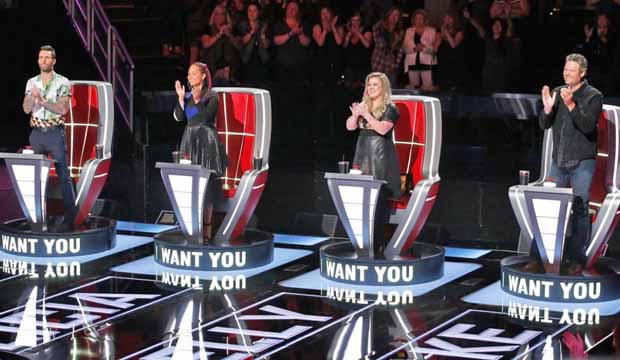 Which performance on Tuesday’s blind auditions episode of “The Voice” will you love the most? As Season 14 moves along, the March 6 episode will be just one hour on NBC. That means an almost certainty that many viewers will once again be mad when a few singers only have mere seconds of their auditions actually featured. Some will still be joining teams, but for others it’s their only time ever to be featured on national television. Enjoy our live updating blog below for this show tonight and make your own comments about the performers and coaching decisions.

Kelly Clarkson is this season’s rookie coach and was a special advisor on Season 13 last fall. She has joined Season 12 coaching champ Alicia Keys, six-time coaching winner Blake Shelton and three-time top coach Adam Levine. Carson Daly has returned as the program’s host and one of its Emmy-winning producers for NBC.

Before watching the newest blind auditions, take a look back at our blog items analyzing every performance from Monday, February 26, Tuesday, February 27 and Monday, March 5.

Over the following weeks, battle round episodes will follow the blinds. Advisors will be Julia Michaels (Team Adam), Trace Adkins (Team Blake), Shawn Mendes (Team Alicia) and Hailee Steinfeld (Team Kelly). The knockout round will follow the battles and then the live episodes where you can vote for your favorites. Once the live playoffs start you will also be able to make picks each week in our predictions center. While that is not yet open for “The Voice,” you can already make predictions for such reality TV shows as “Survivor,” “Project Runway,” Emmy Awards nominations and more.

Live blog below for Tuesday, March 6:

8:00 p.m. – The first three blind audition episodes offered up a diverse, talented group of artists. Will this episode feature the best yet? Kelly is the only coach with her “Block” remaining; a new rule that I think has been an epic failure. No coach that has used their block thus far has been able to win over the artist they were attempting to secure. Now, let’s get to more blind auditions!

8:10 p.m. – First up is Spensha Baker, a 24-year old gospel singer who has been previously signed and dropped by a professional label. Since then she has spent time in Nashville gaining an appreciation for country music. Today she is singing “Black Bird.” It’s no surprise Blake and Kelly were the first to turn their chairs. Spensha has a nice tone but I don’t really feel inspired by this audition. I’m not sure if it was the song or just her performance, but she will have to bring it harder than this if she wants to move further in the competition. After a brief deliberation, Spensha made the obvious choice in Blake. He said she is his favorite artist on his team so far this season.

8:20 p.m. – Next up is Alexa Cappelli, an 18-year old pop artist singing “I’ve Got the Music In Me.” She’s comfortable on stage and has a clear, powerful voice. Adam and Kelly both turned their chairs, but I honestly don’t think Alicia or Blake are losing out on a potential champ here. She’s probably a better fit for Kelly and admitted to being a fan. It was an obvious choice for Alexa to join Team Kelly.

8:30 p.m. – The next artist is a 25-year old cowgirl named Adrian Brannan. She has had training in classical opera but hopes to work with Blake or Kelly and focus on country music. She’s singing “Two More Bottles of Wine,” and has one of the oddest tones I’ve heard. It reminds me of Cher singing at a Honky Tonk saloon. It wasn’t good and nobody turned their chairs. Blake said she needs to work on her annunciation.

8:35 p.m. – Hoping to turn things around is Wilkes, a 33-year old rocker whose vibrant orange locks are courtesy of his hair-dresser wife. He’s singing “One Headlight” and he has a husky tone and seems like someone who could stand out this season. Two-thirds of the way through the song, Wilkes took it up a notch to show off his range, earning simultaneous chair turns from Adam and Blake. Ultimately, Wilkes chose to join Team Blake, much to Adam’s dismay.

8:40 p.m. – A brief snippet of three more auditions was shown, with one artist joining Team Blake and two joining Team Alicia. Adam is the only coach not to score an artist during this episode so far.

8:50 p.m. – Next is Jaron Strom, a 23-year old web designer by day and singer/dancer by night who is inspired by Motown music. Today he’s singing “This Magic Moment,” a song that is an interesting contrast to his contemporary look. He has a good voice for the lead singer of a boy band, not sure if he could be a solo star. Eventually, just Blake turned his chair and seems excited by the young energy of his newest team member.

8:59 p.m. – Terrence Cunningham is the last artist of the night. I’m going to go out on a limb and guess he’ll join Team Adam, since nobody else has tonight. He’s working a front bun haircut for extra pizzazz. With just a keyboard, Terrence is singing a toned down version of “My Girl,” and within about 30 seconds it was a four-chair turn. It’s definitely the most intricate, unique, emotional performance of the night. He knows how to work impressive runs throughout the song without ruining the melody. He’s definitely a star of this season to watch out for. The coaches are going way over the top. Adam even stated he wanted to coach Terrence more than he’s ever wanted to coach anyone else ever. Come on Adam. But the quote, “Divinity entered the room” by Alicia won her the night’s most sought after artist. Dang she’s good at winning over blind auditions! Adam was totally skunked tonight and will have to wait for next week to add to his team.