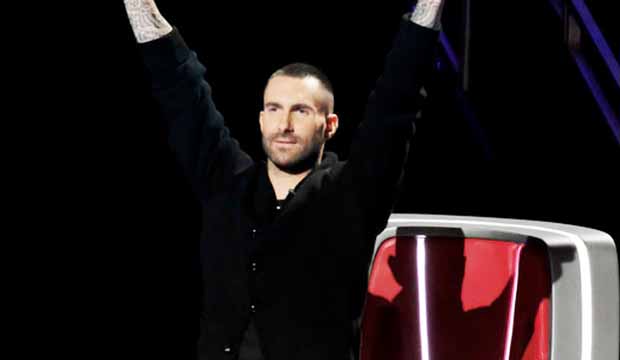 It’s been all the way back to Season 9 that Adam Levine was the winning coach for “The Voice.” But after witnessing the types of artists he claimed last week, especially on Night 4, is Levine making a major comeback for this current Season 15? He is facing off against his longtime nemesis Blake Shelton, last season’s reigning champ Kelly Clarkson and Jennifer Hudson.

And now enjoy our live updating blog item for Monday, October 8, below:

8:00 p.m. – At the start of tonight’s episode, each coach has 7 artists already on their teams, but only Jennifer began the night with her power move left to use: the block! Will she use it to her advantage by stopping another coach from claiming an artist she really wants? Let’s see!

8:02 p.m. – The first artist to sing on Night 5 was a duo from New York, Adam and Jerome of OneUp. They’re a rare duo for the series, something that is typically a surprise for the coaches during the blind auditions. The entire panel was quick to realize that there were two singers when they began singing “Could It Be I’m Falling in Love” by The Spinners, but were much slower to turning their chairs for them. Eventually, in quick succession, Blake, Jennifer and Kelly all hit their buttons giving the two guys a big choice to make. Blake’s pitch to the guys was that he has a proven track record with duos on the show, but they didn’t take the bait and instead joined Team Kelly!

8:14 p.m. – Up next was single mom Natalie Brady from Nashville, where she also plays nightly gigs. She auditioned to Heart‘s “Barracuda,” earning an immediate chair turn from Adam and then quickly getting him to his feet to jam out to her deep and gritty rock vocal. Though she seemed conflicted through most of the performance, Jennifer also pulled the trigger near the end, likening Natalie’s voice to an oncoming train. Adam scolded Kelly and Blake for not turning for her, believing Natalie to be worthy of a four-chair turn. With the two teams to choose from, Natalie went with her early adopter Adam!

8:25 p.m. – Hailing from Arkansas, country artist Hannah Blaylock, who has worked with Rascal Flatts in the past, was next up with her take on “Baby, Now That I’ve Found You” by Alison Krauss. As soon as Blake turned around he recognized Hannah as someone he’s also toured with in the past. Like the other coaches he regretted not hitting his button for her, but they each admit that they were waiting for the last piece of her voice to get them to turn.

8:34 p.m. – Mike Parker from Virginia came to “The Voice” as an opportunity at a second chance after losing his first chance (at college and pro football) due to bad grades. He and his family see his audition to Ne-Yo‘s “So Sick” as a new open door and luckily Jennifer helped him walk through it right at the very last second with her button. Winning him to her team, Jennifer admired Mike’s perseverance, saying that ultimately his determination to continue to sing with everything he had is what won her over in that last second.

8:43 p.m. – Texan Joey Green was the next to perform for the coaches, showing off what he calls his “post-Americana” genre with “Baba O’Riley” by The Who. Choosing such a big song meant that Joey’s voice had to be big, too, and sure enough it had the power to earn Jennifer and Blake’s support. Jennifer readily admitted that Joey is “not her [her] lane,” which Blake used to his advantage, claiming to be in Joey’s lane. Though Blake thought Joey was going to pick Jennifer, it turns out he chose to join Team Blake because he has family from Oklahoma (where Blake is from).

8:54 p.m. – First generation Haitian-American Zaxai learned the value of hard work from his parents who moved their family to New York to build a better life. One note into his rendition of Redbone‘s “Come and Get Your Love,” Jennifer had already hit her button for Zaxai. Kelly also jumped into the fray with her own turn, but unfortunately Jennifer had made the right pick with her block and stopped her from having a chance, successfully winning Zaxai for herself. Funny story, while he was working as an usher at Radio City Music Hall, Kelly accidentally kicked Zaxai in the head so it seems like Jennifer delivered karma tonight!

9:05 p.m. – Erika Zade from Miami was up next to audition with “New Rules” by Dua Lipa. Though her dad had his own career in music, Erika diverges from him in genre by preferring pop to his rock. Erika’s version of the sassy song was arranged a bit slower than the original, allowing her to show a bit of range and more runs. Once Kelly hit her button for her, Erika’s energy picked up and she evoked a cooler side of her personality, but still the other coaches sat it out and let her default to Kelly’s team.

9:18 p.m. – Astrophysicist Jarred Matthew from San Diego sang Al Green‘s “Tired of Being Alone,” a song that represents the way music saved him from the loneliness of a long distance marriage while he was studying. His soulful crooning won over Adam early on and a tiny riff in the middle got Blake to turn around as well. The girls achingly sat this one out, leaving Jarred to choose between the veteran boys. Adam’s pitch was to tell Jarred that he needs help on his falsetto, something Adam specializes in, and that was probably the turning point that encouraged him to join Adam’s team.

9:29 p.m. – Growing up with the intention of becoming a punk band drummer, Sam Robbins eventually fell in love with 70s singer-songwriters, prompting his choice of Jim Croce‘s “Time in a Bottle” as his audition song. With such a soft song, his voice never took off to the place the coaches clearly wanted it to and so he was the second artist of the night to leave the stage without a chair turn. Luckily, Kelsea Ballerini saved Sam by bringing him to “The Comeback Stage” for a chance to win a spot back in the competition.

9:39 p.m. – 21 year old Colton Smith from Alabama used music as therapy when he was younger and felt alone. In that spirit he performed Sia‘s “Alive” and won over his ideal coach, Jennifer. Though he didn’t turn around, Adam was into Colton’s vibe and gave him props for his showmanship.

9:43 p.m. – Right away, Kayley Hill arrived on stage to sing Fleetwood Mac‘s “Gold Dust Woman.” Like Colton before her, Kayley only won over a single coach, but hers was an ecstatic Blake who heard Dolly Parton in her voice, knowing that she had the country blood in the classic rock song.

9:50 p.m. – Kirk Jay shared his story of a humble childhood in Alabama before delivering the final audition of the night to “Bless the Broken Road” by Rascal Flatts. Falling in country line, Blake was the first to turn his chair, only to be followed by Adam. Jennifer and Kelly were a little slower to come around, but managed to give Kirk a four-chair turn in the end. Adam likened Kirk’s voice to Cee Lo Green‘s (mixed with Blake) and certified the night’s bromance by advising Kirk to join Team Blake if he wasn’t going to choose Adam. Ultimately, Kirk was very clear about his intentions of being a country artist, prompting Kelly to once again pitch that she, too, knows country music and could be a good coach for him. At the end of the day, the writing was on the wall and Kirk joined Team Blake as Adam, and the rest of the coaches, pretty much expected.

9:59 p.m. – Who was your favorite artist tonight? And how did they compare to your favorites from the auditions from previous episodes? Sound off in the comments!