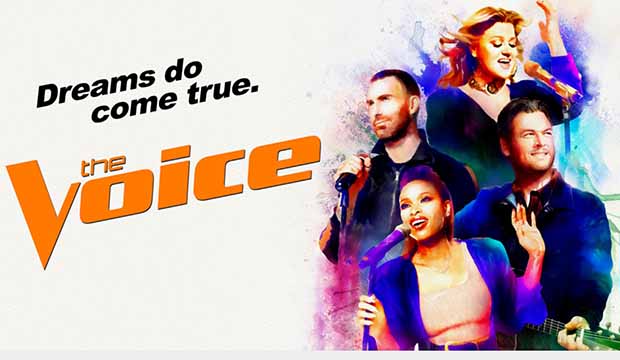 We’re almost to the finish line for the blind auditions of Season 15 for “The Voice.” For Tuesday’s Night 6, it’s just a one hour show that might even feature the dreaded performance montage. But it will somehow not be the complete end of blind auditions as the show will still air a few more next Monday and go directly into the first round of battles.

Watch this episode on NBC for Tuesday, October 9. Six-time coaching champ Blake Shelton, three-time winner Adam Levine, reigning champion Kelly Clarkson and returning coach Jennifer Hudson are facing off each week. Make your own comments in our live updating blog below about the coaches and this week’s contending artists. We’ve got exclusive minute-by-minute detailed analysis of the performances as they are happening. Enjoy reading our coverage of last week’s episodes for Monday, October 24, Tuesday, October 25, Monday, October 1, Tuesday, October 2 and Monday, October 8.

And now enjoy our live updating recap for Tuesday, October 9 below:

8:03 p.m. – Two artists left to fill for Team Blake and Team Jennifer, while there are three slots left for Team Adam and Team Kelly. Our first artist auditioning tonight is Caeland Garner, a 31-year-old country singer form Coleridge, North Carolina. He mentions knowing Red Marlow from Season 13, who was on Team Blake. His audition song is “Dancing in the Moonlight” by King Harvest. Blake and Jennifer converse about liking his smooth voice and turn their chairs concurrently. Blake compares Caeland’s voice to the singer-songwriters of the ’70s like Jim Croce. Jennifer notes that she simply turned because of his “beautiful instrument.” Caeland naturally chooses Blake as his coach.

8:10 p.m. – 24-year-old Madison Cain from Sonoma, California is next. She happens to have a famous father, Jonathan Cain, the keyboardist for Journey who helped write classics like “Don’t Stop Believin'”. She is auditioning with “You Oughta Know” by Alanis Morissette. While the coaches and the audience are rocking alongside her, she does not a get a chair to turn. Kelly observes that she was a bit too perfect-sounding for such an angry, passionate song. Blake humorous adds that she needs some “anger issues.” Madison admits that the nerves got the best of her, ultimately. But wait! Fifth coach Kelsea Ballerini has chosen Madison as her final artist for The Comeback Stage, so this won’t be the last we see of her!

8:19 p.m. – Lela, who is just 15 years old, hails from Miami, Florida and lives with her big Colombian family. She’s singing the popular “Havana” by Camila Cabello feat. Young Thug. Kelly loves the song choice right off the bat and vibes with her, turning her chair eagerly. After some consideration upon listening to Lela’s vocal runs, Jennifer decides to turn her chair right before she’s finished. Kelly finds Lela refreshing compared to what’s on the radio now and Jennifer agrees. Kelly says she wants Lela to to keep going the bilingual route. But ultimately Lela goes with Team JHud as her coach!

8:30 p.m. – Cody Ray Raymond may be just 26, but he’s lived a lot of life. The Seattle, Washington native is a martial arts expert, veteran and street musician, and now he’s auditioning with the classic blues song “Born Under a Bad Sign” by Albert King. All four coaches are loving his bluesy voice, with Kelly turning first followed by Jennifer. Ultimately they are the only coaches to turn, but all four clearly love his overall vibe. He mentions living in the North Pole for a year while serving, which the coaches are also impressed by. Kelly is fascinated by how he translated his story into his music. Jennifer says he has a cool melody in his voice that helps tell his story. Cody Ray picks Kelly as his coach!

8:42 p.m. – 23-year-old Jake Wells from Kansas City, Missouri is up next. He has roots in gospel music and comes from a large family. He is singing “When the Stars Go Blue” by Ryan Adams, a song which Kelly immediately says she loves. The low-key audition does not inspire too many thoughts from the coaches, but Adam decides to turn at the last second. Adam says that Jake is “different” enough that he felt inspired to turn. He says Jake had the most unique tone he had heard so far in Season 15. Blake regrets not turning.

8:44 p.m. – Next up is Abby Cates, 17, from Cincinnati, Ohio. With experience working as a character actress at children’s parties, she also discusses breaking vertebrae after an accident. Abby is singing “Scars to Your Beautiful” by Alessia Cara, which Kelly immediately responds to, turning her chair very early. No other coaches turn, but Jennifer clearly loves the high range of Abby’s voice. Kelly says she loves Abby’s tone and gifts her with her custom Team Kelly jacket.

8:52 p.m. – The last artist of the night is Funsho, a 28-year-old born in Lagos, Nigeria. At seven, he and his family moved to America and assimilated into the culture, with Funsho auditioning for talent shows. He is singing “Finesse” by Bruno Mars for his audition, and the judges immediately take to his smooth, funky vibe. Adam turns his chair first, followed quickly by Jennifer. Kelly grooves to the song and turns her chair next. All three stand up and dance as Funsho sings, clearly loving his charismatic take on the song. Adam calls Blake an idiot for not turning his chair and says Funsho is one of the best vocalists they’ve heard so far. Kelly commends Funsho for performing such a well-known song with confidence. Jennifer says Funsho was able to impressively “ride every note” even with such an uptempo song. In the end, Funsho chooses Team Adam! And with that, Night 6 of Season 15’s Blind Auditions is over! One more audition episode to go.