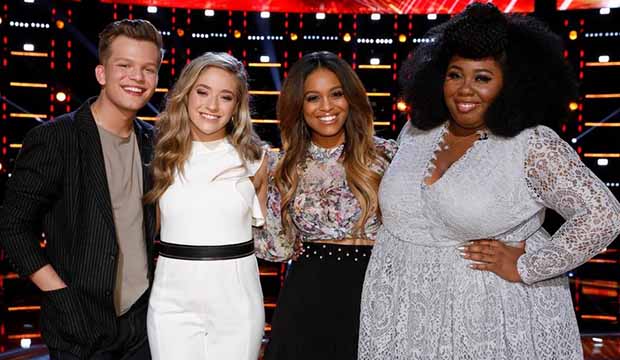 The Top 4 artists on “The Voice” each sang three songs on the two-hour final on Monday May 21. They performed a solo, a duet with their coach and an original tune. The goal for each of these would-be winners of season 14 is to make it into the top 10 on iTunes by Tuesday morning so that they can reap the benefit of a vote multiplier. Who do you predict will win season 14 of “The Voice” on Tuesday?

Blake Shelton is looking for his seventh win as a coach and he has two well-regarded artists (Spensha Baker and Kyla Jade) in the final. Kelly Clarkson is a rookie but has a strong contender in Brynn Cartelli while Alicia Keys is hoping that third time as a coach is a charm for her entry Britton Buchanan. The fourth coach, Adam Levine, is on the sidelines as his last act was eliminated on May 15.

Review the roster of songs that the Top 4 sang on the final and then vote in our poll below as to who was the best (and worst). And be sure to sound off in the comments section about your favorites and those that you were glad to see go.

Britton Buchanan (Team Alicia Keys)
Solo: “Good Lovin'” by the Young Rascals
Coach Duet: “Wake Me Up” by Avicii
Winner’s Single: “Where You Come From”

Kyla Jade (Team Blake Shelton)
Solo: “With a Little Help from My Friends” by The Beatles
Coach Duet: “Only Love” by Wynonna
Winner’s Single: “The Last Year”

Which of these Top 4 artists do you think will win “The Voice” this season? Make your predictions as to who will come out on top and who will be eliminated this week. You can keep changing your predictions until just before the live result shows air. You’ll compete to win bragging rights and a $100 Amazon gift certificate on any shows with live episodes. See our contest rules and sound off with other fans in our reality TV forum.