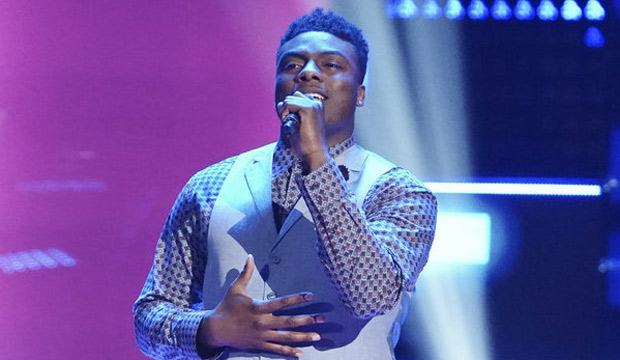 The live shows continued Monday night of “The Voice” and, for the first time this season, the performances were made available for download and streaming across Apple Music. Leading the pack was Team Blake Shelton‘s Kirk Jay, who peaked at #10 on the overall chart with his heartfelt ballad, “I’m Already There” (watch the performance). Since Kirk was within the Top 10 at the close of voting, he earned bonus points, doubling his number of votes received from streaming.

Seven other artists cracked the Top 200 singles on iTunes. Team Adam Levine‘s Reagan Strange topped out at #23 with “You Say,” while her teammate Tyke James was right behind her at #24 with “(Everything I Do) I Do it For You.” Team Kelly Clarkson‘s Chevel Shepherd landed at #38 with her sassy rendition of “Little White Church,” while Team Blake’s Chris Kroeze reached #56 with his emotional performance of “Let it Be.”

The top performer from Team Jennifer Hudson was 13-year old Kennedy Holmes, who hit #81 with her cover of “Wind Beneath My Wings.” Team Kelly’s Sarah Grace was next with her version of “Goodbye Yellow Brick Road” reaching #124. The last artist to appear in the Top 200 was Team Adam’s DeAndre Nico at #146 with “I Can Only Imagine.”

Emphasis should definitely be placed on the overall Top 200 chart when examining how each artist is performing with the public. Although not every artist made that chart, we can look to less inclusive charts to see how others may have stacked up against the competition. If you dive deeper into the Pop category, Team Kelly’s Lynnea Moorer popped up at #46 with “Wolves,” while Team Jennifer’s Sandyredd landed at #65 with “It’s So Hard to Say Goodbye to Yesterday.” They both trailed behind Reagan and Kennedy here.

On the country chart, Team Blake’s Dave Fenley was at #49 with “Hard to Love,” trailing Kirk, Chevel and Chris. On the R&B charts, Team Jennifer’s MaKenzie Thomas peaked at #9 with “I am Changing” while Team Kelly’s Kymberli Joye landed at #14 with her rendition of “Diamonds.” Although these numbers are helpful, we aren’t certain how artists who only appear on these more segmented charts stack up against each other.

On Tuesday, November 20 two of these artists will be sent home. Based on their chart performances, we can predict with reasonable confidence that Kirk, Reagan, Tyke, Chevel and Chris should be safe. While Apple Music streaming only makes up a small portion of the overall vote count, these artists seem to have struck a strong enough cord with the public to guarantee their safety this week. Which two artists do you think will be sent packing tonight? Sound off in the comments!

Be sure to make your predictions to influence our reality TV racetrack odds. You can keep changing your predictions until just before the next live episode airs on NBC. You’ll compete to win a $100 Amazon gift card and a spot on our leaderboard. See our contest rules and sound off with other fans in our reality TV forum. Read more Gold Derby entertainment news.