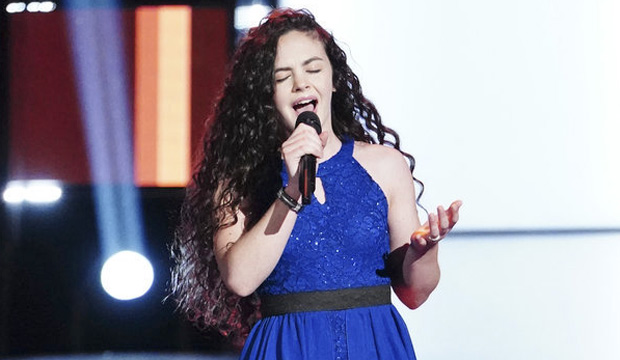 During Monday’s episode of “The Voice,” Kelly Clarkson paired up Sarah Grace and Chevel Shepherd in the latest knockout round of Season 15. Sarah performed Dixie Chicks‘ “Travelin’ Soldier” in front of the four reality TV coaches while Chevel took on Etta James‘ “I’d Rather Go Blind.” Kelly’s surprising decision was to keep one of them (Chevel) and use her “Save” on the other (Sarah). Are you happy Kelly kept both young artists on her team? Read the coaches’ comments below.

SEEBlake Shelton names Dave Fenley the winner of ‘The Voice’ knockouts, but who swoops in to steal Kameron Marlowe? [WATCH]

“You both did pick bold, fearless songs,” Kelly told Chevel and Sarah. “I’m glad that [Blake Shelton] pointed that out, because I only want bold and fearless humans on my team. So this is very difficult for me. I think my heart has to go with whoever I think is ready to go in right now and battle against these older people on this show. It’s hard when you’re so young. The winner of this knockout is Chevel.” Backstage, Kelly explained her choice further by saying, “Chevel? Ain’t nobody like her in country music. She is a force. Sixteen-year-old girl nailing Dixie Chicks? It’s over.”

Before Sarah could walk off the stage and head back home, Kelly pressed her “Save” button to keep Sarah on her team. “I can’t let you go!” Kelly shouted to her young artist. “You stand apart from everyone on the show in the sense that you’re such an old soul. You’re doing something that no one else on the show is doing and it’s really important.”

SEENerve-wracking! Abby Cates sings Kelly Clarkson’s ‘Because of You’ during ‘The Voice’ knockouts in front of Kelly herself [WATCH]

In his “The Voice” live blog, our recapper John Benutty had this to say about the knockout: “Prior to their performances Kelly said that the winner would be the one that displays the most confidence and ownership over the song. With that in mind, Chevel was a bit timid on stage while Sarah Grace seemed much more comfortable and used the stage and audience to her benefit. Adam gave the edge to Chevel, but Blake called Sarah ‘magnetic’ and he and Jennifer both advised Kelly to choose her. Declaring that she only wants bold artists on her team who are ‘ready to go in right now,’ Kelly picked Chevel! But… but… but it wasn’t the end of the line for Sarah Grace because Kelly saved her and kept her on Team Kelly!”