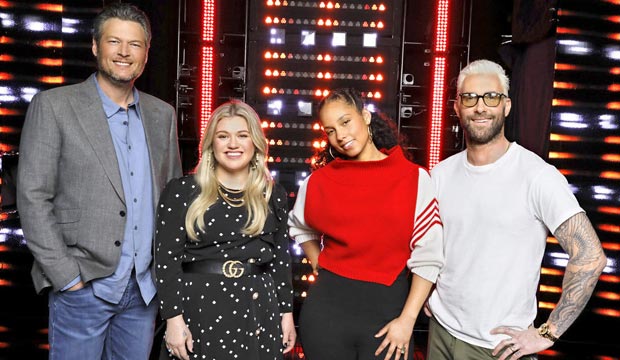 The knockout rounds for “The Voice” begin on Monday, April 2, and we’ve once again got you completely covered with in-the-moment analysis as each artist performs. A special feature for Season 14 is that four past winners will return as special advisors to each coach. The ones assisting are Jordan Smith for Team Adam Levine, Chris Blue for Team Alicia Keys, Cassadee Pope for Team Kelly Clarkson and reigning champ Chloe Kohanski for Team Blake Shelton.

The recently concluded battle rounds featured coach pairings of singers with duets. The knockout rounds also are selected by coaches but with a completely different format: each competitor performs a song of their choice against another artist and is then evaluated by the coach. One advances to the Top 20 live show while the other goes home. Each coach does have one steal during this round to save somebody. Remember that Chloe, the winner for Season 13, was actually eliminated by coach Miley Cyrus but then stolen by Team Blake (so there is hope).

And now enjoy our fun recap of Night 1 on Monday. Our live updating blog starts below for this show tonight, so make your own comments about the performers and coaching decisions.

Once the live playoffs start you will also be able to make picks for “The Voice” eliminations each week in our predictions center. You can also predict who will be the overall Season 14 champion and which coach will prevail. While that is not yet open for “The Voice,” you can already make predictions for such reality TV shows as “Survivor” Emmy Awards nominations, Daytime Emmys and more.

Live blog below for Monday, April 2:

8:01 p.m. – Blake says that he’s been lobbying for the new “knockout save” for the entire run of the show–let’s see if his dream coming true has made for a more compelling round! He’s up first with a knockout between Jaclyn Lovey and Kyla Jade.

8:04 p.m. – Kyla chose to sing “You Don’t Own Me” by Lesley Gore tonight, a song she hopes will show women that they can stand up for themselves. Jaclyn’s choice is “Put Your Records On” by Corinne Bailey Rae in hopes that it will prove to Blake that he didn’t waste one of his steals on her. With her performance, Jaclyn found the perfect song to show the tenderness of her voice and to let a bubbly stage personality come out. Taking on a more dramatic song, Kyla’s performance was bigger and had more vocal acrobatics, but allowed much less room for her to use the entire stage.

8:13 p.m. – Despite learning to appreciate Jaclyn’s strengths as a singer, Blake decided that Kyla has the ability to make an audience feel what she’s singing and therefore awarded her the win and a trip to the live shows.

8:17 p.m. – Kelly’s first pairing is Justin Kilgore vs. Kaleb Lee, a matchup she decided out of worry that if she kept two male country artists on her team that the votes would be split between the two in the live shows. Justin’s song is the Garth Brooks version of Billy Joel‘s “Shameless,” a bold choice that Cassadee thought needed a bigger performance than Justin provided in rehearsals. Kaleb, one of Kelly’s steals in the battles, chose to take on “Free” by Zac Brown Band, a song he hopes allows him to show off the emotional side of his artistry.

8:22 p.m. – With guitar in hand, Kaleb’s performance was classically country, even down to the rasp in his voice and the soaring heights of the chorus. Perhaps due to his experience with pop music and surely because of nerves, Justin’s rendition felt less natural and his vocal delivery suffered in moments.  In his critique, Adam pointed out that Justin’s style felt more intense than the song was asking of him. Despite thinking that Justin improved upon his nervousness and having been a part of her team all along, Kelly gave the knockout win the Kaleb for delivering his best performance of the season so far.

8:38 p.m. – Jackie Foster and Mia Boostrom are Adam’s first knockout pair, two pop artists with an edge to their music. Jackie wants to be an alternative rock singer so she’s chosen “Bring Me to Life” by Evanescence for her performance, but Jordan advises her to make sure she shows some of the softer parts of the song instead of just relying on the louder moments. Mia’s song tonight is “Wade in the Water” by Eva Cassidy, a soulful track that shows off her power and grit all at once.

8:43 p.m. – Facing the daunting task of a song as big as “Bring Me to Life,” Jackie managed to bring both the intensity and vocal sturdiness required of it, but also showed off a charismatic stage presence that I didn’t expect. Mia’s performance was equally complete, serving flawless vocals with an ease and comfort and stage. Jackie’s performance earned the support of both Kelly and Alicia in critiques, but Blake gave the edge to Mia.

8:53 p.m. – With the decision on his shoulders alone, Adam agreed with Blake and gave Mia the win! But he wasn’t done with Jackie because he hit his save for her… moments after Kelly hit her steal button for her! But before he could argue for her, Blake hit his steal button! Between the coaches, the final decision was up to Jackie, but then before Blake could finish his own pitch… Alicia hit her steal button, giving Mia a fourth coach to choose from!

9:01 p.m. – Proving that it’s never too late to hit your button, Jackie chose to join Team Alicia! Jackie says that Alicia’s pitch about rock music coming from the blues is what spoke to her and that Alicia consistently attempting to get Jackie on her team meant something to her.

9:03 p.m. – Next, Blake brings Austin Giorgio and Spensha Baker to the stage his second knockout of the night. Because it suits his style, Austin will sing “Almost Like Being in Love” by Nat King Cole while Spensha will do Chris Stapleton‘s “Broken Halos” because it speaks to a recent loss she’s felt in her own life.

9:07 p.m. – Proving that he has more confidence than anyone else in the competition, Austin’s performance was exactly that… a performance. He slid and swayed across the stage with the ease and pride of another era and was effortlessly charming in doing so without ever sacrificing the quality of his voice. But if Austin’s show had one downside it’s that it felt a little detached from authenticity, especially when compared to Spensha’s more intimately personal performance. The emotion drove Spensha’s delivery and had a rawness that really made her stand out.

9:16 p.m. – The critiques for the two artists couldn’t be more different–Spencer received praise for his use of the stage and Spensha gave the coaches the impression that there was still more discover about her abilities. Blake was inspired by Spensha’s connection to the song and chose her to continue to work with him on the show. He also called her one of the most important artists capable of tearing down walls in country music. Yet, unwilling to let the “one of a kind” Austin go, Blake hit his one save for him, unchallenged by any of the other coaches!

9:23 p.m. – For her first knockout Alicia has paired Johnny Bliss against Miya Bass, two artists with big personalities that she expects to deliver high entertainment value. Johnny has chosen to sing Sia‘s “Alive,” an ambitious vocal that speaks to the way Johnny sees music as a savior of his life. Miya, in an attempt to connect to a pop-soul vibe, selected Ed Sheeran‘s “Castle on the Hill.”

9:28 p.m. – Taking the advice of Chris and Alicia to let the song slowly build, Johnny created a moment with the way his performance exploded in the middle. His inclusion of Spanish lyrics at the end echoes a trend among “Voice” contestants that we’ve seen for the last few seasons, but still managed to feel authentic so I didn’t mind it. Unlike Johnny’s song, Miya’s stayed on the same level from beginning to end, allowing her to give a more consistent vocal, but creating less surprises and certainly including less risk.

9:37 p.m. – The coaches, including Miya’s former coach Adam, agreed that Johnny gave the better performance after Miya failed to live up to the potential of her voice. For that reason, it became hard for Alicia to disagree with the consensus and so she elected to keep Johnny going forward.

9:39 p.m. – And for the last knockout of the night, Adam brings together Drew Cole and Jackie Verna to prove to him which can make the most of their potential. Drew picked Niall Horan‘s “Slow Hands” to show off his soft pop rock style and Adam thinks it was the perfect song for his voice. Jackie is competing with Lady Antebellum‘s “American Honey,” a song that reminds her of her journey to “The Voice” stage.

9:48 p.m. – Drew’s performance was really smooth despite the static nature of remaining behind the guitar and mic for the entirety. He focused on his vocal performance more than giving a memorable stage performance, but in doing that he delivered a solid rendition of the song. Jackie, on the other hand, felt a little more accessible and free on stage.

9:54 p.m. – The panel of coaches called the match-up an even split, but Adam had to pick one winner and he landed on Jackie for her sincerity, but refused to let Drew go, hitting his save for him. Not to be left out, Blake hit his steal button, wanting to bring Drew’s “true artistry” to his own team. With the decision in Drew’s hands, he remained loyal and stayed on Team Adam.