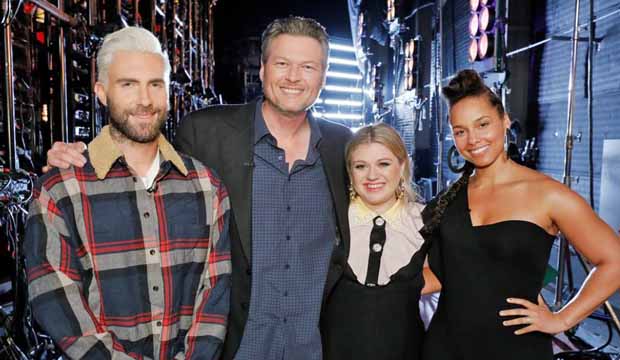 For the first time in “The Voice” history, coaches were able to save artists during the knockout round on Monday night. That new feature will continue on the next three episodes as the knockouts continue Tuesday and next week on the long-running NBC reality TV show. Coach Blake Shelton used his first save on Monday for Austin Giorgio, while coach Adam Levine saved Drew Cole for his team. What do you think of this “save” opportunity for the coaches this season?

A steal is also still available to each coach, and Alicia Keys took away Jackie Foster from Team Adam on this first round of knockouts. Enjoy our complete analysis from this episode on Monday, April 2, plus our recent battle round articles from Night 1 on March 19, Night 2 on March 20, Night 3 on March 26 and Night 4 on March 27.

The recently concluded battle rounds featured coach pairings of singers with duets. The knockout rounds also are selected by coaches but with a completely different format: each competitor performs a song of their choice against another artist and is then evaluated by the coach. One advances to the Top 24 live show while the other goes home.

Another special addition for Season 14 is that four past winners have returned as special advisors to each coach. The ones assisting are Jordan Smith for Team Adam, Chris Blue for Team Alicia, Cassadee Pope for Team Kelly Clarkson and reigning champ Chloe Kohanski for Team Blake.

And now enjoy our fun recap of Night 2 on Tuesday. Our live updating blog starts below with a full recap for this show tonight, so make your own comments about the performers and coaching decisions.

Once the live playoffs start on April 16, you will also be able to make picks for “The Voice” eliminations each week in our predictions center. You can also predict who will be the overall Season 14 champion and which coach will prevail. While that is not yet open for “The Voice,” you can already make predictions for such reality TV shows as “Survivor” Emmy Awards nominations, Daytime Emmys and more.

Live blog below for Tuesday, April 3:

8:05 p.m. – Team Kelly’s first pairing of the night is Brynn Cartelli versus Jamella. Brynn is only 14 years old, but she feels confident enough to sing the powerful song “Here Comes Goodbye.” Cassadee is blown away by her voice, but Kelly fears Brynn could go off pitch at times. Jamella is a pop/R&B singer but wants to sing something out of the box with “Girl Crush.” By singing a country song, she can add her own flare. Cassadee thinks her song choice is bold and Kelly instructed Jamella how to push enough air through her lungs to stay in key.

8:10 p.m. – Brynn is up first wearing an elegant orange dress and sounding more mature than a 14-year old should. Her poise is striking, but she does have moments where her pitch wavers. Overall, the performance was just okay for me but the coaches look blown away by this youngster.

8:15 p.m. – Right off the bat, Jamella has the advantage of singing a beast of song that everyone loves. I love how she uses the lower register of her voice. Many singers are only comfortable belting. She does have a tendency to go off key though and she missed the big note. In conclusion, I would choose Brynn as the winner of this knockout.

8:20 p.m. – Alicia likes Jamella’s vibe, but also appreciates Brynn’s ability for her age. Adam said he would choose Brynn because when she sings it is like “game over.” Blake found their song choices interesting and thought Jamella put her own spin on “Girl Crush.” He loves the vibrato of Brynn’s voice and said she is one of his favorites this season. Kelly said Jamella has a connection to music you can’t teach, but Brynn is the winner of this knockout! Kelly said Brynn WILL be the youngest person to ever win this show. Jamella was not stolen and has been eliminated from the competition.

8:25 p.m. – Jaron Strom and Pryor Baird will face off next for Team Blake. Jaron is going to sing “Grenade,” which is an ambitious choice. The young pop singer has a “cool factor” on stage and Chloe complimented his charisma. Pryor is singing “Will It Go Round in Circles,” which he feels embodies what he does as an artist. Blake is happy with the song choice because it shows which direction he wants to go in. Chloe said she was on the edge of her seat while he sang.

8:30 p.m. – Pryor is up first and his experience is immediately apparent. He has an incredible ease on stage and his soulful vocals are fun to listen to. If I had a criticism it would be that he doesn’t strike me as a star. He sounds more like someone you hear in a fun bar. That being said, it’s difficult to argue that he doesn’t belong on this show.

8:35 p.m. – Jaron is up next singing “Grenade” and as I suspected, he doesn’t have the chops to pull off a Bruno Mars song. He is sort of screaming his way through the song. He is basically the opposite of Pryor in that he looks like a star, but doesn’t have a great voice. I would choose Pryor as the winner of this battle.

8:37 p.m. – Kelly loves Pryor’s tone and compared him to Janis Joplin. Alicia loves Pryor’s grit and told Jaron he appeared to be more interested in capturing the attention of the crowd than delivering the song. Adam said Pryor is “ready” and he would choose him as the winner. Blake has an easy choice. The winner of this knockout is Pryor! Jaron was not stolen and was eliminated from the competition.

8:45 p.m. – The next knockout is Team Alicia’s Terrence Cunningham versus Christiana Danielle. I’m a bit surprised Alicia pitted these two against each other because both are seen as front-runners. I guess you could argue they are within the same genre and perhaps Alicia wants to keep her team diverse. My guess is this knockout will lead to either a save or a steal. Christiana is singing “Elastic Heart” by Sia. She relates to the lyrics about beings strong in difficult situations. Chris felt like “chocolate under a hot lamp” when he heard Christiana sing. Terrence has chosen to sing “Tell Me Something Good.” Up until now he has chosen to sing more smooth songs and he’s excited to do something more gritty. Alicia told Terrence he needs to exude more sex appeal with this song.

8:50 p.m. – Christiana is set to perform first and she looks absolutely stunning! Her voice cuts through the room like a knife when she sings and I believe every lyric that comes from her mouth. At times, her delivery can pull away from the melody so I might prefer if she reign it in a bit, but there is no way she can leave this competition today!

8:55 p.m. – Terrence takes his seat behind the piano and I just know this guy is going to kill it! The ease with which the notes just come out of him is hypnotizing. At one point he hit a high note and Kelly just jumped out of her chair. This man is like watching Stevie Wonder in his prime. Terrence is simply on a whole other level in this competition and could easily become Alicia’s second straight champion. I love Christiana, but Terrence is my winner of this knockout!

8:59 p.m. – Adam said Christiana will find her way and be one of the best. Then he said he said Terrence was just off the charts. Kelly had total “church giggles” and couldn’t control herself watching Terrence. She said Christiana was absolutely captivating and the two of them are equally talented. Blake said Christiana had difficulty during the first verse of her song and Terrence delivered a complete performance. Alicia congratulated them both and said there are no losers in this knockout. But the winner is Terrence! Shortly after Alicia announced his win, Alicia pushed her save button! Not to be written off, Kelly pushed her steal button and told Christiana, “perhaps you want to be someone’s first choice.” Them are fightin’ words! And then Adam hit his steal button as well! Adam said he respects and loves Christiana. Alicia said that she would be devastated to lose Christiana and begs her to stay. With little thought, Christiana remained loyal and chose to stay on Team Alicia!