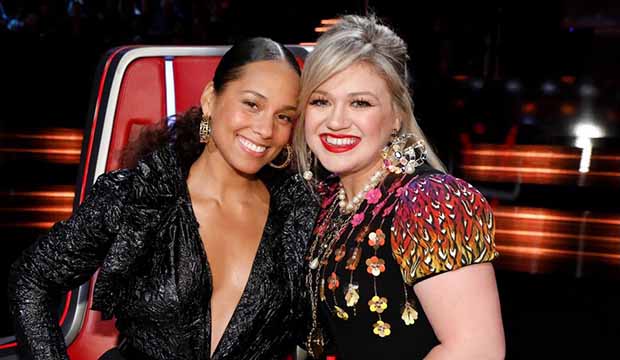 The five artists from the teams of Blake Shelton and Alicia Keys performed Tuesday night on the second round of live playoffs for “The Voice.” That means we have the other 10 singers covering the teams for Kelly Clarkson and Adam Levine on tap for the episode on Wednesday, April 18. And at the end of that one-hour program, we’ll all find out which eight of these 20 competitors will advance to the Top 12 next Monday.

Based on Monday’s first live show of Season 14, we already know four of the artists in the Top 12: Kyla Jade for Team Blake, Britton Buchanan for Team Alicia, Brynn Cartelli for Team Kelly and Sharane Calister for Team Adam. None of those contenders had to perform the rest of this week. Enjoy our full coverage of the Monday episode and Tuesday episode from this week before watching the bonus installment on Wednesday.

Contributors John Benutty and Denton Davidson joined Gold Derby managing editor Chris Beachum recently to discuss all four teams, predicting which singers will advance to the Top 12 on April 23 and which ones will be eliminated on the three episodes this week. Watch our slugfests about Team Kelly, Team Adam, Team Alicia and Team Blake.

Live updating recap and analysis below for Wednesday, April 18:

8:00 p.m. – Eight spots remain in the Top 12 and tonight Team Adam and Team Kelly will lay down their best vocals in an attempt to earn one of those coveted positions. At the end of tonight’s episode, a gut-wrenching 12 artists will be eliminated of which some are certain to be fan favorites. Let’s get started!

8:05 p.m. – Kaleb Lee from Team Kelly is up first with “Die a Happy Man” by Thomas Rhett. This song was a massive hit on the country charts so I applaud the song selection. Kaleb has solid pipes but he’s lacking the charisma former country standouts have had from the country genre. Kelly looks absolutely thrilled with his performance, but no other coaches stood up to applaud. I’m not sure he will be voted through based on that, but he’s definitely an option for Kelly to save.

8:10 p.m. – Alexa Cappelli is up next with “Stop and Stare.” She’s powering through the song with formidable vocals and I love the emotion she’s pouring into it. That being said, Alexa is sort of in the same lane as Brynn, who is a front-runner to win the season. For that reason, I just don’t see room for Alexa on Team Kelly. Kelly burst into tears following Alexa’s performance. She said she was caught up in the emotion, but I’m sensing the tears came out of sadness that this will be Alexa’s last performance on “The Voice.”

8:15 p.m. – Up next is D.R. King with “All on My Mind.” D.R. was long considered the top contender from Team Kelly, but song selection continues to be iffy for the powerhouse vocalist. Once again, I just don’t see this song inspiring fans to vote. His voice is incredible, but he’s just not as sophisticated as his direct competitors in the soul department over on Team Alicia. Kelly pleaded with America to vote for him and I believe she is sincere in that request.

8:20 p.m. – Dylan Hartigan is quickly becoming the heartthrob of Season 14 and he made a phenomenal song choice with “Last Dance with Mary Jane.” He’s not the strongest singer in the competition, but the man has charisma for days and he’s at least hitting all the right notes. I wouldn’t be even slightly surprised to him see advance by popular vote at the end of tonight’s episode. Kelly mentioned Dylan’s beautiful package sometimes distracts from his incredible vocal range. Interesting choice of words, but I agree, Dylan should not be underestimated!

8:25 p.m. – The last artist up for Team Kelly is Tish Haynes Keys. Tish is another artist who could win her spot outright with the right song or potentially win Kelly over for the final save. At one point this season, Kelly stated “You can’t not save Tish!” Will that hold true tonight? Tish is singing Etta James’ torch song “At Last” so hold on to your seats! She’s such a seasoned vocalist with so much texture to her voice, and when she hits the chorus you can feel the desperation in her voice. I love it! Overall, I don’t think it was as powerful as Monday’s performance, but a solid rendition from the diva. Is it enough to win America’s vote? I have doubts. I sense Kaleb and Dylan will be duking it out for that.

8:30 p.m. – First up for Team Adam is Reid Umstaddt with “Long Tall Woman in a Black Dress.” Reid’s voice is near perfection when it comes to these classic rock jams. He’s got a great sense for which songs to choose, but he lacks a certain amount of stage presence. If I was fighting for America’s vote, I might choose a ballad of some sort or something with more emotion, but this is fun too. Is it enough? We will soon find out. Adam said he couldn’t be happier with the outcome of that performance.

8:35 p.m. – Up next country singer Jackie Verna is performing “Once.” Jackie flew under the radar throughout most of the season but I have found her refreshing to watch this week. She has a classic, delicate country voice but is powering her way through this number. I preferred her Monday night performance, but if she is able to advance I think she could grow tremendously as the season progresses. Adam seems passionate about Jackie, saying she’s “one in a billion” so perhaps he will save her if the opportunity arises? I do think the country lane is up for grabs this season so it could be a smart move.

8:40 p.m. – Next with “Wild Horses” is pop-rocker Drew Cole. This is a brilliant song choice that could give him the edge he needs after Monday night’s mediocre performance. I feel like he’s battling Reid for the same place on Team Adam and I can’t imagine both going through. I would say with this song, Drew has taken the advantage. He’s charismatic, he’s got great hair and he’s modern. Vocally, he’s not perfect but that was a solid performance. Adam talked more about himself than Drew following the performance, so I’m not sure how much he loved it.

8:45 p.m. – Mia Boostrom is next singing “Either Way.” Vocally she is so unique. There is nobody that sounds remotely like her on this series and I am in love with her lower register. Mia really strained through that performance, but it wasn’t a bad thing in this instance. She’s got such a soulful voice she simply has to advance. I’m convinced there is no chance Adam will let her go.

8:50 p.m. – Last to perform for Team Adam is Rayshun LaMarr with “I’m Going Down.” This is a fantastic song choice for Rayshun, who can barely contain his energy on stage. It lets him work the crowd and belt out the chorus in that way only he can. He’s like a possessed animal tonight! I had completely written off Rayshun after Monday night, but he may have just put himself right back in the mix! All four coaches are on their feet and the crowd has gone completely insane. Wow! What a comeback. Bravo Rayshun! I retract my prediction that he would be eliminated tonight.

8:52 p.m. – The results are next! I have to just say the only team I am dreading to hear about is Team Alicia. If it were up to me her entire team would advance. I can’t believe three of them are about to be eliminated. I’d like to pitch a new rule to “The Voice” producers. Let the coaches convene and bring back one artist so it’s a Top 13 instead of a Top 12. Team Alicia is too strong to be cut in half! Okay, that ends my rant.

8:55 p.m. – Team Blake is first in the hot seat. The artist who received the most votes and is advancing to the Top 12 is…Pryor Baird! I sort of thought Wilkes would have won that, but Pryor is a worthy contender. Blake has chosen to save Spensha Baker!

8:56 p.m. – From Team Kelly America saved…Kaleb Lee! Kelly looks sick to her stomach as she ponders what to do and eventually begins to cry. But Kelly finally decided to save D.R King!

8:58 p.m. – From Team Alicia, America saved…Jackie Foster! Now is the moment I’ve been dreading all night. Alicia called this moment “atrocious” and I completely agree. This is gut-wrenching! Alicia decided to go with her heart and chose Christiana Danielle! Wow! I’m so happy for Christiana but I’m disgusted Terrence Cunningham was just let go. How could this happen? I do feel like Christiana was the correct decision in this instance though.

8:59 p.m. – On Team Adam, Rayshun LaMarr was first to move forward! Next Adam stunned the crowd when he chose to save Jackie Verna! I’m actually not totally shocked by that choice, Jackie has a beautiful voice. But I’m disappointed Mia was let go, her voice is so unique. What a whirlwind of a night! The talent that went home is astonishing. Total carnage. Nonetheless, we have a tremendous Top 12 to look forward to next week and it should be a fantastic season.