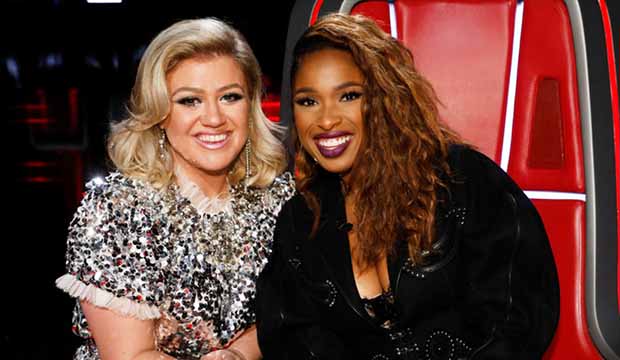 It’s the most dreaded night for “The Voice” singers each season — the first results show of the live shows! Tuesday’s episode is set for a mass elimination of 13 singers who will be gone over the course of the one-hour show hosted by Carson Daly on NBC.

After weeks of pre-recorded episodes of the long-running Emmy-winning reality TV series, Season 15 jumped into live shows for Monday evening. All 24 remaining contestants sang with the public voting at home. Read our full recap of this exciting two-hour episode. Two artists from each team will be saved by these votes. One artist on each team will then be saved by his or her coach.

That brings us up to 12 singers advancing to the next round on Monday, November 19. Another new feature on this results show: two remaining Comeback Stage artists from bonus coach Kelsea Ballerini will perform to provide a 13th contender in the next round.

Here are the remaining contestants going into Tuesday’s results show:

And now enjoy our live updating recap blog for Tuesday, November 13 below:

8:00 p.m. – I think we all agree that Team JHud was the overall best of the night on Monday’s performance show, right? But that’s of little consequence tonight because each team will only advance three artists. I’m both excited and nervous to find out who will make it through! Let’s gooo!

8:02 p.m. – Prior to hearing the results all four coaches offered some words of wisdom to the artists, saying that it’s already a huge accomplishment that they got this far and that it’s a huge opportunity even for those eliminated tonight.

8:04 p.m. – The first team to hear some results was Team Blake. Carson named the two artists that received the most viewer votes and would automatically advance to the top 13: Kirk Jay and Chris Kroeze!

8:06 p.m. – With four artists left standing, Blake had to choose which to save and send on to the next round. His decision came down to Dave Fenley. Congrats to Dave, but he’s so similar to Chris that I think Blake made a huge mistake. That being said, Kirk is his clear frontrunner and neither of them will siphon attention away from him!

8:10 p.m. – After the break Kane Brown arrived to perform his new single “Lose It.” I love that he’s hear because in the last few seasons the show has made a conscious effort to contribute to the trend in country music of embracing artists outside of the norm. Kane is one of those that is successful in the genre–I mean, he’s got a bomber jacket, tats on his neck and a nicely cut fade!

8:13 p.m. – The next group of artists to receive their results was Team Adam. His top two artists based on votes alone were: DeAndre Nico and Reagan Strange!

8:15 p.m. – Adam thought it was too early to be forced to make this decision, telling the four left that he thinks they all have so much more do on the show. But he had to choose and so he went with the person that he doesn’t want to say “what if” about: Tyke James! Wow. I am shocked he let Kameron go! I thought he was one of the best (after Reagan of course). Flabbergasted.

8:22 p.m. – To decide the 13th finalist, Kelsea’s choices for a comeback Ayanna Joni and Lynnea Moorer were reintroduced to the audience with clips showing their progress in the side competition to get to this point. To earn the final spot it worked just like the Instant Save with performances and then a live Twitter vote.

8:24 p.m. – First up was Ayanna with Ariana Grande‘s “No Tears Left to Cry.” It’s an interesting song choice because it didn’t provide many opportunities for her to show off her vocal ability, but at the same time it’s hugely popular and Ariana just scored her own first #1 on the Hot 100 chart. Vocally her voice was shaky and thin, but she also had trouble staying on top of the tempo so it all was just a big jumble unfortunately.

8:27 p.m. – Lynnea chose Ella Mai‘s “Boo’d Up” for her performance. I have to say this was such a better choice because it gave Lynnea the chance to sit in the pocket of the chorus and then push herself a little further on the verses. She seemed a little nervous on stage, but her voice didn’t suffer from it and I think she sounded really beautiful.

8:31 p.m. – As soon as we broke for commercial we saw the live Twitter vote happening and Lynnea jumped out to a commanding lead with about 87% of the votes to Ayanna’s 13%. Not a surprise that Lynnea was winning outright, but I didn’t expect it to be a blow out!

8:35 p.m. – After the break Carson broke the news to the Comeback artists that sure enough it was Lynnea entering the Top 13! With that, Lynnea got the choice to join any of the four teams as a coach’s fourth artist. With no hesitation whatsoever Lynnea joined Team Kelly!

8:44 p.m. – Team Jennifer took the stage next for their set of results. There was no time for shoe-throwing tonight before Carson announced the two to advance on votes: MaKenzie Thomas and Kennedy Holmes!

8:46 p.m. – Jennifer’s decision for her save was SandyRedd! I’m so shook that Jennifer decided to save a third female artist and send all three of her male artists home! I thought she would have wanted to diversify after MaKenzie and Kennedy advanced, but I’m thrilled that she’s sticking with SandyRedd!

8:52 p.m. – With their single “Chances,” the Backstreet Boys arrived for a performance that showed that they are still the same boy band they were 20 years ago! And actually a couple of them even look like they did back then. Oh nostalgia!

8:56 p.m. – And last but not least we got the results from Team Kelly. The two to move on based on votes were: Chevel Shepherd and Sarah Grace!

8:58 p.m. – Facing a very tough choice, Kelly also went with an all-female team and saved Kymberli Joye! A necessary choice, but I am so sad to see Zaxai go because he gave one of the night’s before performances on Monday!

9:00 p.m. – So do you think America and the coaches made the right decisions? Of the 13 that made it through, who is your pick to win the season and who will you be rooting for to at least make the finals?

You can now make weekly picks about which artists will be eliminated for “The Voice” in our predictions center. You can also make picks for other reality programs such as “Survivor” and “Dancing with the Stars.” You’ll compete to win a spot on our leaderboard and eternal bragging rights. You can also predict nominations for Oscars, Golden Globes, SAG Awards, Grammys and more. See our contest rules and sound off with other fans in our reality TV forum. Read more Gold Derby entertainment news.