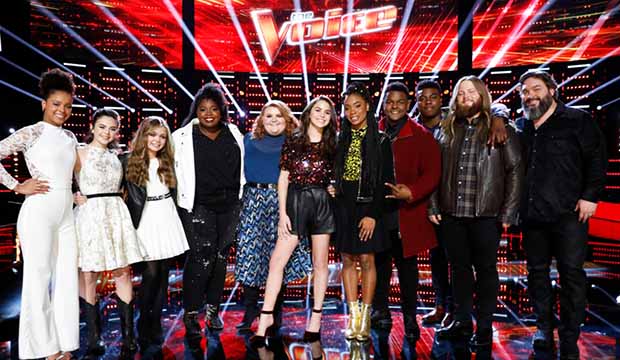 Monday’s episode for “The Voice” offered up the Top 11 remaining artists for Season 15. Who was your favorite of the singers for coaches Kelly Clarkson, Jennifer Hudson, Adam Levine or Blake Shelton? Two of these contestants will be in the bottom two on Tuesday’s episode, fighting for an instant social media save. One contender will be going home tonight, providing us with a Top 10 for next week’s episode. Enjoy our live updating blog item below as we offer you minute-by-minute commentary throughout the on-hour episode.

Here is a full list of all 11 performances from Monday evening’s live show on NBC. “Fan Night” offered viewers the chance to select the songs for each artist:

Dave Fenley from Team Blake performed “Use Me” by Bill Withers.

Kirk Jay from Team Blake performed “Body Like a Back Road” by Sam Hunt.

Sarah Grace from Team Kelly performed “Dog Days are Over” by Florence + The Machine.

DeAndre Nico from Team Adam performed “Cry For You” by Jodeci.

Kennedy Holmes from Team Jennifer performed “Greatest Love of All” by Whitney Houston.

And now make your own comments and constantly refresh the screen for our live updating blog below for Tuesday, November 27:

8:00 p.m. – Tonight’s results from “Fan Night” will determine which artists make the Top 10 and will also feature performances from Team Blake and Team Jennifer, as well as fifth coach Kelsea Ballerini! In addition, Reagan was the “most streamed artist” during the voting window for the second week in a row and so she received the Apple Music Bonus that multiplies her streaming votes by 5x.

8:02 p.m. – In the first set of results, America saved from Team Jennifer Kennedy Holmes and from Team Kelly Kymberli Joye!

8:07 p.m. – With “Dixieland Delight,” Team Blake took the stage for the first time this season. Blake started it off vocally, playing the guitar alongside Chris. Luckily the track was a good fit for all four of the guys, but as expected Blake’s front runner Kirk handled it the best. I’d say that overall Kirk and Blake also match the most as artists and I would loooooove to get a legit duet from them after the season concludes.

8:19 p.m. – Kelsea’s performance of her new single “Miss Me More” was really fun! It’s a great mix of her country voice and hints of pure pop and rock chick vibes. I do think she could up the ante on her performance quality a little bit more, especially for such an energetic song, but she’s still a pretty exciting artist in country music.

8:24 p.m. – The next two artists to enter the Top 10 were Kirk Jay from Team Blake and MaKenzie Thomas from Team Jennifer! Uh oh… that left three artists left on Team Kelly. Are two of them going to be in the bottom together? That would be a shocker!

8:30 p.m. – For their performance, Team Jennifer confidently took on “The Rose.” Literally only Jennifer, MaKenzie and Kennedy could even attempt such a vocal masterclass. It was great to see all three women temper their large voices with something as delicate as the Bette Midler classic and still prove how immaculate their talents are. I’m calling it now–Jennifer is taking both of these girls straight to the finale and may very well earn her first crown on the U.S. series!

8:34 p.m. – From the remaining five artists, the last three to get immediate safety were Team Kelly’s Sarah Grace, Team Blake’s Dave Fenley and Team Kelly’s Chevel Shepherd! That left Lynnea and DeAndre two sing for the Instant Save.

8:42 p.m. – For her live performance, Lynnea Moorer took on “Tattooed Heart” by Ariana Grande. As she did on Monday night, I think Lynnea proved that she has a voice more than capable of keeping par with some of the best youthful voices in music (like Ariana’s) as well as showing a confident and comfortable on stage persona. If she has a vulnerability, I think it might be a lack of charisma and of course having to be the “comeback kid” doesn’t help.

8:45 p.m. – DeAndre Nico sang Tamela Mann‘s “Take Me to the King” for the Save. Not gonna lie, his vocal delivery was pure and utterly flawless. If he was going to give himself the best chance to defeat last week’s Instant Save winner then he definitely did that with this song. It was a passionate and dynamic performance that got both Jennifer and Adam to their feet mid-performance and had the studio audience throwing their hands in the air.

8:50 p.m. – With five minutes of live voting, the results started with DeAndre taking a HUGE lead polling 83% of the votes to Lynnea’s 17%. Honestly, after that performance by DeAndre the votes seem pretty reasonable, but I’m sad for Lynnea who also deserved a spot in the Top 10.

8:59 p.m. – At the close of Instant Save voting, Carson confirmed our suspicion that it was DeAndre with the most votes and was saved from elimination! And so we said goodbye to Lynnea, Team Kelly’s first loss of the season after a successful first run of the show’s Comeback Stage offshoot.

You can now make weekly picks about which artists will be eliminated for “The Voice” in our predictions center. You can also make picks for other reality programs such as “Survivor” and “RuPaul’s Drag Race.” You’ll compete to win a spot on our leaderboard and eternal bragging rights. You can also predict nominations for Oscars, Golden Globes, SAG Awards, Grammys and more. See our contest rules and sound off with other fans in our reality TV forum. Read more Gold Derby entertainment news.