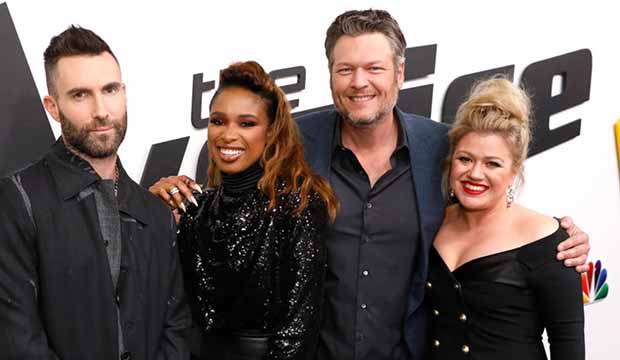 Two artists will be on the chopping block on Tuesday night’s results episode for “The Voice.” You’ll find out the Top 10 singers as the one-hour program airs live on NBC. The bottom three contenders will then face elimination and perform for an instant save on social media with only one advancing forward to next week’s Top 11 episode on Monday, November 26. Who is your favorite and least favorite artist remaining for Season 15 of the long-running reality TV show?

Let’s take a look back at the 13 performances for team members from coaches Adam Levine, Blake Shelton, Jennifer Hudson and Kelly Clarkson from the “Dedications” episode on Monday, November 19:

Tyke James (Team Adam) performing “Everything I Do”

DeAndre Nico (Team Adam) performing “I Can Only Imagine”

And now keep refreshing this page as we provide you with a full live updating blog for the Tuesday, November 20 results episode:

8:00 p.m. — With the addition of Lynnea to Team Kelly from the Comeback Stage, we must say goodbye to two artists tonight. Kirk was the only artist to have his performance enter the top 10 on iTunes overnight so with the multiplier on all votes cast in his favor he should be safe tonight. Carson also informed us, much to her surprise, that Reagan was the most streamed artist on Apple Music overnight. Does that mean everyone else is vulnerable? Let’s find out!

8:01 p.m. — It’s a packed show tonight so Carson is starting off with some results right at the top of the hour. The first three artists safe tonight are: Team Adam’s Reagan Strange, Team Blake’s Kirk Jay, and Team Jennifer’s Kennedy Holmes!

8:09 p.m. — In the second set of results, safety was announced for: Team Kelly’s Chevel Shepherd, and Team Blake’s Chris Kroeze!

8:16 p.m. — For the first time this season, Adam took the stage with his team for a performance of the Fleetwood Mac classic “Rhiannon.” Once again Reagan sounded like a gem and DeAndre made his lines his own, but sadly Tyke’s voice was not a match for the song so he stuck out like a sore thumb. Overall the performance was awkward and kind of a dud, but now I realize how badly I would love to hear Reagan take on a Stevie Nicks song on her own at some point in the competition!

8:30 p.m. — Before the last set of results, Team Kelly gathered to perform Whitney Houston‘s “I Will Always Love You.” The five women passed off lines one by one and each of them held their own with the classic. If I had to pick a stand out I’d give it to Sarah Grace who had the most unique spin on the song and sounded lovely. Overall, a gorgeous performance! But we’re not surprised by that, are we?!

8:33 p.m. — And the final two artists saved by America this week are: Team Blake’s Dave Fenley and Team Kelly’s Sarah Grace! That leaves, SandyRedd, Lynnea and Tyke as the bottom three to sing for the Instant Save. Two of them will be eliminated in less than 30 minutes.

8:41 p.m. — First to perform for the Save was SandyRedd with “Believer.” Like last night, SandyRedd’s song choice didn’t suit her voice and the verses didn’t provide enough of an impact. She is clearly a passionate performer and can belt a big chorus, but without the foundation of a well-sung verse she just comes off as uneven. I think that’s why she’s had a tough time connecting with the audience.

8:45 p.m. — From Team Adam, Tyke James performed “Home.” Dropping the Hawaiian vibe that he and Adam chose for his performance last night, Tyke finally delivered a song in his full voice that, at least for me, for the first time showed how pure he can sound. I think he and Adam are getting a little caught up in making him sound unique as opposed to focusing on what suits him. This was a huge step up for him. Will it save him?!

8:48 p.m. — And last, Lynnea Moorer sang “If I Ain’t Got You.” I think this was a great song choice for her because it’s a well-known hit song that immediately draws in the audience which is what she, an artist trying to mount a comeback, needs to do in an Instant Save situation. When she reached the chorus and erupted into her big voice she may have sealed it as the winner of the save. Let’s see if I’m right!

8:52 p.m. — During the commercial break we got a glimpse of the live results and it was Lynnea that jumped out to an early lead in the 5-minute window. At the start of voting she had a 49% count while SandyRedd and Tyke hovered around 21% and 30%, respectively. As the window began to close, Tyke’s number spiked to 39%, but he was stealing votes from SandyRedd who dropped down to 11% while Lynnea remained at 50%. Is there enough time for Tyke to pull ahead?

8:59 p.m. — The artist saved by live Twitter vote was Lynnea Moorer! I’m crying. She did it, kids! So happy that she was able to overcome the hurdle of being the comeback performer! Can’t say I’m surprised to see Tyke and SandyRedd go after subpar performances Monday night. It’s a tough group this season–who goes next week is going to be really hard to predict! Sound off in the comments about tonight’s results and who you think is the best of the Top 11!

You can now make weekly picks about which artists will be eliminated for “The Voice” in our predictions center. You can also make picks for other reality programs such as “Survivor” and “Dancing with the Stars.” You’ll compete to win a spot on our leaderboard and eternal bragging rights. You can also predict nominations for Oscars, Golden Globes, SAG Awards, Grammys and more. See our contest rules and sound off with other fans in our reality TV forum. Read more Gold Derby entertainment news.