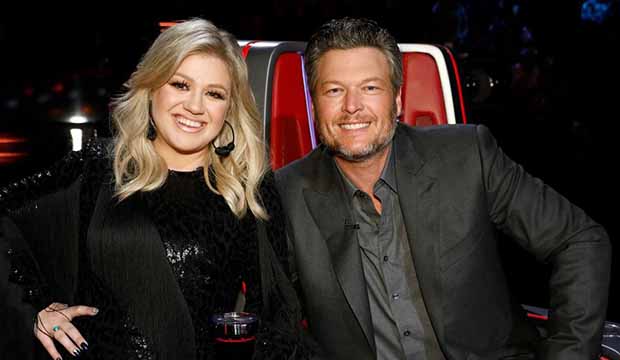 What did you think of Monday’s whirlwind “The Voice” episode featuring 24 performances packed into two hours on NBC? It was the first live show of Season 14, and there were no actual eliminations from the program. In fact, Kyla Jade for Team Blake Shelton, Britton Buchanan for Team Alicia Keys, Brynn Cartelli for Team Kelly Clarkson and Sharane Calister for Team Adam Levine are guaranteed for the Top 12 episode next Monday, April 23, after getting the most votes in this round.

That means 20 artists are slated to perform yet again for the live playoffs on Tuesday and Wednesday. Eight of them will be gone after major eliminations will happen based on audience votes at home. Enjoy our live updating blog below for the Tuesday, April 17, episode hosted by Carson Daly.

Contributors John Benutty and Denton Davidson joined Gold Derby managing editor Chris Beachum recently to discuss all four teams, predicting which singers will advance to the Top 12 on April 23 and which ones will be eliminated on the three episodes this week. Watch our slugfests about Team Kelly, Team Adam, Team Alicia and Team Blake.

Live updating recap and analysis below for Tuesday, April 17:

8:00 p.m. – Four artists won their way into the Top 12 during yesterday’s episode of “The Voice” and tonight ten singers will compete from Team Alicia and Team Blake in hopes of joining them. On Wednesday, April 18, Team Adam and Team Kelly will have their chance to advance. All of the results from both nights will be revealed Wednesday. If tonight is anything like last, it should be a nail biter! Let’s get started.

8:05 p.m. – With “Smoke Break,” Spensha Baker is the first to sing from Team Blake. As the only country singer on Team Blake, it’s hard to imagine Spensha won’t be saved if she can’t pull in enough votes. She’s changed things up tonight with a fun mid-tempo as opposed to the ballads we are used to hearing from her. She sounds great, looks stunning and appears to have loosened up on stage. This was probably my favorite performance from her. The coaches gave her a standing ovation.  Kelly applauded Spensha’s ability to tackle a Carrie Underwood song and Blake basically admitted she’s his favorite artist on Team Blake.

8:10 p.m. – Wilkes is up next taking on the No Doubt classic “Don’t Speak.” He has slowed the song down into more of a haunting rock ballad and I love the arrangement. Off the top, Wilkes sounds fantastic but midway through the song it got a bit too theatrical for me. This performance was created with great intent, but it didn’t win me over. Regardless, the coaches were all on their feet by the end. Alicia said Wilkes is something special and his range is ridiculous. Adam cheered Wilkes’ improvisation skills while Blake was quick to mention the artists chose their own songs. Gwen Stefani had no influence on this performance outside of writing the song.

8:20 p.m. – Pryor Baird is going with a surprising song selection, Dolly Parton’s “9 to 5.” I LOVE his soulful rendition of this song. His raspy voice is distinctly the opposite of Dolly’s so he is able to stay true to the melody and still make it sound completely his own. Personally, I thought that was an incredible song choice and once again the coaches are on their feet. Adam said it’s a foregone conclusion that Pryor belongs on the stage for the duration of this season. Blake agreed that Pryor deserves to stay, and seemed to hint at possibly saving Pryor if it comes down to that.

8:23 p.m. – Next up, Austin Giorgio has changed things up by taking on a contemporary song for the first time. With Justin Bieber’s “Love Yourself,” Austin shows restraint by staying seated on a stool until midway through the song. I love the idea of him putting his spin on contemporary music, but I don’t think this is going as well as he’d hoped. He seems to struggle when attempting little runs and the lyrics were oddly difficult to understand. That being said, the charisma of this kid is off the charts. I’d also add his wardrobe is sick! Although I would love to see him continue, it seems unlikely after this performance.

8:30 p.m. – The final member of Team Blake to perform is Gary Edwards. There are so many incredible soul singers this season, it seems like Gary has gotten lost in the shuffle but the man has pipes. Tonight he’s singing “America the Beautiful” and I can tell you right now this could absolutely launch him to the top of Team Blake. Nothing strikes a cord on this show quite like these patriotic hymns. Gary is giving a full-on preacher’s performance as he takes this song to church. It was a formidable rendition, but it wasn’t the total home run it could have been. I still give Spensha and Pryor the edge tonight. Wise song choice from Gary though.

8:37 p.m. – The first artist up for Team Alicia is Gold Derby’s current odds-on favorite to win, Terrence Cunningham. Terrence gave a stellar performance last night but I think it was a mistake to sing the entire song in falsetto voice. As impressive as he is in that range, it’s a polarizing form of singing to audiences at home. Tonight I hope to hear him show off more of his belting range or even the gorgeous chest voice he displayed in the blinds. Singing Chaka Khan’s “Ain’t Nobody,” he’s already off to a great start. He’s turned this R&B jam into an intimate ballad as if he’s performing in a piano bar. This is reminiscent to his “My Girl,” which is a great thing. But wait! Midway through he switched it up to Chaka’s version and started jamming. Unfortunately, it sounds a bit disjointed and I didn’t really care for it. The coaches are on their feet, but I’m frustrated with this performance because I don’t think he is showing his full potential. I just don’t see this performance translating into votes, but Alicia will never let him go so either way he should be safe.

8:43 p.m. – Christiana Danielle is next with “Take Me to Church” by Hozier. I love that she makes interesting song choices but this rock vibe just isn’t working. She set the bar last night with her iconic performance of “Hey Ya!” but was not able to reach that level with this song. Still, the woman is stunning and Kelly and Alicia were both cheering on their feet. Perhaps it sounded better in the live studio. Kelly threw her own team under the bus and said Christiana is the greatest person on this show and begged Alicia to plea for her safety. This hype from Kelly and Alicia may just be enough to convince viewers to deliver the votes!

8:50 p.m. – Up next is Jackie Foster, Team Alicia’s pop-rock vocalist singing the anthem “Alone” by Heart. Her voice is soaring over the chorus and her range is incredible. Tomorrow night is going to be a blood bath! How are three of these incredible artists on Team Alicia going home? Jackie put the pedal to the metal with this performance and the coaches look gobsmacked. She’s probably getting voted through for that! Alicia is going to have to make some sort of gut-wrenching decision tomorrow and we will lose three incredible talents regardless of what happens.

8:55 p.m. – Kelsea Johnson is next singing a reggae-tinged version of “I Need You Bad” by Jazmine Sullivan. I love her sass and the grit she’s put on display with this song. YES! Alicia’s team is absolutely on fire. I don’t think this song is popular enough to bring in the votes she needs, but she absolutely deserves to move on. She’s so much fun to watch on stage.

8:59 p.m. – Johnny Bliss is the final performer of the night and like everyone else on Team Alicia, this guy is no joke. He’s singing the ballad “One and Only” by Adele. Johnny has a voice that can soar, so the way he is shouting through this song isn’t doing him justice. It sounds like he may be having some vocal issues. Alicia sang his praises, but I’d be a bit surprised if he moves on.

9:00 p.m. – Final thoughts: Team Alicia is stacked! If I had to predict now, I’d say Jackie has the edge to advance on the public’s vote. Not only did she deliver an insane vocal, she is also in her own lane as the pop-rocker on a team of soul singers. But it’s just crazy that if Jackie advances, Alicia is going to have to choose between Terrence, Christiana and Kelsea! Over on Team Blake it seems like an easier choice to make. Spensha and Pryor deserve to move forward.