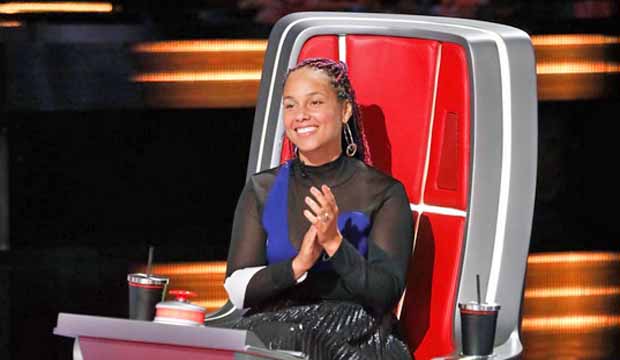 Chris Blue was chosen as the very last artist by Alicia Keys on the final blind audition for Season 12 in early 2017. Will one of these few remaining singers who will perform on Tuesday’s Night 6 one-hour episode make a big push towards the Season 14 championship in a few weeks?

Alicia is back this season after taking a break in the autumn. She won her first and only coaching championship last spring and is already assembling an excellent team this time around. Kelly Clarkson is this season’s rookie coach and was a special advisor on Season 13 last fall. She has joined by the only two coaches to remain for all 14 seasons — six-time coaching winner Blake Shelton and three-time top coach Adam Levine. Carson Daly has returned as the program’s host and one of its Emmy-winning producers for NBC.

Enjoy our live updating blog below for this show tonight and make your own comments about the performers and coaching decisions.

Before watching the newest blind auditions, take a look back at our blog items analyzing every performance from February 26, February 27, March 5, March 6 and March 12.

Over the following weeks, battle round episodes will follow the blinds starting March 19. Advisors will be Julia Michaels (Team Adam), Trace Adkins (Team Blake), Shawn Mendes (Team Alicia) and Hailee Steinfeld (Team Kelly). The knockout round will follow the battles and then the live episodes where you can vote for your favorites. Once the live playoffs start you will also be able to make picks each week in our predictions center. While that is not yet open for “The Voice,” you can already make predictions for such reality TV shows as “Survivor,” “Project Runway,” Emmy Awards nominations and more.

Live blog below for Tuesday, March 13:

8:00 p.m. – Adam has two spots open to complete his team while Alicia, Kelly and Blake each have one spot remaining! Who will take the final spots on these superstar’s teams? Time to find out!

8:10 p.m. – Up first is Genesis Diaz, a young pop singer who comes from a musical family. She’s auditioning with “Praying” by Kesha, a powerful song that requires passion and range. Genesis is knocking it out of the park and seems to have the entire package it takes to be a star, but the coaches aren’t budging! Finally, at the last moment, both Adam and Blake turn around. Blake said he would love for her to be the person to complete Team Blake. Adam praised her technique and called her “amazing.” After careful consideration, Genesis chose Adam. Each coach only has one spot remaining!

8:20 p.m. – The next artist is Sharane Calister, a gospel singer from Iowa who hopes to snag up the final spot on someone’s team. She’s singing “Make it Rain” by Ed Sheeran and shows off a stirring, soulful voice from the first note. Once she reaches the chorus, Sharane let’s the vocals really fly and Alicia slammed down her button while simultaneously egging Kelly on to do the same. Alicia must be feeling confident this season if she’s trying to help Kelly out. Kelly said she is weary from losing to Alicia time and time again and feels broken, but Sharane is apparently a fan! But alas, Alicia was just playing with Kelly like a cat toying around with a mouse. Sharane chose to complete Team Alicia.

8:30 p.m. – Dallas Caroline is next, an aspiring country singer who is just 17 years old. She is singing “Always On My Mind” by WIllie Nelson in honor of her home town that was struck by the tragic wildfires. This song is so brilliant, it’s difficult to sound bad, but Dallas has a beautiful innocence to her voice. It’s not polished and she has room to grow, but there is definite potential. Kelly was the first to turn her chair, followed by Adam and finally Blake. After the three banter, Dallas surprises nobody and completes Team Blake. Perhaps now Kelly or Adam can get a country singer.

8:40 p.m. – Allen Pride Bowser is an energetic keyboard player who started singing at his grandmother’s church. She currently has stage four cancer, so Allen is singing to make her proud. He is performing “What You Won’t Do For Love,” and I already love this guy. He clearly loves music and has a style so unique the coaches look confused and impressed at the same time. But will anyone turn around? No! That’s sad. Kelly wanted to hear his upper register and said he didn’t show enough range. Unfortunately Allen was sent home.

8:50 p.m. – Up next is Jackie Verna, a country-pop artist who seems destined to fill out Team Kelly. She recently recovered from a serious car accident that left her with short-term memory loss. She’s now confident enough to give music another try and hopes to make her dream come true on “The Voice.” She is singing “Peter Pan” and has a delicate, angelic voice that would be a dream for country radio. Adam almost instantly turned around while Kelly let it marinate and surprisingly refused to turn around! Adam screamed “Oh My God!” and could not believe his luck. Team Adam is full! But Kelly has one spot remaining. Can she find a winner like Alicia did two seasons ago?

8:59 p.m. – 35-year old Amber Sauer grew up inspired by Aretha Franklin, Chaka Khan and Whitney Houston. She’s sung background vocals for the likes of Natalie Cole, Angie Stone and Kelly Price. She’s singing “Shape of You” of Ed Sheeran. This is a tough song to audition with because the first verse is so fast-paced. Once she reached the chorus, she showed off the power and grit Kelly had been waiting for. Team Kelly is complete! And that’s a wrap for Season 14 blind auditions.