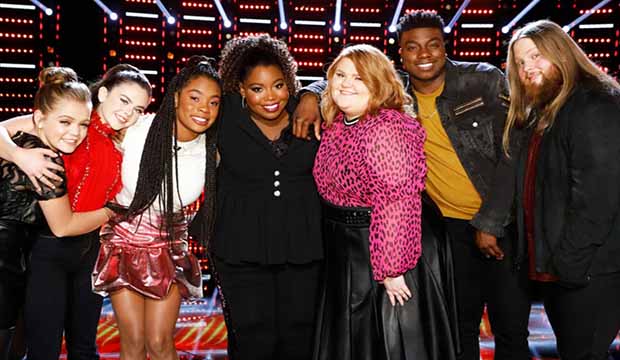 After Tuesday night’s live elimination of Dave Fenley and DeAndre Nico, the Top 8 artists are set to compete in the Season 15 Semifinals of “The Voice.” Each of the coaches has taken at least one hit this season, but Team Kelly Clarkson is still holding strong with three artists. Both Team Blake Shelton and Team Jennifer Hudson have two artists remaining while Team Adam Levine is down to just one.

Next Monday, December 10, “The Voice” Top 8 will once again perform for audience votes. On Tuesday, the field will be cut in half after three artists are automatically declared safe based on votes and downloads while one more will win the Instant Save by singing another song for a chance at being saved by live Twitter vote.

Below we rank the eight artists based on our impressions of their performances so far this season as well as the likelihood that they’ll be one of only four to make it to the season finale. Each coach’s team is led by a clear front-runner, but all four coaches rarely send an artist each to the finale. So how will this season shake down now that we’re in the final stretch of the competition?

See our ranking below, then let us know in the comments if you think we’re calling this race correctly!

1. Kirk Jay – Team Blake
(Blinds: “Bless the Broken Road”; Battle: “Let It Rain”; Knockout: “In Case You Didn’t Know”; Playoffs: “One More Day”; Top 13: “I’m Already There”; Top 11: “Body Like a Back Road”; Top 10: “Tomorrow”)
Kirk has been the most consistent performer to date and continues to make wise song choices. He’s the only artist to have two of his singles reach the top 10 on iTunes and he has yet to give a bad performance. If there is any artist this season feels like a revelation, it has to be this country singer from Alabama. Each time Kirk sings he draws the emotion out of viewers and that is exactly what it takes to win it all. It doesn’t hurt that he has the most successful coach in “The Voice” history backing him 100%. While every other artist has hit a bump in the road, Kirk has appeared to be on smooth pavement headed straight for the finale.

2. Kennedy Holmes – Team Jennifer
(Blinds: “Turning Tables”; Battle: “Battlefield”; Knockout: “What About Us”; Playoffs: “Halo”; Top 13: “Wind Beneath My Wings”; Top 11: “Greatest Love of All”; Top 10: “Me Too”)
This 13-year old continues to blow my mind each time she steps on the stage. The poise Kennedy has at her age is simply out of this world. While she’s been impressive throughout the series, it was her performance of “Me Too” that really took her to a different level in the competition. I can’t imagine any other artist this season performing a full dance routine while singing. Kennedy nailed it while making it look completely natural. If anyone has major pop star potential it is Kennedy and I can’t imagine the finale without her.

3. MaKenzie Thomas – Team Jennifer
(Blinds: “Big White Room”; Battle: “Always Be My Baby”; Knockout: “How Deep Is Your Love”; Playoffs: “I Believe in You and Me”; Top 13: “I Am Changing”; Top 11: “Emotions”; Top 10:”Because of You”)
MaKenzie is simply fearless in the way she continuously takes on these huge diva ballads yet somehow manages not to sound like a professional karaoke singer. Her likability factor is through the roof, I just wish she would milk that a little bit more. Her confidence seems to wain, which I believe stops her from really being “in the moment” when she sings. But vocally she slays me every time. That being said, this is a close race to the finale and there are at least three artists I’m ranking below her that could take her down if she misses the mark next week.

4. Chevel Shepherd – Team Kelly
(Blinds: “If I Die Young”; Battle: “You Look So Good in Love”; Knockout: “Travelin’ Solider”; Playoffs: “Grandpa (Tell Me ‘Bout the Good Ol’ Days)”; Top 13: “Little White Church”; Top 11: “Space Cowboy”; Top 10: “You’re Lookin’ at Country”)
No artist has grown on me more this season than Chevel. I just adore the spunky attitude of this “Country Tinkerbell” and I believe she has a shot at becoming a real force in the music industry when this is over. Her unapologetic love of old-school music is refreshing and the youthfulness of her voice makes it all sound current. While Kirk represents the future of country music, Chevel beautifully pulls from the past. This teenager is a dark horse and I’m banking on her reaching the finale.

5. Reagan Strange – Team Adam
(Blinds: “Meant to Be”; Battle: “Photograph”; Knockout: “Dancing on My Own”; Playoffs: “Worth It”; Top 13: “You Say”; Top 11: “Complicated”; Top 10: “Cry”)
Reagan has had an absolute roller-coaster of a season. Twice we’ve ranked her at the top of our power rankings and for good reason. She was the top streaming artist on Apple Music for two weeks in a row, earning her the 5x vote multiplier both times. But her latest performance of “Cry” was a huge misfire that landed Reagan in the bottom three where she was too sick to sing for the Instant Save. The reason I still rank her this high is because she was able to win that Instant Save without even performing. If she can pull herself together and nail one more vocal performance she can still make the finale.

6. Chris Kroeze – Team Blake
(Blinds: “Pride and Joy”; Battle: “Back in the High Life Again”; Knockout: “Burning House”; Playoffs: “Have You Ever Seen the Rain?”; Top 13: “Let It Be”; Top 11: “Long Train Runnin’”; Top 10: “Callin’ Baton Rouge”)
Chris is the most difficult artist to gauge when it comes to where he actually stands in this competition. He has that Southern rock/country vibe that is always popular, but he’s also sort of forgettable. Chris is a consistent vocalist who lacks stage presence and star power. I thought his performance of “Callin’ Baton Rouge” was just okay, yet it was the most streamed song of the week, earning him a 5x multiplier. Do I envision him in the finale? No. Could he be in it anyways? Definitely.

7. Sarah Grace – Team Kelly
(Blinds: “Ball and Chain”; Battle: “No Roots”; Knockout: “I’d Rather Go Blind”; Playoffs: “When Something Is Wrong with My Baby”; Top 13: “Goodbye Yellow Brick Road”; Top 11: “Dog Days Are Over”; Top 10: “Amazing Grace”)
Despite Sarah being perhaps the most musically gifted of the young, teenage prodigies, she also has the least charisma. Her rendition of “Amazing Grace” was the highest charting song of Season 15 so far, so there is a real chance I’m underestimating her, but I just don’t envision her as a finalist. Although she’s got incredible musicality, her vocals have been inconsistent and she doesn’t seem to resonate with audiences as much as others in the competition. I’m afraid it’s probably the end of the road for Sarah.

8. Kymberli Joye – Team Kelly
(Blinds: “Run to You”; Battle: “Mercy”; Knockout: “The Middle”; Playoffs: “Radioactive”; Top 13: “Diamonds”; Top 11: “Break Every Chain”; Top 10: “Oceans (Where Feet May Fail)”)
There is no question that Kymberli is the most powerful vocalist remaining in this competition. The woman can move mountains with that voice and she can’t sing a bad note if she tries. I’m just not sure a gospel singer can win “The Voice.” It seems far-fetched for her to make the finale at this point, despite her ability to sing most of the competition under the table. That’s just the sad truth. Ironically, it takes more than a great voice to win “The Voice.”

You can now make weekly picks about which artists will be eliminated for “The Voice” in our predictions center. You can also make picks for the final episodes of “Survivor.” You’ll compete to win a spot on our leaderboard and eternal bragging rights. You can also predict nominations for Oscars, Golden Globes, SAG Awards, Grammys and more. See our contest rules and sound off with other fans in our reality TV forum. Read more Gold Derby entertainment news.