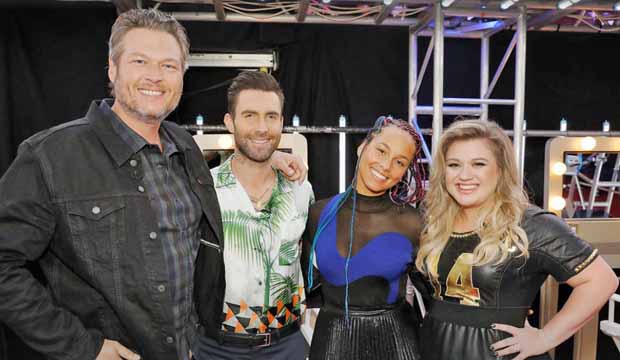 Are you enjoying Kelly Clarkson as the newest coach on Season 14 of “The Voice” on NBC? If you read some of the comments from Monday’s blog item, you’ll find that some have already been loving her and others think she talks way too much. Enjoy our live updating blog below as we recap Night 2 of blind auditions. Kelly faces off against defending champion Blake Shelton (a six-time winner), three-time coaching champ Adam Levine, and returning coach Alicia Keys, who skipped last season but won last spring for Season 12.

Blind auditions kicked off on on Monday, so Tuesday’s one-hour episode will be the second of the new season. Our live blog below reviews every single performance as they happen. A new feature for blind auditions is the “block” and was already used in the first installment twice to great effect.

SEE ‘The Voice’: Is Kelly Clarkson a hit or miss as the new coach on Season 14? [POLL]

Over the following weeks, battle round episodes will follow the blinds. Advisors will be Julia Michaels (Team Adam), Trace Adkins (Team Blake), Shawn Mendes (Team Alicia) and Hailee Steinfeld (Team Kelly). The knockout round will follow the battles and then the live episodes where you can vote for your favorites. Once the live playoffs start you will also be able to make picks each week in our predictions center. While that is not yet open for “The Voice,” you can already make predictions for such reality TV shows as “Survivor,” plus Independent Spirit Awards, Oscars, Razzies and more.

Live blog below for Tuesday, February 27:

8:00 p.m. – The Block changed the game last night–will we see another used tonight or will Adam and Kelly save them for later in the blinds when they’ll have a better impact? It’s Night 2 of Season 14 and I’m thrilled to be here live blogging again. Let’s go!

8:02 p.m. – The first audition of the night is 23-year old Davison from Little Rock, AR. He’s a worship leader in his church and a stylist and describes his music taste as gospel, soul and R&B, all of which came out in his performance of “To Love Somebody.” Both Adam and Blake turned their chairs quickly while Kelly and Alicia passed on the chance to add him to their teams. Alicia seemed bummed that she didn’t turn around, telling Davison that his voice has a storytelling quality that draws the audience in. Facing a decision between Adam or Blake, Davison chose to join Team Adam based on the way he seemed to understand the type of artist that Davison saw himself as.

8:13 p.m. – Next up is Jaclyn Lovey, a 16-year old from Placerville, CA inspired by classic singers like Johnny Cash and Billie Holiday. She took on the Elvis hit “Can’t Help Falling in Love” and had Kelly saying “That’s pretty” immediately. First to hit their button was Blake, followed closely by Alicia, but Kelly and Adam left their backs to the stage. The coaches complimented Jaclyn’s ability to keep it simple and Blake and Kelly emphasized how unique her voice is. Alicia appealed to Jaclyn by vowing to let her take the driver’s seat in song choice and perhaps that’s why she chose to join her team! Another artist lost to Team Blake.

8:24 p.m. – 17-year old Sophia Dion from Park City, UT took on “Whatta Man” with a country twist, but failed to get a turn from any of the coaches. Kelly and Alicia liked that they didn’t recognize the song at first, but Blake said that her pronunciation could have been cleaned up a little bit. Following Sophia, Brittney Spencer‘s “Road Less Traveled,” Karianne Jean‘s “Blue Ain’t Your Color” and Wildee Fusaro‘s “Legends” all came up short as well.

8:31 p.m. – Molly Stevens, 34-year old country/americana singer from Raleigh, NC, is looking for her break in the industry after grinding throughout the South including Nashville. Taking the stage with her guitar, Molly performed “Heavenly Day” and after just a few notes earned a turn from Blake and then Kelly, setting up a battle of two coaches hungry for a country artist. Kelly fought really hard for Molly, stressing how successful she’s been in country music, prompting Blake to take digs at Kelly’s genre-switching career. After a huge pitch from Kelly, Molly went with her!

8:43 p.m. – Moving right along, the next artist to audition is Dylan Hartigan who made his start on in a teenage boy band. Since then he’s scaled back and shifted genres to sing more lyric- and story-based folk rock songs. For his performance he impressed Kelly, the only coach to hit her button, with “Danny’s Song.” I think Kelly will be a great match for him, pushing him to broaden his voice and make a bigger impact with future performances.

8:51 p.m. – The last artist of the night is 35-year old Pryor Baird from Nashville, TN. He’s a blues singer that has dedicated his life to the genre despite never being able to make a living with it. For his audition he wowed the panel with “I Don’t Need No Doctor,” getting an early turn from Adam, back-to-back turns from Blake and Alicia and a rare fourth turn from Kelly. Kelly called his soulfulness innate, Adam complimented his singular skills on the guitar, Blake appealed to the country roots in Pryor’s voice, and Alicia highlighted his power and range and stressed that she can help him explore new spaces with his music. In the end, this highly contested artist joined Team Blake, his first and only artist of the night!

8:59 p.m. – Pryor’s decision to join Team Blake felt like a blow to the other coaches, but energized Blake after a night of tough losses. We’ll be back next week with Nights 3 and 4 of the blind auditions.