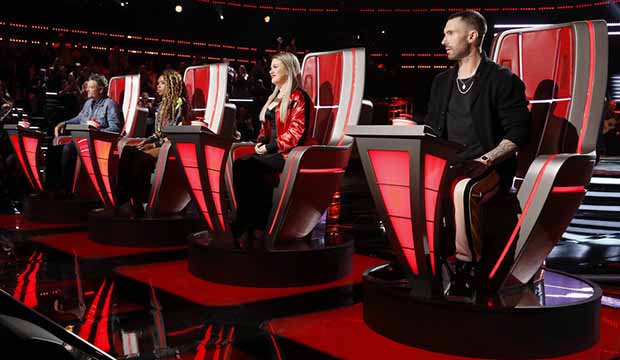 “The Voice” live playoffs kick off on Monday, November 12 with individual performances by the 24 artists from the teams coached by Kelly Clarkson, Jennifer Hudson, Adam Levine and Blake Shelton.  Voting will kick off at the end of the evening and continue overnight. On Tuesday’s results show, the two artists with the most votes from each team will be revealed and advance to the Top 13.

Each coach will then select one of their remaining four artists to move on in the competition. The lucky 13th finalist will be chosen from the final two Comeback Artists — Ayanna Joni and Lynnea Moorer — who will perform live for the Instant Save. The winning artist will get to choose which team they would like to join.

The Top 13 will perform live on November 19 on the first of the themed shows, “Story of the Song.” Each artists will reveal “what their song means to them: special memories, significant life moments and covering artists who have inspired them.”

The Top 11 will be featured on the November 26 show, which will be “Fan Pick.” Songs will be selected by viewers via the official app.

The Top 10 take to the stage on the December 3 show for “Challenge Week.” Each gets a chance to tackle a song that represents “a challenge on their journey to become a well-rounded artist.”

The December 10 show will include solo performances by each of the Top 8 as well as duets between the four pairs of contestants.

And the two-part finale on December 17 and 28 will be a showdown of the Top 4.

“The Voice,” which has won three Emmys as Best Reality-Competition Show, is hosted by Carson Daly. Levine and Shelton have been with the show from the start. Shelton has coached six of the 13 winners of “The Voice,” including season 13 champ Chloe Kohanski. Levine has bragging rights for three champions while Clarkson won in her debut season last spring with Brynn Cartelli.