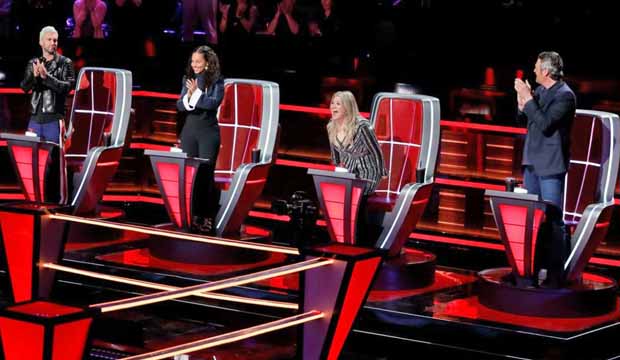 Which artist will win “The Voice” Season 14? That’s the question on everybody’s mind as we head into next week’s live playoffs. The show is currently down to the Top 24 artists, with each coach — Blake Shelton, Kelly Clarkson, Alicia Keys and Adam Levine — having narrowed down their teams to six apiece. A whopping 12 singers will be eliminated next week (three from each team), and now YOU can predict who’ll be headed home and who will eventually win. Head over to Gold Derby’s predictions center right now to make your first picks. The reader with the best score each week will win a $100 Amazon eGift Card.

Clarkson is the newest member of “The Voice” judging panel, though she’s no stranger to reality TV. After winning the first season of “American Idol” in 2002 Clarkson went on to take home three Grammys. Clarkson’s “The Voice” team includes Alexa Cappelli, Brynn Cartelli, Dylan Hartigan, Tish Haynes Keys, D.R. King and Kaleb Lee. Clarkson acquired Keys and Lee in the playoffs, while Hartigan flip-flopped between Team Kelly and Team Blake before Clarkson eventually stole him back in the knockouts.

Keys is currently starring on her second season of “The Voice” after mentoring Chris Blue to a victory in Season 12. She’s hoping to win consecutive championships with her team of Johnny Bliss, Britton Buchanan, Terrence Cunningham, Christiana Danielle, Jackie Foster and Kelsea Johnson. Foster is the only artist who who didn’t start out on Team Alicia, with Keys stealing her last week from Team Adam (who initially stole her from Team Kelly).

Levine has been on the show since day one, but he’s only managed to secure three victories so far: Javier Colon (Season 1), Tessanne Chin (Season 5) and Jordan Smith (Season 9). Will someone from this year’s team help him get closer to tying Shelton’s record? Levine’s current six artists are Mia Boostrom, Sharane Calister, Drew Cole, Rayshun LaMarr, Reid Umstattd and Jackie Verna. From this group, five started out with Team Adam while Calister was recently stolen from Team Alicia.