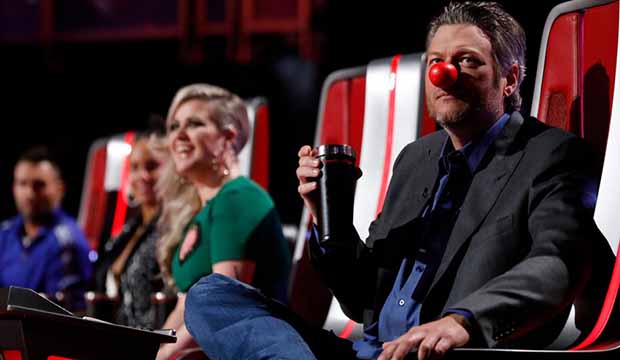 As “The Voice” heads towards the finish line for Season 14, two artists will be eliminated on Tuesday night’s episode. The Top 10 will become a Top 8 for next week’s show, so which ones do you think are most in danger of going home early? Make your comments in our live updating blog item below as we provide you with play-by-play analysis for the Tuesday, May 8, program.

SEE ‘The Voice’ Top 10 Instant Save: Was right artist rescued by viewers of season 14? [POLL]

Team Kelly Clarkson is down to just two contenders remaining, and so is Team Adam Levine. The teams for Alicia Keys and Blake Shelton still have all three of their artists competing.

Read our complete commentaries of the episodes for Monday, April 23, Tuesday, April 24 , Monday, April 30, Tuesday, May 1 and Monday, May 7. Here are all members of the Top 10 and the tunes they performed on Monday evening.

Live updating recap of the results episode plus analysis below for Tuesday, May 8:

8:00 p.m. – The results are in and the semi-finalists will be revealed tonight! 5 Seconds of Summer will perform their new song “Young Blood” later, but opening the show is Charlie Puth with his new single “Done For Me.” It’s a fun, sexy, mid-tempo jam that sounds like a hit to me.

8:05 p.m. – Kyla (Team Blake) led all contestants on the iTunes singles chart when voting closed on Tuesday, May 8. Britton (Team Alicia), Brynn (Team Kelly) and Pryor (Team Blake) all joined her in the top 10 which earned them all “bonus points” when the votes were tallied. Those four will likely sail into the Top 8 next week. On the other end of the spectrum, Rayshun (Team Adam) had the lowest charting song and just ahead of him were Jackie V. (Team Adam) and Jackie F. (Team Alicia). Will they be the bottom three competing for tonight’s instant save? Let’s find out!

8:09 p.m. – Carson Daly rallied the Top 10 to the stage and announced that Brynn was the most streamed artist on Apple Music last night. I believe this is the second week in a row she’s earned that accolade. It’s time to find out the first two artists moving on to the semi-finals. They are: Kyla (Team Blake) and Britton (Team Alicia). No surprises there!

8:18 p.m. – The eight artists still waiting for results have returned to the stage to hear their fate. Carson engaged in his usual chitchat before announcing two more semi-finalists: Brynn (Team Kelly) and Jackie F. (Team Alicia). Jackie looked shocked, likely due to her poor performance on iTunes last night. That serves as proof that you can’t depend on iTunes charts when making your predictions!

8:27 p.m. – Half of the Top 8 has been announced and now it is time to learn the names of two more artists moving on to next week’s semi-final. They are: Pryor (Team Blake) and Kaleb (Team Kelly). Only one more will be called to safety before it is time for the instant save. Still in danger are: Spensha (Team Blake), Christiana (Team Alicia), Jackie V. (Team Adam) and Rayshun (Team Adam).

8:40 p.m. – 5 Seconds of Summer is on stage performing their new single “Young Blood.” The pop/rock group is a welcomed sight as they break the tension in the room for at least a short moment. Then four nervous contestants walked back out to learn which of them is safe and which three will have to fight it out for the instant save. Advancing to the Top 8 is: Spensha (Team Blake)! Christiana (Team Alicia), Jackie V. (Team Adam) and Rayshun (Team Adam) will perform for the instant save. I have to give the early edge to Jackie. Not only have both Christiana and Rayshun both been in the bottom before, but Jackie is the lone country singer facing off with two soul singers. But anything can happen!

8:45 p.m. – Up first to prove she deserves a place in the Top 8 is Christiana with “Unchain My Heart.” She’s shows off that delicious lower register of hers before breaking into the upbeat number. I don’t recognize this song, but it’s a fun, soulful number. Will Twitter users respond? I hope so. I don’t want to see Christiana go this week, she’s a goddess. She nailed the song vocally and I’m not sure there is more she could have done. Bravo!

8:48 p.m. – Next up is Jackie singing “I Told You So.” Now THIS is a song you choose when you’re fighting to stay in the competition. I’ve only grown to like Jackie more each week. Her voice is beautiful, classic country. She hit a few bum notes but overall the song choice was brilliant and the fact that she burst into tears at the end should earn her a few sympathy votes.

8:52 p.m. – Last to perform is Rayshun with the classic “Let’s Get It On.” This is one of those songs that can easily veer into “karaoke” sounding so I’m not sure it’s the song I would have chosen. Nobody this season has more energy on stage than Rayshun and he’s continuing to torch his way through the season with this performance. Vocally, Rayshun shredded the song and definitely garnered the biggest reaction from the studio audience. But did he win over viewers at home? This could be a close call!

8:57 p.m. – Throughout the commercial break we can see that Rayshun is leading the way with around 45% of the votes. Jackie is next with about 35% and Christiana has 20%. Adam should hope this holds up because if Christiana can pull this off, Adam would make history for all the wrong reasons. He would become the first coach ever to not have any artist in the Top 8. As of now though, Rayshun looks like he’s en route to his second instant save win of the season.

8:59 p.m. – The winner of the instant save and completing the Top 8 is: Rayshun (Team Adam)! Sadly, two beautiful voices in Christiana (Team Alicia) and Jackie (Team Adam) have been eliminated.