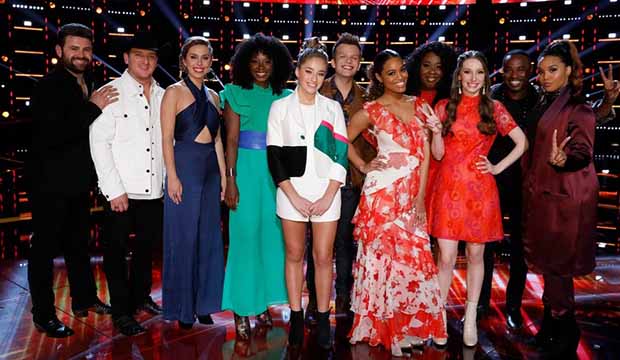 For Monday’s Top 11 episode of “The Voice,” viewers are more involved than ever. Not only do you vote for your favorite contestants, but you have helped select the songs that will be performed during “America’s Choice” week. We analyze each of these tunes and performances in our live updating blog below.

One artist who will need to be extra special this week is Rayshun LaMarr, who was voted at the bottom last week and was almost eliminated before being saved over D.R. King. Will he be able to fight forward to a Season 14 championship? Or do you have someone else in mind that will win the 2018 crown?

Here is the complete list for the Top 11, with three artists each for the coaches except for this season’s rookie:

Live updating recap and analysis below for Monday, April 30:

8:01 p.m. – Team Blake kicks off “Fan Pick Week” with a performance of “Night Moves” by Pryor. The fans picked the Bob Seger track and Blake is surprised he hadn’t realized how similar Pryor’s voice was to Bob’s, pointing out the vibrato and gravelly sound as something viewers haven’t really seen from him yet.

8:03 p.m. – I’ve got to give to the fans on this one–what an excellent song choice for Pryor. Not only does the song fit his voice so well, but he also seemed genuinely happy to be performing it. Center stage with his guitar, Pryor gave a pretty classic rock ballad performance with an effortless only pros have. The highlight was the break in the song midway through where he hit some strong, smooth notes with only a faint background by the band. This could be a series-defining performance for him.

8:12 p.m. – Sharane is dedicating her performance of Mariah Carey‘s “Hero” tonight to her twin sister. Adam is convinced that Sharane has the range and ability to take on a big, iconic song of Mariah’s, but warns her not to take too many liberties because of how well-known of a song it is.

8:14 p.m. – For a huge song like this, Sharane started it out delicately, giving us a more timid delivery of some lines that Mariah would always make really big. I think the song finally became her own when Sharane stepped down from the dais (beautifully framed by a sextet of violinists) and moved about the stage closer to the audience. And then, of course, the crowning moment of some big notes at the end that she hit with the right mix of grit and emotion.

8:24 p.m. – Kelly’s first artist tonight is Kaleb, giving his rendition of “Trouble” by Travis Tritt. We didn’t get to see the footage of him performing this once in elementary school, but Kelly was excited about the choice because it’s the first time he’ll get to show some personality through a song.

8:26 p.m. – I think it’s interesting when coaches think that an upbeat song is going to allow the artist to serve “more personality” because that’s not always the case. Look, this performance is solid and it’s probably very close to the type of music that Kaleb will make after the show, but while I got personality from the song, I didn’t see much by the way of personality from him. Overall it felt like I was supposed to be excited, but Blake put it best by saying that it showed his energy so I’ll give him that.

8:34 p.m. – Jackie Foster opens up the night for Team Alicia with “Love, Reign O’er Me” by The Who. The choice is a sign to Jackie that the audience sees her as a powerful rock balladeer. During rehearsals Alicia was shocked by how quickly Jackie picked up the feeling and power of the song, calling the preparation unbelievable.

8:36 p.m. – I loved the drama of the song, but what’s more is that Jackie, in her voice and style, delivered drama that matched the tone of the track. Though the vocal might have been lacking in spots, Jackie exuded a confidence and charisma that I’m not sure I’d seen in her yet. This was the kind of song that I think showed the personality of the performer and now we have a more complete sense of Jackie as an artist.

8:47 p.m. – Fans are giving Adam’s Jackie Verna a chance to get back to her country roots this week with “Strawberry Wine.” Jackie’s excited about the song because it’s a classic within the genre and she hasn’t done anything like it yet, despite being a country artist.

8:49 p.m. – I was not a huge fan of Jackie’s take on Avril Lavigne last week, but she has completely turned the corner for me this week. Her voice sits so perfectly within a country lyric and with this song the tenderness shines through. I think there was a dynamism to the fluctuations of her pitch and a richness to her tone that I hadn’t noticed before. In my opinion, she took a huge step forward this week!

8:57 p.m. – As a soul singer, Kyla feels like the fans know her perfectly after giving her Aretha Franklin‘s “Sweet Sweet Baby (Since You’ve Been Gone).” Blake tells her that the fact that they gave her such an iconic performer’s music means that they have faith in her talent and know that she can deliver on the promise.

9:00 p.m. – I love love love this choice for Kyla because it gave her a chance to be livelier than just belting out a ballad. Big voices like Kyla’s can do more than hold long notes, and tonight she showed us that there is flavor, energy and electricity in her talent. No shade to the other artists before her, but Kyla’s performance woke the audience up!

9:10 p.m. – Christiana is given one of Rihanna‘s biggest and most well-known hits, “Umbrella.” The plan this week is for Christian to completely transform it into something jazzier than we know it to be. Interestingly, Alicia had to personally put out a call to Jay-Z this week in order for it to be performed. So cool!

9:13 p.m. – I’ll be honest–during the verses I thought the arrangement made it really difficult for Christiana to keep pace with the lyric, but in the choruses and the bridge she really shined bright. In those moments she got to hold notes long enough to dig into them and deliver beautiful notes. Overall a pretty uneven performance, but there’s enough uniqueness there that I hope viewers throw support her way so we can see her again next week.

9:21 p.m. – For Brynn the fans love her emotional maturity and so they picked Lady Gaga‘s “You and I” for her. I think this is a great choice because it does have that emotional aspect it, but Gaga is also an artist the can reflect Brynn’s youth.

9:24 p.m. – The band didn’t change the arrangement of the song too much from the original, but Brynn somehow makes the song so completely her own here. I think she and Kelly actually achieved the swampier feeling to the song that they envisioned and that it works really well for Brynn’s deep, raspy textures. It’s really cool to see her grooving in a song and really getting down with it for a change! I don’t love it, but I like it a lot and she’s still my fave!

9:32 p.m. – After receiving the instant save last week, Rayshun is back with “Try a Little Tenderness,” a song he hopes will give him the moment he needs to escape the bottom this time. Adam loves the song for him because it reflects his spirit and energy both as a person and as an artist.

9:35 p.m. – I haven’t been into any of Rayshun’s recent song choices, but the fans got it as close to right this week I think. Finally we got to see Rayshun get a strong chorus at the end of the song that allowed him to explode into his dancing and dramatic lyrical delivery that he’s known for. I love that such a wild ending was paired with a super modest start to the song because it made it all the more electrifying when he erupted at the end.

9:43 p.m. – Second to last tonight is Britton with “Perfect” by Ed Sheeran. As a love song, Britton feels this song is perfect for him this week because it gives him a chance to sing about his relationship to one of Alicia’s former team members Livia Faith, who he’s dedicated the performance to.

9:46 p.m. – As Alicia said, I think this performance is going to win everyone over that Britton hadn’t already won over. The production of the performance as minimal was a great decision because it really upped the ante on the intimacy and romance that when matched with his smoothness and confidence made for something really special. I think he’ll be the highest artist on the iTunes charts this week and may become the first to crack the top 10 this season!

9:53 p.m. – And closing out the night is Team Blake’s Spensha with Little Big Town‘s “Better Man.” For both Blake and Spensha, this is a chance for her to live out the type of artist she wants to be which is a current country artist (as opposed to some of the more classic and traditional songs she’s done so far).

9:56 p.m. – This was a lovely night for Spensha, delivering a solid vocal with a soft and tender song the had as much drama and power that you can imagine for a country track. And honestly if you showed me this and said it was the first single from a newly crowned winner, I’d believe it! I think it was a solid breakthrough moment for Spensha and she should have gained a ton of fans this week.

10:00 p.m. – If I made my predictions now, I’d say Britton will be the highest on the charts and that we’ll see Rayshun make a huge comeback and not be in the bottom three. Instead I’d guess that based on tonight alone, Christiana, Kaleb and Jackie Foster might be in danger. What do you think? Update your predictions and sound off in the comments!

'The Voice': How to vote for the 4-way knockout and save Taryn, Julia, Larriah or Ryan

John Sullivan eliminated on 'The Voice' after 'Good As You' battle vs. Jim Ranger…