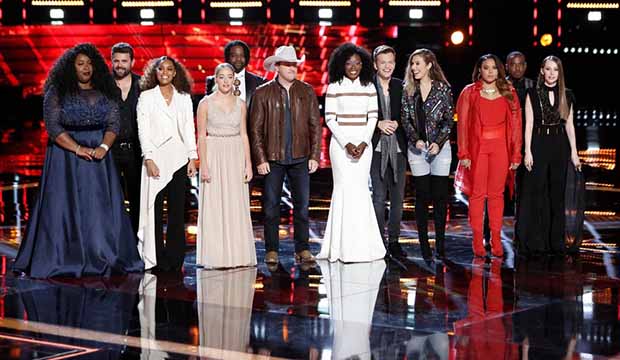 The Top 12 artists sang songs that were personal to them on “The Voice” Monday night. Who did you think was best among the dozen contenders? Do you have a favorite to win the Season 14 championship in a few weeks? Which one will be eliminated on the results show Tuesday night and who will join them in the bottom fighting for a social media instant save?

Here is the complete list for the Top 12, with three artists each for the four coaches:

Live updating recap and analysis below for Tuesday, April 24:

8:00 p.m. – Pryor Baird topped all contestants on the iTunes chart for Monday night’s performances, followed closely by Brynn Cartelli, Kyla Jade and Britton Buchanan. Bringing up the rear were Sharane Calister, D.R. King and Rayshun LaMarr, who all failed to crack the top 200 songs. Will they be also be the bottom three in America’s vote, forcing them to face off for the first instant save of Season 14? Let’s find out!

8:05 p.m. – Carson Daly kicked things off announcing a special “Happy Birthday!” to Kelly. He also noted that Britton was the most streamed artist on Apple music, despite not topping the sales chart. It sounds like tonight should be smooth sailing for the 18-year old. The first three artists announced as safe are: Britton (Team Alicia), Brynn (Team Kelly) and Sharane (Team Adam). The first two were no-brainers, but I’m glad to see Sharane live to fight another day after struggling on the charts.

8:13 p.m. – Team Kelly is joining forces to perform “Don’t Take the Money” with Coach in tow. Kelly allowed her team members to kick things off before she joined them on stage and blew them all out of the water. Awkward moments ensued as D.R. went way off key and Kaleb spoke an entire line instead of singing. This wasn’t the best showcase for Team Kelly, but at least they appeared to be having fun on stage.

8:15 p.m. – Time for more results! The next two artists who are safe are: Pryor (Team Blake) and Christiana (Team Alicia). No surprises there!

8:25 p.m. – Coach Adam brought his band Maroon 5 along tonight to perform their new hit, “Wait.” It’s a mid-tempo jam that doesn’t call for much energy on stage, and there’s not. There doesn’t seem to be any climax to this song. It looks like Kelly knows all the words already as she sings along, haha. She makes me laugh.

8:30 p.m. – Let’s get to some more results! The next two artists to advance are: Spensha (Team Blake) and Kaleb (Team Kelly)!

8:38 p.m. – Team Blake is up now singing “I Thank You” by ZZ Top. Blake always lets his team shine during group performances and tonight is no different. They all sound great belting it out together and I would say this is far superior to Team Kelly’s performance earlier tonight. This song seems right in Pryor’s wheelhouse but Spensha and Kyla are more than holding their own. Great performance!

8:50 p.m. – Up first singing “Papa Was a Rolling Stone” is D.R. He sounds gritty and powerful as he belts his way though the song but I feel like he always forgets the melody. Kelly is puzzled why D.R. is in the bottom two and admits she was not even concerned about her team tonight. She pleas for the audience to give her a birthday gift and save D.R.

8:53 p.m. – Next Rayshun is singing “I Can’t Stand the Rain.” This is a horrible song choice for him that is not something that I would choose if I was trying to reel in last-minute votes. Regardless, his energy is full-throttle like it always is. Another solid performance from Rayshun. Adam is adamant that Rayshun is a spectacular talent that is one of the best performers this season. It’s a crime if Rayshun goes home this week.

8:55 p.m. – Throughout the commercial break we are able to see the live Tweet results coming in. Rayshun is off to a HUGE lead, taking 65 percent of the votes. It looks like Kelly might not get her birthday wish after all. D.R. is in trouble!

8:59 p.m. – The final artist to advance to the Top 11 is Rayshun! D.R. has been eliminated from the competition. It’s a sad day for Team Kelly. She looks absolutely devastated. Tune in next week to see if Team Kelly can rebound with a vengeance or if the rookie coach will lose another artist.