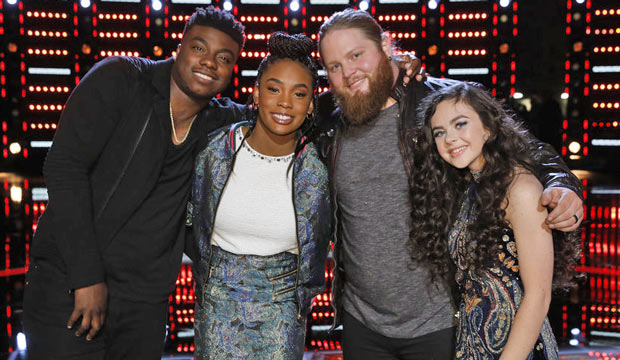 After months of competition, we’re already at the finale stage for “The Voice” Season 15. The Top 4 artists will be performing three songs each on the two-hour episode for Monday. The American public will then vote, with the champion announced on the results show for Tuesday.

If Chevel Shepherd wins, it will give coach Kelly Clarkson a second straight victory. If Kennedy Holmes wins, it means a first ever U.S. championship for coach Jennifer Hudson, although she has won in Great Britain. And a trophy for either Kirk Jay or Chris Kroeze means a seventh career victory for coach Blake Shelton. Coach Adam Levine does not have contenders remaining for this autumn cycle.

Who do you think will be the champion for Season 15? Be sure to click the link at the bottom of this article to make your predictions for first, second, third and fourth place.

We have offered feature spotlights for each of the final four singers over the past few days. Click the name for Chevel, Chris, Kennedy or Kirk to read the overview for each one.

And now enjoy our live updating blog below for Monday, December 17, as we provide play-by-play analysis of the entire two-hour episode on NBC:

8:00 p.m. – Here we go! The coaches are settling into their chairs as we begin final live performance episode of the season. The four finalists will each perform three times: A new cover, a duet with their coach and an original song. Let’s go!

8:10 p.m. – Chris Kroeze is getting this party started for Team Blake with “Sweet Home Alabama” by Lynyrd Skynyrd. I find this to be so cliche and I’m disappointed in this song choice. How many times have we heard this in singing competitions at this point? I get that he’s catering to his fan base, but any front man in your local bar can do what Chris is doing right now. Vocally the performance was solid, but it was also completely forgettable. Apparently the coaches haven’t been to the same local bars I’ve been to lately; they gave him a standing ovation.

8:20 p.m. – Chevel Shepherd is putting her stamp on a classic for Team Kelly tonight with “It’s a Little Too Late” by Tanya Tucker. Chevel began the performance with a bluesy intro before counting off “1…2…3…4” and launching into her Honky Tonk sass. Chevel has progressed at the perfect pace in this competition and Kelly is a genius coach. This is a brilliant uptempo choice that doesn’t lose her vocal quality and shows off her fun side. Kelly is convinced Chevel will win “The Voice” and she might be right! The coaches gave her a standing ovation as well.

8:30 p.m. – Kirk Jay is continuing things for Team Blake, debuting his original single “Defenseless.” It’s a simple, soulful country ballad which is what Kirk does best. He begins his performance sitting on a stool, perched on a raised stage and backed by three-piece band. These original songs can be difficult to resonate with audiences, since they’ve never heard them before. I’m not sure if I’m completely sold on this one, but the recording might grow on me. For right now, I’d say Kirk is lucky his cover song has been saved for his final performance. The coaches gave him a standing ovation though. Potentially even more helpful to Kirk’s cause was Blake’s commentary. He praised Kirk’s ability to bring new fans to country music and gave him an emotional welcome to the country music family. This is why Blake is so good at this! The coach’s comments matter!

8:40 p.m. – Kennedy Holmes from Team Jennifer is closing out Round One tonight with her original song, “Love is Free.” It’s a mid-tempo jam that packs a punch and I’m happy it’s not a ballad. It could be even more of a dance jam, but this is okay. Her vocal take on it reminds me a little bit of Brandy. Her stage presence for her age just blows me away every week. I’m not completely sold on the song, but I like that it gave Kennedy an opportunity to dance around a bit.

8:50 p.m. – The first coach/artist duet of the night pairs Blake and Kirk on the George Strait classic, “You Look So Good in Love.” It’s an old-school ballad, which surprises me. I thought Blake would help Kirk take it up a notch with a more fun song, but this is nice. Blake took the first verse, but Kirk blasted into the second verse, taking it up a key. I love that they added a bit of humor to it, with Blake speaking about Kirk’s beauty. While it may not have been my song choice, their chemistry was enough to get Kelly on her feet midway through the performance. Kirk’s vocal run at the end sent Blake into a fit of laughter as the audience went wild. Well done!

9:00 p.m. – The next coach/artist duet will be Jennifer and Kennedy singing “Home” by Stephanie Mills. Jennifer began the performance with her round rich tone, which Kennedy quickly complimented with her fresh, young vocal. When I heard they would be performing this song I thought it was a terrible idea because I figured Jennifer would mop the floor with Kennedy, but this 14-year old’s ability to hold her own is jaw-dropping. Saaang ladies! Bravo!

9:05 p.m. – Chris is up next with his original song “Human.” It’s got a good melody and on first listen I’d say he has a better original song than either Kirk or Kennedy. My issue with Chris is that he brings absolutely nothing to the performance. Every time he sings I’m left wanting more, even though he sounds good. They brought out a full choir to try and make things more interesting, but even that doesn’t help. The stage presence just isn’t there.

9:15 p.m. – Next, Kelly and Chevel will duet on “Rockin’ With the Rhythm of the Rain” by The Judds. It’s a playful, bluesy song but may not have been the greatest song choice. Kelly allows Chevel to shine on the first verse, taking the low part while Chevel belts it out. She sounds good, but Chevel seems a bit lost to me. I couldn’t really understand her and I’m not sure if she had issues remembering the lyrics or trouble finding her place in the music. Overall it was a cute performance, but they lacked the chemistry of the previous artist/coach duets.

9:25 p.m. – Blake is back for a duet with Chris, who will be finished for the night following this performance. They’re teaming up for “Two More Bottles of Wine” by Delbert McClinton. Blake joked with Chris before the performance to “have some energy!” I know he said it in jest, but it’s actually the issue I’ve had with Chris all season. It’s a fun jam session on stage with both of them playing guitar. Like a true star, Blake is full of energy while Chris stares straight forward like a deer in headlights. Ugh, it’s frustrating to watch. Well, Chris is. Blake was enjoyable.

9:35 p.m. – Kirk’s final performance of the night is going to be “I Won’t Let Go” by Rascall Flatts. It’s a full-circle moment for the country singer, who performed their song “Bless the Broken Road” for his Blind Audition. While Kirk has been good tonight, he needs to hit this one out of the ballpark if he wants to nail down this win. Backed by a piano player and a full orchestra, he’s certainly pulled out all the stops. The first couple verses are solid, but what I appreciate most about Kirk is the sincerity when he sings. Then, when he hits the modulation at the chorus he sets off those goosebumps I’ve been waiting for from him all night. Blake can only laugh when he watches Kirk cut loose at this point. Great job.

9:45 p.m. – Chevel is debuting her new single, “Broken Hearts,” for her final performance. It’s a song that her coach Kelly had planned to record at one point, but it didn’t work out. Now she’s gifting it to Chevel to show off her storytelling ability. She looks absolutely stunning in a pink gown and her voice is gorgeous on this song. I’ve only heard the first verse and I can already say it’s the best original song by a mile. It’s the only one that instantly sounds like a radio hit. I love her laid back approach to it as well, she really NAILED this. Wow!

9:59 p.m. – Closing out the show is Kennedy with her cover of “Confident” by Demi Lovato. I love that Kennedy wants to throw down for her final performance instead of the predictable, typical ballad. She walks down a giant set of stairs backed by an entire marching band and a stage full of dancers. Yes! This girl has nerves of steel. Without question Kennedy has more stage presence than anyone this season. I feel like I’m watching a MTV Awards performance. I don’t know if this is the type of performance that will resonate with voters, but Kennedy is insane. Her dance routine at the end was EVERYTHING. Wow! What a way to close the show! I don’t even know what to say at this point. Jennifer looks absolutely shocked by what Kennedy just did on that stage. The crowd is going absolutely gangbusters.

'Dancing with the Stars': As Natalie Portman would say, Nev Schulman's 'Black Swan' paso doble was…

'Dancing with the Stars' odds (Week 7): Justina Machado waltzes her way back to the top as Johnny and…

'Dancing with the Stars' Villains Night recap: Who was the best at being bad, and who was killed off at…

Hurry, 'Big Brother 22' fans: Time is running out to vote for America's Favorite…

Will 'Dancing with the Stars' be cruel to Chrishell Stause? Our odds say she may be eliminated on…

Tracking 'The Voice' 4-chair turns for Season 19: John Legend is 2-for-2 thanks to Tamara Jade and Cami…