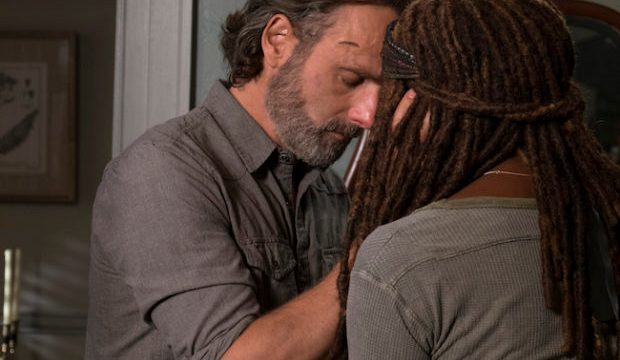 The new showrunner of “The Walking Dead,” Angela Kang, didn’t mince words on how she feels about Andrew Lincoln leaving the show this year after nine seasons playing zombie apocalypse hero Rick Grimes. “We’re all sad about it,” Kang told Chris Hardwick on Sunday’s “Talking Dead.” “He’s amazing, but I think we have such an incredible cast — it’s an ensemble cast.” Lincoln is set to leave sometime in Season 9, which premiered October 7 on AMC with an extended episode titled “A New Beginning.”

Kang referenced the three cast members who appeared live in the studio — Jeffrey Dean Morgan (Negan), Melissa McBride (Carol) and Norman Reedus (Daryl) — as evidence of the show’s ensemble nature. “[Everyone] really brought a thousand percent, a million percent, to this season,” Kang explained about Season 9, her first as showrunner (replacing Scott M. Gimple) after serving as a writer and producer on the zombie drama.

AMC is going all-in on Lincoln’s departure, teasing “Rick Grimes’ final episodes” during its trailers for the new season. “I think everybody really pulled together to make a great season for Rick’s exit,” notes Kang. “And then these stories continue on and we get to see characters and character combinations that either we miss or that we haven’t seen much of before. I think there’s a lot of really interesting stories to tell going forward.”

SEE ‘The Walking Dead’: 6 things you need to remember before Sunday’s Season 9 premiere

Over the past nine seasons Rick has gone through a whole hoard of drama, including dealing with the deaths of his best friend Shane (Jon Bernthal), his wife Lori (Sarah Wayne Callies) and his son Carl (Chandler Riggs). But there’s also been happiness for the former sheriff, as he’s now the proud father of Judith and has found love again, this time with Michonne (Danai Gurira).

The big question that all fans of “The Walking Dead” currently have is how will Rick leave the series? Will he die in a blaze of glory? Will he be eaten by a walker? Or will he simply leave Alexandria to live as a nomad on his own? We’ll all find out soon enough.