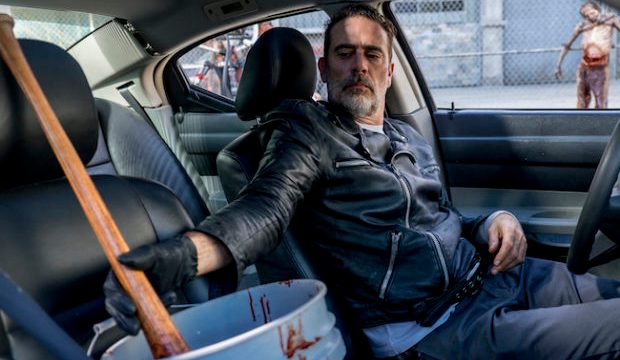 “The Walking Dead” is shifting focus to Hilltop Colony in the latest episode of Season 8. The Saviors are on their way to exact revenge, but not all will go as planned. Cracks emerge in The Savior ranks and a benevolent new face arrives on the scene in the nick of time. Let’s dive in to the exciting developments in “The Key.”

“They Don’t Scare” – Negan (Jeffrey Dean Morgan) barges into Dwight’s (Austin Amelio) room to welcome him back into the fold. The tension in the scene revolves around whether or not Negan buys Dwight’s lie about an ambush taking him away from The Saviors, but I can’t stop concentrating on the wedding ring Dwight is fondling. The writers definitely seem like they’re telegraphing Sherry’s return. Dwight doesn’t have much time for reminiscing though, since Negan and The Saviors are heading out to Hilltop armed with zombie tainted weapons. Dwight is stuck riding in a truck with Simon (Steven Ogg), who questions Negan’s tactic of intimidation. Simon notes that Team Family hasn’t cowered or caved yet despite losses: “they don’t scare.”

Moving Forward – After finally arriving at Hilltop, Rick (Andrew Lincoln) sits lost in thought at Glenn’s grave. Daryl (Norman Reedus) finally apologizes for his botched garbage truck plan at The Sanctuary. “I just wanted it done” says Daryl, and Rick almost instantly forgives him. Maybe it’s Carl’s death that has them making amends so quickly, but at least we are spared another pointless Daryl vs. Rick fight. Maggie (Lauren Cohan) spies the exchange from the lookout perch and wonders aloud whether Rick can come back from losing his son. “Have you come back?” asks Rosita (Christian Serratos), “we just keep going.” Rosita is cut off from spewing any further philosophy when Maggie spots a crate in the distance with a shiny flag. Who’s leaving mail in the apocalypse?

Mad Max: Zombie Road – By listening to the Savior radio, Rick is able to catch the Savior’s envoy before they reach Hilltop. As they pass through a town, Rick speeds down a side street to ram into Negan’s car. A mad chase ensues, leaving Negan’s vehicle overturned. The bucket of zombie guts he used to coat Lucille is splashed across the interior of the car.  Rick fires a rifle wildly at Negan. The villain dashes into a nearby building and Rick follows closely behind, barely dodging a few deadly swipes with Lucille. Rick runs out of bullets, allowing Negan to take the high ground up a set of stairs. But Rick refuses to take his bait, and hurls his axe at Negan’s head. Negan dives out of the way but tumbles over the edge of the stairway landing, only holding on by his fingertips. Before Rick can deliver another blow, Negan releases his grip and plummets through the floorboards below.

Simon’s Coup – When Simon spots his boss in trouble, he decides it’s the perfect opportunity for a coup. He commands The Savior army to hold position and takes Dwight with him to find Negan. “You must have thought about it” he tells Dwight, “capping him yourself…if it was my call I would make sure The Saviors survive.” Dwight is obviously not a fan of Negan, but also hesitates to back Simon’s “murder-everyone-and-move-on” plan. When the two discover Negan’s car, Dwight finally caves to Simon and flicks his cigarette on the wreck to light it ablaze. The two return to the Saviors instead of searching for their boss any further. Simon tells the group that all they found was blood and the leader was likely gone. After a rousing group round of “I am Negan”, Simon convinces them that the people of Hilltop deserve worse than intimidation. “We must expunge them.”

Alone in the Dark – Negan is still alive after his fall, of course. Rick hunts him down through the darkened halls, shouting “this is where you die. In the dark, alone.” In honor of Carl, Negan tries to tempt Rick with one final deal. Rick scoffs that he would never take a deal from him after seeing how he wiped out The Scavengers. It’s the first time Negan learns of Simon’s betrayal. A smile crosses Rick’s face when he discovers Lucille on the ground. He lights the bat on fire and begins breaking down a boarded up door labeled “eaters.” Overcome with rage, Negan tackles Rick through the door and ends them crashing into a room swarming with walkers. The two battle each other and the undead, with Rick in relentless pursuit of Negan despite close calls with zombie teeth. Eventually Negan launches himself out a window and escapes.

The Crate – Inside the crate Maggie discovered is a note “If you fill the crate with food or phonograph records, I will gladly exchange them for a key to the future.” Maggie is hesitant to take the bait, but Michonne (Danai Gurira) convinces her to not pass up the opportunity for help. They drive to the designated meeting spot with Enid (Katelyn Nacon), and come across a van with two women guards and their leader: Georgie (Jayne Atkinson). Dressed in a bright seersucker pantsuit, Georgie is an odd duck (she hopes the phonographs are music because she “won’t accept spoken word”). Maggie plans to take their supplies by force, and Rosita emerges from the woods to help take weapons from the strangers. As Rosita searches the van, Georgie interrupts and admits that what she has to trade is knowledge. “The dead have brought out our best and our worst” she says, “and the worst has been outpacing the best. But that won’t last forever.” Everyone is wildly skeptical of this strange woman’s blind trust, so Maggie insists on taking them back to Hilltop.

SEE‘The Walking Dead’ episode 11 recap: Vengeance and faith lead to conflict in ‘Dead or Alive Or’

The Key – Faced with limited food and supplies, Maggie’s first instinct is to hold Georgie and her guards at Hilltop and use their food to feed for her own people. Michonne is again the voice of compassion, and advocates their release before The Saviors arrive. That’s the type of move Carl would have wanted. Maggie relents and presents phonograph records for trade, but Georgie changes the deal by offering Hilltop their food. Then she presents Maggie with a manuscript titled “The Key to the Future.” It’s a compendium of schematics of “medieval achievement” such as aqueducts and refining grain, “so that we may have a future from our past.” Georgie lets Maggie know that she will return sometime in the future, and has faith that Maggie will have progressed her community into a prosperous one.

A Woman Scorned – Negan awakes in the passenger seat of a car. The camera pans over to reveal that the driver is none other than Jadis (Pollyanna McIntosh). Negan is barely able to take in the gun pointed at him and smile at his captor before she promptly knocks him unconscious. Is Negan destined for the junkyard meat grinder?