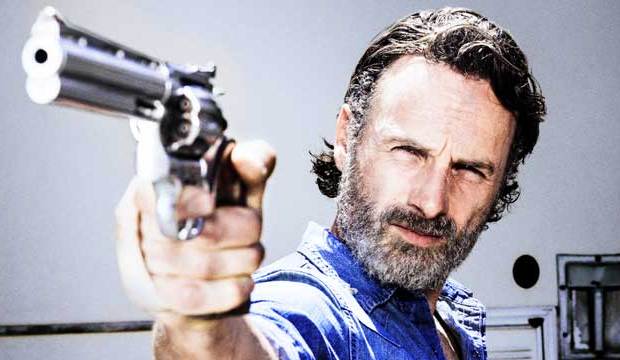 Fans have dreaded the fifth episode of “The Walking Dead” Season 9 because it has been advertised as the final episode for Rick Grimes (Andrew Lincoln). After being impaled on a metal rod in last week’s episode, this week focuses on a harried emotional journey for Rick. Not only must he constantly escape the swarm of walkers at his back, but also the ghosts from his past. Here are the five most shocking moments from “What Comes After,” including Rick’s ultimate exit from the series.

Three Spirits
Rick miraculously lifts himself off the piece of rebar, his abdomen gushing blood, and flees to camp on the white horse. But spirits of the past haunt him as his consciousness shifts in and out of reality. He passes out and imagines he’s in his squad car with Shane (Jon Bernthal). They catch up at the site where Rick was shot in the series premiere, and Rick apologizes for having to kill his best friend. But Shane thinks some of himself rubbed off on Rick and gave him the brutality he needed to make hard decisions.

After fleeing from the circling walkers once more, Rick drifts back to the Greene Farm. An angelic Hershel (Scott Wilson) ensures Rick that there is no need to apologize for the suffering Maggie (Lauren Cohan) has endured. Rick is adamant about finding his family, and briefly suggests he should give into death and find them here with Hershel. But the old farmer insists that Rick must push on.

Finally, Rick envisions himself in the Atlanta hospital. The infamous “Don’t Open, Dead Inside” doors appear with the word “don’t” crossed out. Rick steps through this portal to a horrifying sight: every character, past and present, lies dead before him. It’s a sea of bodies that stretches to the horizon. Sasha (Sonequa Martin-Green) rises up with kind words to keep him going. “We don’t die. It’s not about you, or me, or any one of us. It’s about all of us” she explains. “Your family. You’re not going to find them because they’re not lost. You’re not lost.”

“Kill Me”
Maggie enters Alexandria to kill Negan (Jeffrey Dean Morgan), but Michonne (Danai Gurira) has already been informed and stands guard at the jail. She begs Maggie to back down and find another way to deal with grief. “If Rick was butchered in front of you and you had a child to raise on your own because of him, he’s be dead by now and you know it” Maggie counters. Unable to respond, Michonne tearfully hands over the keys to the cell. But Maggie is surprised by what she finds inside. She orders Negan to his knees and he uses his typical bravado to get under her skin. But his sneering “kill me” quickly turns to begging. When Maggie asks him why he wants to die, he cries “so I can be with my wife…I’ve tried to do it but I can’t. It has to be you.” Realizing he is a broken man, she lets him live. “I came here to kill Negan, but you’re already worse than dead.”

The Bridge
After a fake out dream sequence where the entire camp rushes in to fend off the zombie herd, Rick instead finds himself alone by the bridge. He’s bleeding out and feels the end coming, so he shambles across the bridge, hoping the walkers will follow and cause the structure to collapse under the weight. But the bridge holds and zombies cross to the other side, ready to devour him. Suddenly an arrow takes out a walker. Daryl (Norman Reedus) is firing from the opposite shore. All of the communities are there too, and they try in vain to distract the herd to save Rick. But he refuses to let his family put themselves in danger. So despite screams of terror from Michonne, he points his gun at a box of dynamite and fires. The bridge explodes and crumbles, walkers pour into the river, and Rick is gone.

“B”
Jadis (Pollyanna McIntosh) is downstream, ready to meet the helicopter for extraction. She’s ready to overtake those inside and commandeer the aircraft since she doesn’t have the requisite “A” for trade. But she spies the bridge explosion from a distance, and soon spots Rick as he washes ashore amid the charred zombie parts. She frantically radios the chopper claiming “I have a B” and begs them to take him. “I’m just trying to save a friend, a friend who saved me.” Rick later wakes up in the helicopter as Jadis happily tells him that he is saved. So, Rick ultimately survived, but where he is headed and when he will be seen again is a mystery.

Six Years Later
After a time jump, we see a group desperately fending off walkers. Exhausted and outnumbered, the group prepares to defend themselves to the death. As they become surrounded, shots are fired from the nearby woods and zombies drop to the ground. They make a break for it and find a young girl among the trees. The girl asks who they are, and we discover it’s Magna (Nadia Hilker) and her crew. An important group in “The Walking Dead” comics. But the real kicker comes when Magna asks the girl’s name. She bends down and places Carl’s hat on her head and replies: “Judith Grimes.”