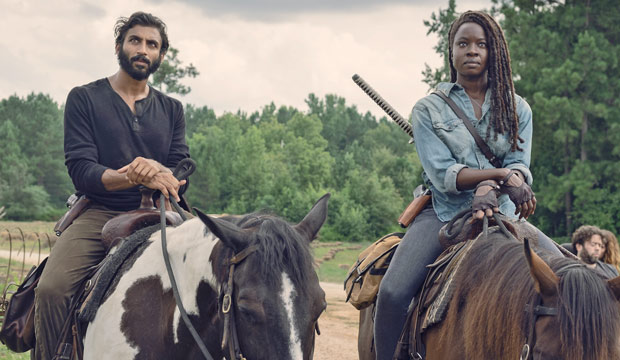 An eerie storm and foreboding fog descend upon the survivors in the Season 9 mid-season finale of AMC’s “The Walking Dead.” Episode 8, “Evolution,” made it clear that the series intends to bring a horror element back to the hit series. It turns out there is still plenty to fear when darkness descends. A villain is set loose, a search party contends with an aggressive herd, and not everyone makes it through the night. These are the five most shocking moments of “Evolution.”

Mind of Their Own
Daryl (Norman Reedus), Aaron (Ross Marquand), and Jesus (Tom Payne) spy on a herd of walkers as they search for Eugene (Josh McDermitt). The one hundred-strong horde behaves strangely, milling about in tight circles instead of walking straight ahead. As the trio presses on, Daryl hears the herd at their backs. He tosses an alarm clock to distract the zombies so the party can rush into the woods. But Jesus is concerned as to how the herd followed them, and once it comes into view notes that it has doubled in size.

Burnt Bridges
Michonne (Danai Gurira) arrives at Hilltop to a chilly reception. She has a tense greeting with Tara (Alanna Masterson), who informs her that Eugene is missing and Aaron and Jesus have been meeting in secret. A conversation with Carol (Melissa McBride) is no less strained. Carol begs Michonne to send a delegation from Alexandria to the upcoming trade fair. “We used to be family” says Carol. Michonne assures her that they still are, but remains steadfast in her “closed borders” position. “We have to take care of our own now” she says, as Carol bristles and walks away. In the infirmary, we come close to getting more details on the rift Michonne caused with Hilltop and The Kingdom. But before she divulges anything of substance, Rosita (Christian Serratos) awakes in a terrified frenzy. She knows what Eugene and the search party is up against and tells Michonne “they have no idea what they’re up against.”

Jailbreak
Gabriel (Seth Gilliam) tries in vain to offer help to Negan (Jeffrey Dean Morgan) in the form of meditation sessions. But Negan treats their time together as a game, constantly searching for ways to get under the priest’s skin. Gabriel puts up with these shenanigans until he hears that Rosita is injured and he can’t go be by her side because he must look after the prisoner. After Gabriel storms out of the jail, Negan tosses a ball around while a storm rages outside. When the ball falls outside the cell bars, he realizes the door to his chamber hasn’t been locked. He gently pushes the door open with a grin and sets out into Alexandria.

Moonshine
Henry (Matt Lintz) falls into teenage despair when he spies his crush Enid (Katelyn Nacon) kissing Alden. But a trio of teens is determined to cheer up the mopey new kid. Somehow they don’t grasp the high stakes of the apocalypse, and think it’s a great idea to get wasted on moonshine before sneaking out into the woods at night. Of course, they are type of idiots who un-ironically refer to last call as “last laughs,” so it’s not a huge surprise. They also dug a pit in the ground and used a cat as bait to catch the undead. Charming. The leader of the trio, Gage (Jackson Pace), shows off a trapped zombie like a frat boy brandishing a trophy and encourages his pals to urinate on the walker. This upsets Henry, who drunkenly leaps into the pit, fells the creature, and passes out from the booze. Predictably, Gage and his cronies flee the scene. Disappointingly, there are no hungry undead mouths nearby to devour Gage.

Whispers
The search party finds a terrified Eugene, who is convinced the herd is searching for him. To Daryl’s astonishment, the herd emerges through the fog of the storm and the group hurries away. Daryl stays back to let Jesus and Aaron help the limping Eugene escape the zombies, but the firecrackers Daryl distracts them with do nothing. The monsters initially go towards the sound, but quickly about face and set off after Eugene. The trio squeezes through a hole in a cemetery wall to escape the horde, but the gate on the other side is stuck shut. Aaron and Jesus unleash a flurry of tandem attacks straight out of a video game to protect their injured friend. Michonne, Magna (Nadia Hilker), and Yumiko (Eleanor Matsuura) soon arrive on the other side of the wall and work to open the gate. Jesus sends Aaron back to help with the effort as he single handedly takes on the herd of zombies with high flying kicks.

When the gate is finally opened, Jesus ceases his acrobatic combat and walks back to his friends. Suddenly, a walker springs to life with remarkable agility. It lunges behind Jesus and stabs him in the side with a knife. It holds the stunned warrior close and whispers “you are where you should not be” before Jesus collapses dead. Aaron screams and the group rushes forward to kill the attacker as several other walkers produce knives. When they’ve all been defeated, Daryl slices through a seam in the back of the walkers head. The zombie-skin mask comes off revealing a human male underneath. Whispers are heard closing in around them as the group circles up to defend themselves. The Whisperers have arrived.