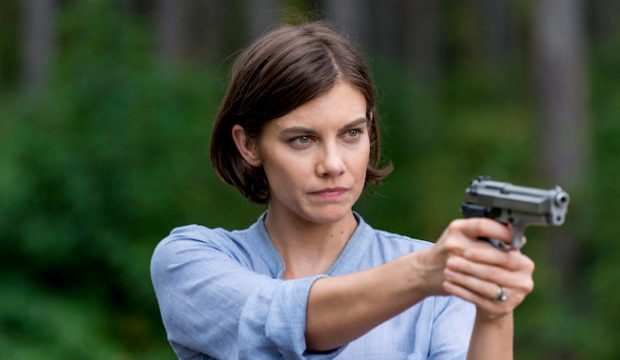 The most recent episode of AMC’s “The Walking Dead” provided one of the most fascinating scenes in recent seasons. “The Key” introduced us to Georgie and the potential of a greater world. The character presents viewers with a boatload of lingering questions. Number one on the minds of comic book fans: Is the show about to skip several years of major comic book storylines?

I was first drawn to Georgie because she’s played by the wonderful Jayne Atkinson, and I’m thrilled the actress has lined up another high profile gig after years of her underrated performance as Cathy Durant on “House of Cards.” It’s also refreshing to come across a benevolent new group instead of one lead by a psychopath. But more pressing for fans of the source comics is that Atkinson’s Georgie bears some similarities to members of The Commonwealth. And that could signal that the show is about to ditch the novels and forge ahead new storylines.

The Commonwealth is the most massive settlement in “The Walking Dead” mythos. It’s city of some 50,000 survivors, is protected by a heavily armored military, contains creature comforts like electricity and plumbing, and retains culture from the pre-apocalyptic world. Some fans have speculated that the helicopter that keeps turning up belongs to this group. Georgie’s desire to collect music would fit in with The Commonwealth’s goals from the comics.

What’s jarring is the fact that The Commonwealth has only recently appeared in the comics. They are part of The New World Order arc, which only debuted in issue 175 in January 2018. For reference, the show is currently in the middle of the comics’ All Out War arc, which should bring us roughly to the events of comic issue 126. Could the TV series really bypass several seasons worth of material to catch up with its source material? “Catch up” is not really the right term either. Since The New World Order storyline is currently on three issues deep, the show would easily bypass the comics “Game of Thrones”-style if they start adapting The Commonwealth for the screen.

It is worth noting that while the citizens of this super city do not appear in the flesh until issue 175, contact is made with them much earlier via a radio. Since the show has already spent a great deal of time featuring communications over radios and walkie talkies (and let’s not even mention the phone calls with ghosts), the showrunners may have ditched that aspect in favor of a face to face meeting. In that sense, Maggie (Lauren Cohan) may not hear a peep from Georgie for a long time and the showrunners are playing the long game with The Commonwealth storyline.

It’s true that Georgie might be a unique character who is not based on any comic book lore. Jadis (Pollyanna McIntosh) and her Scavengers were certainly not found on the page. But this development, as well as Carl’s shocking death, put “The Walking Dead” in an exciting position. Gone are the days when fans of the books could predict who would die and when. The show is following its own path and anything can happen.