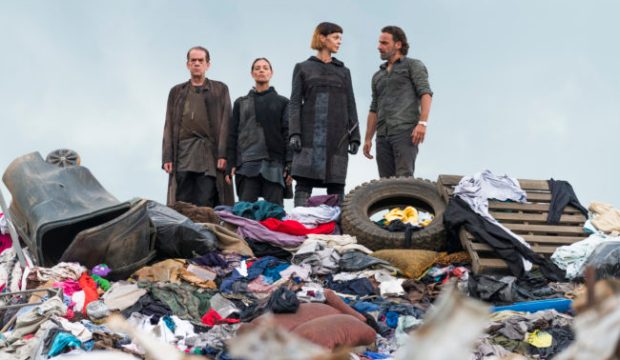 Helicopters keep popping up on “The Walking Dead.” Or, more likely, it’s just one helicopter that is continually spotted or mentioned throughout the past two seasons. The most recent episode, “The Lost and the Plunderers,” may have hinted at its owner.

The helicopter mystery began back in the Season 7 episode “New Best Friends.” During a moment when Rick (Andrew Lincoln) surveys the junkyard atop a giant garbage pile, a strange object flies through the sky behind him. Eagle-eyed fans were convinced the object was a helicopter. Debate raged on as to whether its inclusion was intended or if it was something production forgot to remove from the green screen background.

Then in Season 8’s episode “The Big Scary U,” Rick spots a chopper flying overhead after his fight with Daryl (Norman Reedus). Although a helicopter sighting would be incredibly rare several years into the zombie apocalypse, he never speaks of it and seems unfazed by its appearance.

In last week’s “The Lost and the Plunderers,” a major clue to this mystery arrives in a blink-and-you’ll-miss-it moment during the tense showdown between Simon (Steven Ogg) and Jadis (Pollyanna McIntosh). “What was this place?” asks Simon. “What’s up with the helipad? The solar panels?” A close look at the junkyard vista in “New Best Friends” reveals the presence of said helipad and solar panels in the distance. Jadis says it’s just a dump, but she is clearly hiding something.

Since Simon only mentions the helipad, it’s safe to assume the helicopter is not currently at the junkyard. So if the aircraft indeed belongs to Jadis, that might mean one of her disciples was not present for Simon’s slaughtering of The Scavengers and is out flying somewhere.

And if the helicopter Rick spotted is not in Jadis’ possession, she at least has a perfect place for it to land. That would provide the opportunity for the sole survivor of the junkyard to ally herself with a new powerful group, should one descend from the sky. In either case, Jadis has no love for Rick or The Saviors after the murder of her people. If a helicopter is part of her arsenal, she could be a huge threat to everyone.