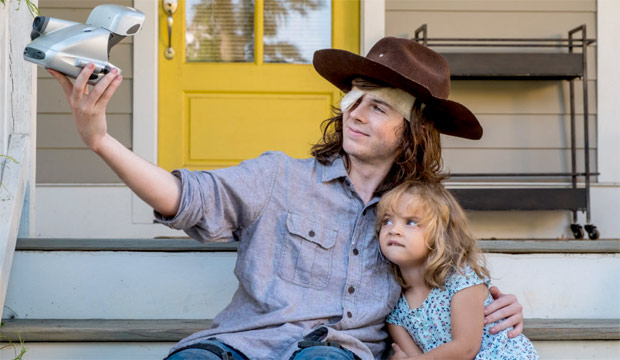 “The Walking Dead” Season 8 returned this Sunday with the devastating mid-season premiere, “Honor.” In this super-sized episode, Alexandria reels from The Saviors’ attack, one survivor suffers a mental break, and audiences say goodbye to one of the series’ original characters. Here are the best moments from “Honor.”

Back to Before – The episode begins with the shot of Rick (Andrew Lincoln) from the season premiere, muttering “my mercy prevails over my wrath” while tears roll down his cheek. A stained glass window hangs overhead. But then we see his heavenly vision of the future, where an older Rick leads a blissful life with Judith. Finally, we travel to the moment where Carl (Chandler Riggs) was bitten. He brings his new friend Siddiq (Avi Nash) to Alexandria without mentioning his wound, but Rick and Michonne aren’t there. Worried he will die before they return he spends the hours before the Savior attack writing goodbye letters to everyone he loves.

“It just happened” – In present day, citizens of Alexandria are still hidden in the sewer tunnels as the Saviors bomb their home. Rick and Michonne (Danai Gurira) stare in disbelief at Carl’s wound. “I got bit. It wasn’t the Saviors,” Carl tells them. “It just happened.” Siddiq offers Carl pain pills from his bag to ease the fever, and we discover that he has doctor training. Michonne slams Dwight (Austin Amelio) in a wall in a rage. “Make it stop” she pleads. “They’ll listen to you.” But Dwight urges the group to stay underground until The Saviors leave. After they’ve gone, the survivors will flee to Hilltop. “It’s not supposed to be like this” despairs Carl. “I know it can be better.”

Morgan on Edge – Carol (Melissa McBride) and Morgan (Lennie James) find each other at The Kingdom and formulate a plan to rescue Ezekiel (Khary Payton). When they sneak up on the first group of Saviors, Morgan silently executes them in brutal fashion. Carol shows visible concern for her friends barbarism but she urges him to clear a building with her. But Morgan, spotting more guards, marches towards a new set of kills. Despite Carol’s protests to leave them be, Morgan skewers the men with his staff. It’s obvious that Morgan is back to his “Clear” ways, except now he’s clearing Saviors instead of zombies.

Savior Conflicted – Gavin (Jayson Warner Smith) has been commanded to take Ezekiel back to The Sanctuary for execution, but appears genuinely conflicted over the prospect. He laments that Ezekiel had to mess with the status quo and bring about death. “It always has to get dark, ugly, inhuman. You know I don’t like this right?” While they sit locked inside the King’s former theater-turned-throne room, Ezekiel reminds the Savior that it’s never too late to change one’s mind. Gavin considers Ezekiel with visible respect, but scoffs that he has passed the point where change is possible.

Morgan Breaks – Without warning, Carol and Morgan burst into the theater guns and grenades blazing. Gavin is hobbled with a shot to the leg, and his men are quickly mowed down in a hail of bullets. One Savior survives a gut shot and tackles Morgan to the ground. To everyone’s shock, Morgan reaches his hand into the man’s bullet wound and rips out his entrails for a Mortal Kombat style fatality. A horrified Gavin limps out of the room, but Morgan pursues him with the slow menace of Jason Voorhees. He eventually corners Gavin, but Ezekiel and Carol beg him to be better than the enemy and spare Gavin. The aikido master shakes his head and lifts his staff: “I have to.” But Gavin is speared through the throat from behind before Morgan delivers a blow. Young Henry from The Kingdom is the killer, avenging the death of his brother Benjamin from last season. More innocence lost.

Honor Him – Another “Old Man Rick” vision of idyllic life in Alexandria depicts Eugene picking apples. But in the real world, Alexandrians are fleeing to Hilltop. Michonne wants to bring Carl, but Rick knows that his son will never make it that far. In a final goodbye to his baby sister, Carl tells Judith to “be good” for their Dad. “Honor him. Sometimes kids got to show their  parents the way.” In a gut wrenching move he hands her Rick’s sheriff hat he’s worn for years, because it always made him feel as strong as his dad. “Mom said I’d beat this world. I didn’t. But you will” Carl tells Judith. Siddiq is the last goodbye of the group, swearing to always honor the boy that brought him in.

A Father’s Promise – Rick and Michonne drag Carl above ground so he doesn’t die in a sewer. With Carl’s body failing, they only make it as far as the church. Carl confesses that he is haunted by a memory of killing a boy from Woodbury who was surrendering after the prison attack. He is disturbed by “how easy it was.” Rick tries to soothe his son by reminding him that he was just a boy. But Carl admits that what allowed him to change was Rick’s decision to stop fighting at the prison and allow others inside to live peacefully together. “You can’t kill all of them Dad” Carl says. “There’s gotta be something after. I know you can’t see it yet but I have.” As Carl describes his vision of the future, the scene fades to the heavenly version of Alexandria we’ve seen this season. These visions have been Carl’s all along! “I’m going to make it real” says Rick, “I promise.”

A Son’s Lesson – Rick is wrecked, unable to process his son’s looming death. He apologizes for not keeping Carl safe: “A father’s job is to protect his son.” “No” counters Carl, “Love. It’s just to love.” Carl reaches for his gun, but Rick and Michonne plead with him to let one of them do the deed. But Carl refuses to cause them anymore pain. Rick and Michonne sit silently on the porch of the house. What seems like eternity goes by. They hear the gun go off. The two of them bury their child in Alexandria.

The Future? – In yet another vision of the ideal future, Judith approaches a man in Alexandria’s garden and greets him warmly. The man turns to the camera and we see it’s Negan (Jeffrey Dean Morgan). “Good morning to you darling” he coos. The audience doesn’t have time to pick their jaws off the floor yet, because the scene transitions to another glimpse of another future, this one vey real. Rick sits crying beneath a tree with stained glass windows hanging from its branches. His hand is bloody and he appears to have a wound on his abdomen. Is this the actual fate awaiting Rick?