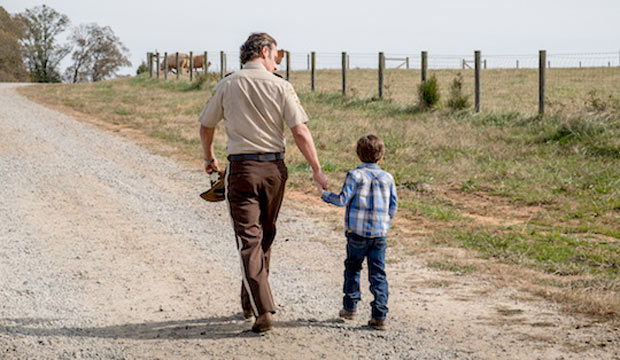 “All Out War” has enveloped Season 8 of “The Walking Dead.” In Sunday’s epic season finale, “Wrath,” the two sides clashed in one last fight. Alliances were tested, emotions were high, and viewers were treated to one hell of a boss battle. Read the recap below to discover the shocking way the war was ended, and how a new confrontation might be brewing.

Preparing for Battle – As Hilltop gears up for war, Rick (Andrew Lincoln) mutters “I remember” to himself. He sees a flashback of holding a young Carl’s hand as father and son walk down a country road. Back in the present, Rick tucks in Judith and examines himself in the mirror. He seems to be asking himself if he’s lived up to his son’s memory. Siddiq (Avi Nash) walks in on him, and Rick implores the new recruit to give the full story about how his son died. After hearing the unfortunate tale, he heads outside to discuss the plan of attack with Maggie (Lauren Cohan). They wonder whether they are walking into a trap (they are), but stick to a route where they will be able to spot anyone coming.

Negan’s Gambit – At the Sanctuary, Eugene (Josh McDermitt) lets Negan (Jeffrey Dean Morgan) know that the bullets are all ready. Negan even tests out the ammo on a custom made Rick target. Negan demands Gabriel (Seth Gilliam) ride with him on the way to war, so the priest can hear his confession. It turns out that the scouting party Negan just sent ahead is a human sacrifice. He tasks them with creating a roadblock, knowing Rick’s group will easily defeat them and be lulled into a false sense of security. Appalled at the “confession,” Gabe tosses himself out of the moving vehicle and flees into the forest. But he doesn’t get far before he is stopped by Eugene and brought back to the Savior envoy.

Disturbed – Morgan (Lennie James) continues to be in rough mental shape. First he knocks Henry to the ground because of the voices in his head. Then at the above mentioned roadblock, he brutally executes the last Savior despite the unarmed man’s attempted surrender. Jesus (Tom Payne) tries to offer some psychobabble to calm Morgan’s mind (and also to remind viewers he exists after basically not speaking all season). “I have a simple proposal” he says, regarding Morgan’s drive to kill: “This end for the dead,” motioning to the pointy end of Morgan’s staff, “and this end for the living.” Carol (Melissa McBride) quips “Jesus, I was starting to like that guy.” Carol is all of us.

Ambushed – As Rick’s army trudges onward, they spot the most massive herd of walkers ever seen roaming in the distance. Luckily it isn’t near them yet. Unluckily, The Saviors are nearby and their whistles echo through the field. “I ambushed your ambush with an even bigger ambush!” roars the poet Negan over a megaphone. The Saviors swarm around the Hilltop crew and Negan digs the knife in further by mentioning Rick’s “friends” he has with him. That includes the bullet maker Eugene, failed double agent Dwight (Austin Amelio), and Gabriel, who now has a gun at his head. Negan starts a countdown until murder time, but when he reaches “one” the unthinkable happens. Every single Savior gun backfires and either kills or maims the Savior holding it. Eugene finally did something useful! Negan tries to kill him for the double-cross, but Gabriel and Dwight fight off the big bad. With the Saviors crippled, Rick and company charge in and start cutting down the enemy.

Defending Hilltop – As a Savior truck arrives at Hilltop, Tara (Alanna Masterson) quickly evacuates the community. Except for Gregory who is kept locked up: “they can have him” she shrugs. Truth. Realizing that Judith’s cries will lead the enemy to her people, Tara volunteers to stay behind and hold of The Saviors. In a show of faith, Alden (Callan McAuliffe) stays behind with his men to aid her. As the enemy forces draw close, they are suddenly eviscerated by a barrage of molotov cocktails. Tossing the deadly weapons are none other than the women of Hilltop, lead by Aaron (Ross Marquand).

SEE Is ‘The Walking Dead’ about to skip years of comic book stories with Georgie?

Defeat – Regina order her unit to kill Eugene for his betrayal. But she and her men are gunned down by Rosita (Christian Serratos) before they can get to him. With no functioning guns and suffering losses, The Saviors are helpless. Laura begs Rick not to shoot, “it’s done.” She sinks to her knees in surrender and the rest of her people follow suit. The war is won. Though Rick runs off to fry bigger fish.

Rick vs. Negan – Rick chases Negan to a tree with stained glass windows hanging from its limbs. It’s the one seen in the previous flash-forwards, but we get zero explanation as to why someone hung stained glass windows there. The two enemies brawl and Rick is eventually downed by a hit from Lucille to the gut. Relishing the moment, Negan confesses that the “eeny meeny miney moe” lineup was a farce. He made a choice about who he was going to kill, and didn’t kill Rick then to spare a son from watching his father die. Rick uses the mention of Carl to beg for “ten seconds” before Negan kills him. He explains that Carl believed they didn’t need to fight, that there could be harmony. “He was wrong” growls an advancing Negan. But before the brute can swing Lucille, Rick quickly slashes his throat with a portion of glass from the window.

“Save Him” – Before anyone can start the first chorus of “Ding Dong the Witch is Dead,” Rick sees the same flashback of him and Carl and orders Siddiq to save Negan. Viewers are confused about how this is possible, and Maggie is furious it’s even an option. She has to be held back as she cries and rages. “He killed Glenn” she screams. “It’s not over until he’s dead! We have it make it right.” But Rick turns to his people and The Saviors and cites a familiar refrain: “There’s gotta be something after.” Pointing out that the massive herd of undead could be coming for them, he preaches about surviving the horrors together. Relieved that he could follow through with his son’s wishes he brings the season full circle by speaking the mantra “my mercy prevails over my wrath.”

Aftermath – After the battle, the survivors set off to start a new life working together as allies. Rosita appears to forgive Eugene after he single handedly saved everyone. Though she does clock him across the jaw for vomiting on her. Carol returns to live at The Kingdom and looks happy for the first time in ages. Tara heads to The Sanctuary to help the Saviors rebuild. And Alden offers to stay at the Hilltop so he can help Maggie build some of the structures in her “Key to the Future” book.

Dwight Released – It looks like Dwight might not have such a happy ending when Daryl (Norman Reedus) drives him to the middle of the woods. Facing down his sins, the battered Dwight tears up. “I knew I’d have to face you. To pay.” But instead of killing him, Daryl tosses him some car keys. “You go an you keep going” Daryl barks. “If I ever see you around here again, I’ll kill you.” The first place Dwight heads to is the house he once inhabited with Sherry. Perhaps ol’ scarface will drive off into the sunset, but given how many mentions Sherry received this season, it’s a safe bet their reunion will figure into next season.

Alone – Morgan knocks on Jadis’ (Pollyanna McIntosh) door at the junkyard and mentions that Rick invited her to join the community. “You don’t want to be alone” he says, “everything is about people.” Since the two characters have never spoken before, she introduces herself with her true name, Anne. Morgan isn’t joining her however, just taking her place in the junkyard so he can be alone. Didn’t he just tell her no one should be alone? This is the last we will see of Morgan on the main series, since the Season 4 premiere of “Fear the Walking Dead” revealed that the character travels to Texas to join the spinoff cast. But Morgan traveled on foot, meaning that helicopter is still out there somewhere.

Civil War – Rick and Michonne (Danai Gurira) wake a recovering Negan to inform him of his fate. He will be kept in a jail cell in Alexandria for the rest of his life, so he can see how the new world will prosper and how wrong he was about human nature. Over at Hilltop, Maggie is not pleased with this plan. In a meeting with Jesus and Daryl, she admits that it was a good decision to keep the Savior prisoners alive. “Rick was right. But not about Negan.” She plans to bide her time, making her community prosper, before she shows Rick and Michonne the error of their ways. In other words, next season Maggie is Iron Man and Rick is Captain America.

Rick’s Letter – In a touching coda, Rick closes the episode with a response letter to his son. “Dear Carl, I remember. I forgot who I was. You made me remember. You showed me the new world. I see it.” With Negan still alive and Maggie out for blood, how long Rick’s new world will last is anyone’s guess. We’ll find out in Season 9 this fall!