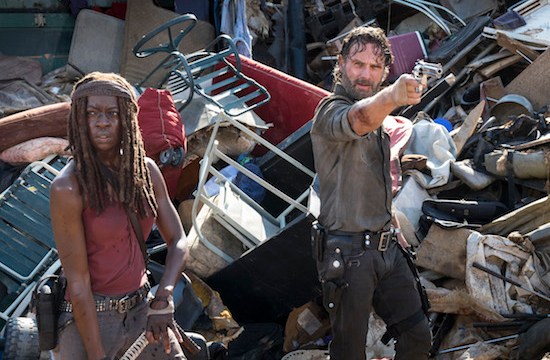 Viewers might have thought the heroes of “The Walking Dead” were done suffering for a while after the death of Carl (Chandler Riggs) last week. But in “The Lost and the Plunderers,” suffering and sorrow cling to Rick (Andrew Lincoln) like a virus, and a showdown with The Saviors looms in the distance. These are the game changing moments from Season 8 episode 10.

Goodbye Alexandria – Rick and Michonne (Danai Gurira) finish Carl’s grave and pack up a car. Alexandria lies in ruins and walkers roam the streets, pouring in through blast holes in the walls and gate. Michonne delays their escape by trying in vain to extinguish a fire at the gazebo. Carl “used to play on the roof” she reminisces. But swarming undead force them to flee. The hopeful welcome sign mocks them as they drive away and provides the source for this hour’s title: “Welcome to the Alexandria Safe Zone. Mercy for the Lost. Vengeance for the Plunderers.”

Moving Forward – “What do you think he meant?” Rick asks as he pulls the car over. He ponders his son’s final words, “Did he want us to stop fighting? To surrender to the Saviors?” Michonne delicately suggests that Carl desired peace and also reveals that he wrote goodbye letters to them all. Rick can’t bring himself to read his letter, but is stunned to find one addressed to Negan (Jeffrey Dean Morgan). Burying his emotions over the letters, Rick decides they have to warn Jadis (Pollyanna McIntosh) and the Scavengers. Her group is still an important resource in the war and The Saviors will be coming for them.

Negan – A title card flashes across the screen that reads “Negan” (the first of three such cards this episode). The Big Bad confesses to Simon (Steven Ogg) that Gavin won’t respond to his walkie. And he’s right to be worried. But Simon is only focused on massacring the Scavengers for uniting with Rick. This leads to a shouting match with Negan who forbids Simon from murdering them all. He commands Simon to kill just one (“the usual”) to remind them of their deal with The Saviors and retain the junkyard gang as a resource. Further enraging Simon is the discovery of the Savior that Maggie killed and shoved in a coffin. This dead man and her other hostages are all from Simon’s squad.

Oceanside – Aaron (Ross Marquand) and Enid (Katelyn Nacon) continue their truly disastrous outreach mission at Oceanside. Chained to a radiator for murdering Natania, most of the group wants to drown the duo in the ocean. Luckily Cyndie (Sydney Park), who has inherited the leadership role, decides to spare them at the last minute provided they never return. “Stop killing strangers” Enid implores her, “we know the difference between friends and enemies. You should too.” For reasons beyond comprehension, Aaron still thinks he bring the women of Oceanside around. He makes Enid leave for Hilltop while he stays behind to convince them. He didn’t even deliver a convincing speech like Enid so I’m not confident in his odds of success, but good luck Aaron.

Simon Goes Rogue – Simon storms the junkyard with his men, demanding an apology from Jadis. The trash queen attempts to spin her appearance with Rick as a positive (“Delivered him. To you”), but Simon doesn’t buy it. He demands all their guns as punishment for the betrayal and the Scavengers hand over their weapons to avoid conflict.  Simon stops short of leaving, confessing that he doesn’t feel remorse from Jadis. She stoically replies that there is remorse, but Simon shoots Brion for her lackluster apology. Jadis is rattled and repeats her apology, only for Simon to kill Tamiel next. The murders sends Jadis into a rage and she knocks Simon to the ground. With an evil glint in his eye, Simon orders his men to “light it up.” Jadis watches in horror as her unarmed group is mowed down in a hail of bullets.

Jadis Alone – Rick and Michonne arrive at the Junkyard too late. They set off a trap which sends an avalanche of garbage crashing to the ground, blocking the entrance. The zombified Scavengers descend on the pair, who scamper up a garbage heap to safety. They discover Jadis at the top, weeping over the death of group. Rick decides to make a run for the exit and leave Jadis behind, since she no longer can provide guns or soldiers. He and Michonne carve a path to the exit, and Jadis begs rick to let her escape. He refuses, firing a warning shot past her head and sending the disgraced leader fleeing from the jaws of surrounding walkers.

Meat Grinder – Jadis eventually lures her zombified friends to a large meat grinder in the junkyard. She sits by the controls, a pit with large spinning blades separates her from the zombies. Tears stream down her face as she watches the family she created walk one by one into the grinder. The hungry walkers are churned into piles of meat which fall onto a conveyor belt below, splashing Jadis’ nearby painting. We’ve never seen Jadis so vulnerable or broken. Will she avenge her people after the heartless actions of Simon and Rick?

“You Failed” – Back at the car, Rick convinces himself that he saw Jadis survive the zombie hoard and Michonne suggests that finding a way to coexist with her might be the type of peace Carl was talking about. Rick takes out his son’s letters and chooses to read the one addressed to Negan. The letter enrages him and he walkies for the villain. Rick confesses to Negan that Carl is dead, but defies his son’s wish for peace by promising to kill Negan. The Saviors leader is genuinely sorry to hear of Carl’s passing, but pokes Rick’s wound by claiming “Carl died because of you. You set this course.” The fire in Rick is silenced as Negan continues “You failed as a leader. And most of all you failed as a father. Give up. Just give up because you have already lost.” With Rick’s son gone and his forces decimated, Negan has a point.

'The Walking Dead' episode 12 preview trailer: 'Walk With Us' spells doom for residents of Hilltop…

'The Walking Dead' seasons ranked worst to best: Does your personal #1 choice match ours?

'The Walking Dead' episode 11 recap: Top 5 moments from 'Morning Star' include a fiery assault on…

'The Walking Dead' episode 10 recap: Top 5 most tense moments from 'Stalker' include a deadly presence…