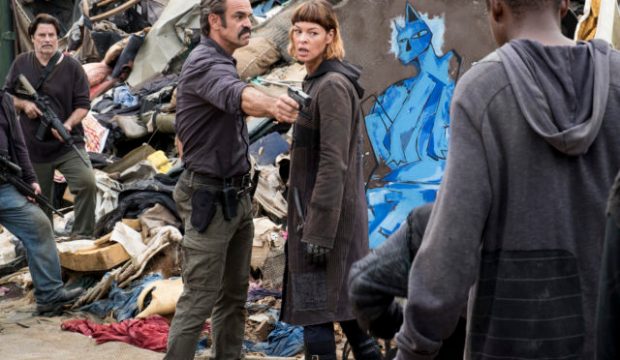 The latest episode of “The Walking Dead” may have centered its attention on Rick’s (Andrew Lincoln) grief, but the storyline surrounding Jadis (Pollyanna McIntosh) may have deadly ramifications in the future. Will Jadis become the next major villain of the series? Take a look at the evidence and let us know in the poll below. Warning: Spoilers are abound for “The Walking Dead” TV series and comic books.

Jadis, the queen of the junkyard Scavengers, had a rough go of it in “The Lost and the Plunderers.” Her constant double crossing came back to bite her when Simon (Steven Ogg) paid her tribe a visit. Enraged that Jadis reneged on a deal with The Saviors, Simon and his men slaughter all the Scavengers while Jadis is forced to watch.

Rick and Michonne (Danai Gurira) arrive at the junkyard to find Jadis broken and alone. The sole survivor. But instead of letting her flee the clutches of her now zombified friends, Rick blocks her exit and leaves her to die. Harsh? Sure. But we should remember that if Hilltop and The Kingdom hadn’t shown up during the first attack on Alexandria, the entire town would have been wiped out thanks to Jadis’ betrayal of Rick.

Jadis’ demeanor in the rest of the episode hints that Rick may not have made the right decision however. She grinds up all her undead friends in giant thresher and watches as they are ripped apart one by one. It’s obvious that this traumatic loss has broken her. Something has cracked. The show could simply leave her storyline, letting the audience assume she wasted away by herself in the junkyard. But what if the actions of Simon and Rick just created the next Big Bad of the series?

Speculation has run rampant that Jadis and The Scavengers would turn into the fearsome group from the comics called The Whisperers. For the uninitiated, The Whisperers are a clan that lives among the walkers by wearing zombie skin suits. They are lead by a terrifying woman called Alpha. Fan theories suggest that since Jadis and her people do not appear in the source material, the show was setting them up to transform into The Whisperers.

While it’s true that the junkyard gang bit the dust, there is a time jump in the comics after the All Out War storyline. If the AMC series utilizes the same device it would give Jadis plenty of time to round up survivors and create a brand new society. One where she dons a new name, makes her people disguise themselves as the undead, and sets out to kill the people that wronged her.

Since Carl (Chandler Riggs) figures heavily into the introduction of The Whisperers in the comics, any TV plot with this group would have to be adjusted given his recent death on the show. Reworking Alpha’s story arc as a revenge plot for Jadis would be dramatically compelling. And instead of random villains strolling onto the scene with no connection to our heroes, Alpha would become a massive threat created by Rick’s actions. Specifically: his inability to heed his son’s dying wish to find peace with his adversaries.