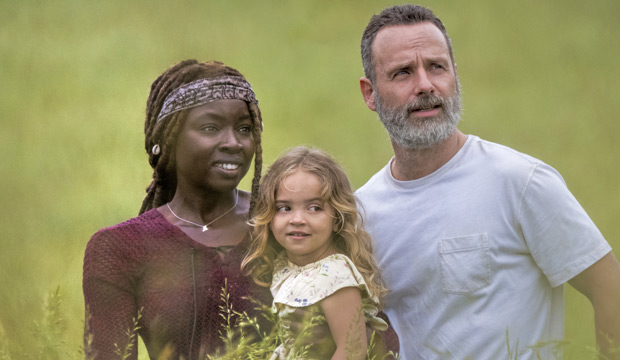 “The Walking Dead” began its ninth season with a supersized premiere episode on Sunday, October 7. AMC has touted that the first half of this season will contain the last episodes with Rick Grimes, as Andrew Lincoln is departing the series. This installment proved there’s plenty of adventure and drama in store for Rick before he goes. There is a sense of unsettlement lurking underneath the fragile peace Rick established last season. It results in love and community building, but also power grabs and deaths. These are the Top 5 most shocking moments from the Season 9 premiere, titled “A New Beginning.”

Time Jump
Season 9 begins with a year-and-a-half jump into the future from where we left the story in Season 8. Alexandria has been rebuilt. Rick’s beard if graying. Judith is old enough to talk and paints a touching family portrait on the porch which includes her fallen brother Carl. Maggie (Lauren Cohan) won an election against Gregory (Xander Berkeley) to become the leader of Hilltop. She has also given birth to a boy, which she names after her father Hershel.

SEE ‘The Walking Dead’ boss on Andrew Lincoln leaving: ‘We’re all sad about it,’ but we have ‘an ensemble cast’

Then Comes Marriage
Based on intel from Jadis, now using her real name Anne (Pollyanna McIntosh), a group heads to a museum of natural history to pick up supplies. They gather packets of seeds and steal a canoe, plow and covered wagon from the museum displays. As they haul the heavy items across a fractured glass walkway, the floor shatters and leaves Ezekiel (Khary Payton) dangling by a rope above a pack of zombies. He is pulled to safety in the nick of time and shares his first on-screen kiss with a relieved Carol (Melissa McBride). The close call prompts Ezekiel to propose to Carol on the ride home. The two are giddily in love, but Carol wants to wait until she feels ready. “And this is not happening on a horse,” she adds.

“Ken has Died of a Walker-bite”
The herd spotted last season has merged with two other groups of walkers, and the massive horde has taken out a bridge on the path home. The group diverts to an alternate route, but the covered wagon gets stuck in a patch of mud. Clearly, none of these survivors played “The Oregon Trail” before society fell since they foolishly attempt to pull their heavy loot through the mess. Walkers soon emerge from the woods and overwhelm the group. They are forced to flee, but kind-hearted Ken (AJ Achinger) runs back to free a horse tied to the wagon. A walker takes a chunk out of Ken’s arm as he sets the horse free, and the man soon succumbs to the bite and dies. Well Ken, at least you had a quicker death than suffering through diphtheria or dysentery.

Negan Persists
Daryl (Norman Reedus) has been tasked with overseeing The Sanctuary, and he is not pleased with the job Rick has assigned him. He feels cut off from the friends who have become family to him and longs for a smaller group like at the start of the outbreak. With everyone spread out, the biker laments that “there is no ‘us’ anymore.” Though Carol ultimately volunteers to take the position from Daryl, trouble looms as a disturbing graffiti is spotted on a wall proclaiming, “We are still Negan.” The villain is safely locked up at Alexandria, but it seems that not all of The Saviors are ready to kumbaya with Rick’s people.

Execution
Gregory is bitter about losing the Hilltop election and poisons Ken’s parents against Maggie. While she walks Hershel Jr. one night, Gregory informs her that someone has defaced Glenn’s grave. But Ken’s father is waiting for her at the graveyard and slashes at her face with a knife. After Alden and Enid come to her rescue, Maggie storms into Gregory’s room in a rage. “You want to lead this place, but you can’t even murder someone right,” she barks. Gregory comes at her with a knife, but she overpowers him. Intent on cementing herself as a strong leader for Hilltop, she refuses Rick’s request for help with the bridge the following day. To Rick’s further horror, and with her whole community looking on, she sentences Gregory to death for his crimes. The weasel is hanged in Hilltop’s courtyard and Maggie is the new queen of the apocalypse.