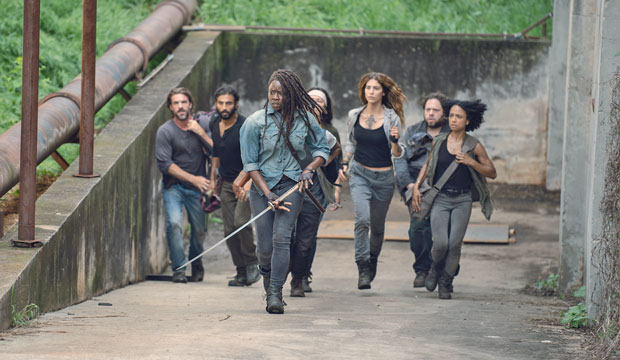 When Andrew Lincoln decided to leave AMC’s “The Walking Dead” to star in his own series of Rick Grimes original films, the show responded by jumping forward in time a whopping six years. Unfortunately, not everyone is loving the new direction. Only 29% of “TWD” fans who voted in our recent poll admitted that they think the new Rick-less timeline is “great.” Conversely, 19% of people said that it’s “not cool” because they “miss the old timeline.” The remaining voters are all sitting in the middle, with 52% declaring they’re waiting to see “how it all plays out.” Give us your thoughts on this hot topic down in the comments section.

In the new future setting, the biggest character change is that Rick’s daughter Judith (Cailey Fleming) is now 10 years old and calling the shots at Alexandria alongside Michonne (Danai Gurira). Much like her deceased older brother Carl (Chandler Riggs), Judith now wears Rick’s old sheriff’s hat as she tries to teach people about hope and optimism in a world filled with zombies and evil.

Several other characters have also evolved in the looks department, with Carol (Melissa McBride) now donning long white hair to match that of her new husband King Ezekiel (Khary Payton). And Aaron (Ross Marquand) now wears a metal prosthetic arm, the results of Enid (Katelyn Nacon) amputating his arm six years prior when a log pinned him down.

SEE‘The Walking Dead’ episode 6 recap: Top 5 most shocking moments from ‘Who Are You Now?’ include a dangerous new enemy

Speaking of Carol and Ezekial, they’re now the adoptive parents Henry (Matt Lintz), an orphan boy who wants to prove his worth by becoming a blacksmith. Because Carol still has serious trust issues, there’s only one person in this new timeline that she wants to watch after her boy: her longtime ally Daryl (Norman Reedus).

Of course, what would the new timeline be without a little love? Father Gabriel (Seth Gilliam) and Rosita (Christian Serratos) rarely interacted in the past, but after six years together they’re now a fully fledged romantic couple. Eugene (Josh McDermitt), who’s now badass walker killer, also has a bit of a crush on Rosita. Will Eugene profess his love for Rosita in this Sunday’s mid-season finale?