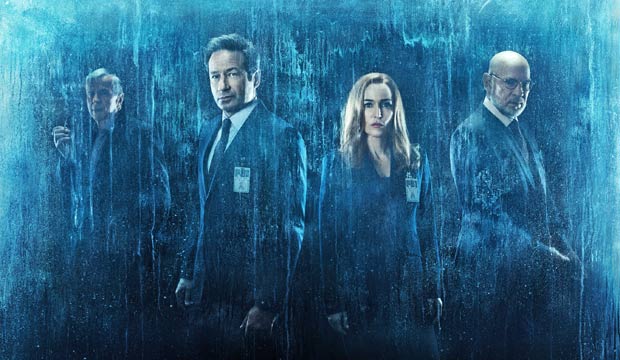 The. X. Files. Is. Back. After two long years, fans of Fox’s “The X-Files” finally got answers to last season’s questions when the show returned Wednesday night with an episode titled “My Struggle III,” written and directed by creator Chris Carter. How did FBI Agents Fox Mulder (David Duchovny) and Dana Scully (Gillian Anderson) survive the outbreak of the Spartan Virus that threatened to end humanity, and what happened when Scully and Agent Miller (Robbie Amell) came face-to-face with a UFO? The answer to both questions is a plot twist no one saw coming: It was — hrumph — all a dream.

As fans continue to debate the re-writing of last season’s finale as nothing more than Scully’s apocalyptic vision, let’s take a moment to appreciate our favorite scenes from Season 11, Episode 1. Check out our Top 4 moments below, and then be sure to sound off on YOUR favorite picks down in the comments section.

Smoking Man and Scully, sitting in a tree — In one of “The X-Files'” most shocking twists of all time, we find out that Mulder is not the father of Scully’s child William. Instead, the real daddy is the Cigarette-Smoking Man (William B. Davis). Cue the screams of horror from X-Philes worldwide. Sure, there were hints that CSM had an infatuation with Scully — as seen in flashbacks to the adulterous Season 7 episode “En Ami” — but no one predicted that it meant Old Smokey actually impregnated her with what he called “the first superhuman child.”

Mulder vs. Skinner — After learning that the Smoking Man is really William’s father, Assistant Director Walter Skinner (Mitch Pileggi) starts acting weird around Mulder and Scully. Mulder’s spidey senses go up, and when he asks the Skin-man where he’d been, Skinner averts his eyes and tells him, “Leave it alone.” Mulder resplies by rasping, “You smell like smoke.” The two men then have a knock-out, drag-out fight in the middle of Scully’s hospital hallway, reminiscent of a former Mulder/Skinner face-off from Season 2’s “Anasazi.”

Spender is back … with hair — Jeffrey Spender (Chris Owens), Mulder’s half-brother and CSM’s son, hasn’t been seen since the Season 9 finale “The Truth,” when his entire body was covered in burns from forced experiments and he was wearing a wig. Over the past 16 years, not only has Spender been keeping William’s location a secret at the request of Scully, but he was also able to grow back his normal hair. Thanks Rogaine!

Scully’s visions — Throughout the episode, Scully has several visions of the apocalyptic future from last season’s finale, intermixed with new images of William. The last time Scully saw her son was in the Season 9 episode “William,” when she gave her baby up for adoption. Scully is soon made to understand that her visions are not hers, but actually William’s. Viewers also see scattered images of a present-day William, and hey, doesn’t he look a bit like a teenage Freddie Highmore?