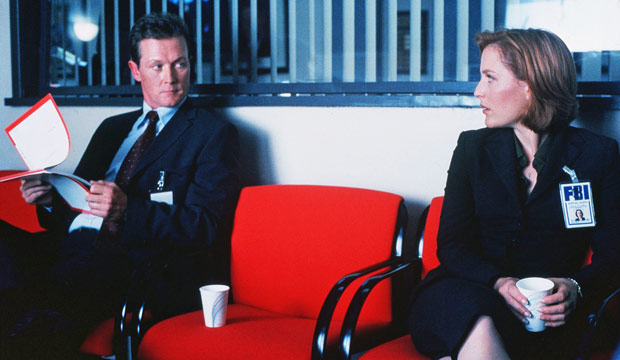 “I know we tried to get Robert Patrick a couple times,” confirmed “The X-Files” executive producer Glen Morgan at the Television Critics Association winter press tour about Fox’s current revival of the classic sci-fi series. However, Patrick’s day job on CBS’s “Scorpion” made him unavailable to shoot any new episodes for “The X-Files” Season 11. “We’ve tried, but it was just a scheduling issue,” Morgan said.

Patrick’s John Doggett was cast in “The X-Files” Season 8 as way to fill the gap left by the departing David Duchovny, who tired of playing Fox Mulder after seven long years. Doggett and Gillian Anderson‘s Dana Scully had a uniquely professional rapport for Season 8, and then Season 9 changed the dynamic again when Annabeth Gish joined the cast as Monica Reyes, Doggett’s full-time partner. Gish returned for the 10th season revival and then again in the Season 11 premiere, along with former cast members Duchovny, Anderson, Mitch Pileggi (Walter Skinner), William B. Davis (Cigarette-Smoking Man) and Chris Owens (Jeffrey Spender).

SEE ‘The X-Files’ spoilers: ‘Home’ actress Karin Konoval comes out from under the bed in new Season 11 role(s)

When speaking of the family atmosphere of “The X-Files,” Morgan added about Patrick, “He did an episode [that I wrote] of this show at Amazon, ‘Lore,’ and I hadn’t met him. It was like weird to have a kind of family connection and I had never met him. I just think the world of him.”

At Fox’s TCA panel, Morgan was joined by fellow executive producers James Wong and Darin Morgan, as well as cast members Duchovny, Anderson and Pileggi. Anderson confirmed that Season 11 is most definitely her final hurrah on “The X-Files,” ruling out any possibilities of returning at a future date. Read our Top 4 moments from “The X-Files” premiere, and then watch our editors’ video recap.