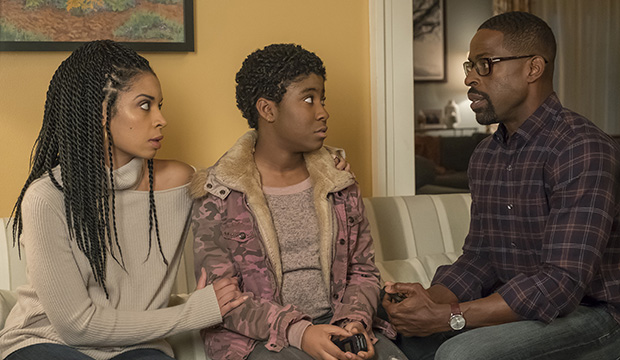 Of the 10 Emmy nominations “This Is Us” received last year, seven of them were for acting. If that wasn’t enough evidence that actors love the tearjerker, the cast pulled off an upset at the Screen Actors Guild Awards, grabbing drama ensemble honors. If that love sustains and grows, how many acting nominations could the series nab this year?

SEE Emmys exclusive: 20th Century Fox Television categories for ‘This Is Us,’ ‘The Orville’ and more

Only two of last year’s nominees aren’t eligible: guest actor nominees Brian Tyree Henry and Denis O’Hare. But our readers believe Mandy Moore and Justin Hartley, the two main Pearsons who were snubbed last year, will for sure get in this year in drama lead actress and drama supporting actor, respectively, to join reigning drama actor champ Sterling K. Brown, Milo Ventimiglia and Chrissy Metz. Hartley, in particular, got a boon when “Westworld” stars Jeffrey Wright and Ed Harris shifted to lead and his co-star Ron Cephas Jones, who was nominated in supporting last year, moved to guest.

Outside of the main five actors and Jones, “This Is Us” is entering 17 other performers, including defending drama guest actor winner Gerald McRaney, who returned in Season 2 to give a pep talk to Rebecca (Moore) this time. Other notable names include Sylvester Stallone, who made a cameo as himself, Lena Waithe, Kate Burton, Elizabeth Perkins, Debra Jo Rupp and Pam Grier.

SEE Mandy Moore (‘This Is Us’): Super Bowl episode was so ‘traumatic’ [EXCLUSIVE VIDEO INTERVIEW]

Our odds currently have eight actors making the cut: Moore, Brown, Ventimiglia, Metz, Hartley, Grier, McRaney and Jones. Is eight enough? Too many? Too few? Shows tend to increase in nominations their second year after a good inaugural Emmy season, as buzz and interest grows — “This Is Us” certainly had that in Season 2 as it revealed how Jack (Ventimiglia) died — and more voters discover it.

Check out “This Is Us”’ 23 actor entries below. How many do you think will get nominations?