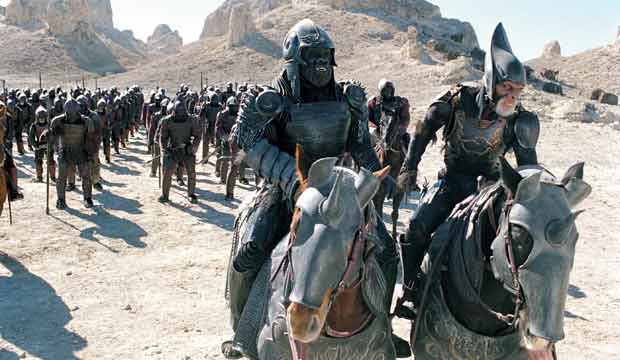 Tim Burton celebrates his 60th birthday on August 25. In his 30-plus year career, the director has carved out a niche for himself making quirky, eccentric films that are often box office bonanzas. In honor of his birthday, let’s take a look back at all 18 of his films, ranked from worst to best, in the photo gallery above.

Burton began his career as an animator for Walt Disney Studios before making the short films “Vincent” (1982) and “Frankenweenie” (1984). He directed his first feature when he was just 26 years old: “Pee-wee’s Big Adventure” (1985). Burton followed that success with the macabre comedy “Beetlejuice” (1988) before entering the world of blockbusters with the dark, ominous superhero adventure “Batman” (1989).

From the beginning, Burton displayed a talent for crafting visually stunning worlds unlike any seen before. Four of his films, in fact — “Batman,” “Sleepy Hollow,” “Sweeney Todd,” and “Alice in Wonderland” — have won Oscars for their art direction.

Burton often returned to his animation roots, first as a producer on “The Nightmare Before Christmas” (1993). He scored Oscar nominations in Best Animated Feature for directing the stop-motion films “Corpse Bride” (2005) and “Frankenweenie” (2012). Surprisingly, those are his only two bids to date, despite helming such critical darlings as “Ed Wood” (1994), “Big Fish” (2003), and “Sweeney Todd: The Demon Barber of Fleet Street” (2007).

Currently, Burton is directing a live action adaptation of the Disney classic “Dumbo,” set for release on March 29, 2019. It stars two of his regular collaborators — Michael Keaton and Danny DeVito, but no Johnny Depp as far as we know.

18. PLANET OF THE APES (2001)
Before the “Planet of the Apes” was rebooted to great acclaim with Andy Serkis, Burton took a swing at bringing the campy sci-fi franchise into the new millennium with state-of-the-art makeup and visual effects. Yet all the Rick Baker makeup in the world can’t elevate this dreary retread. Mark Wahlberg is at his least charismatic as an astronaut who crash lands on a planet inhabited entirely by talking apes who have turned humans into slaves.

17. DARK SHADOWS (2012)
In adapting Dan Curtis’ horror soap opera to the big screen, Burton mounts a typically stylish production. Unfortunately, the plot can’t match the visuals. Johnny Depp plays Barnabas Collins, who in the 1700s is turned into a vampire when he spurns the love of a witch (Eva Green). He returns to his gothic mansion in the 1970s to save his family name and fight off the witch’s lingering romantic advancements.

16. MISS PEREGRINE’S HOME FOR PECULIAR CHILDREN (2016)
This movie feels like Burton on autopilot: great to look at, but not much else. Its story about a school for children with special powers run by the loving Miss Peregrine (Eva Green) is the sort of thing the director could do in his sleep, and watching the film, it almost feels like he did.

15. ALICE IN WONDERLAND (2010)
Burton is nothing if not a master of creating imaginative worlds, and the wonderland of Lewis Carroll’s beloved book should be an ideal playground for the director. Indeed, the Oscar-winning production design by Robert Stromberg and costumes by Colleen Atwood are the best thing about this chaotic and overblown adaptation. This version finds Alice (Mia Wasikowska) returning to Wonderland to do battle with the evil Red Queen (Helena Bonham Carter) with the help of the Mad Hatter (Johnny Depp) and friends.

14. CHARLIE AND THE CHOCOLATE FACTORY (2005)
Though it’s hard to compete with the Gene Wilder musical, Burton does a good job putting his own spin on Roald Dahl’s children’s book. Freddie Highmore plays Charlie Bucket, a poor young boy who finds a golden ticket in a candy bar, winning him a trip to Willy Wonka’s (Johnny Depp) world famous chocolate factory.

13. MARS ATTACKS! (1996)
“Mars Attacks!” is Burton at his most playful, a loving tribute to the kind of sci-fi cheese-o-ramas that used to play on the second half of a double bill. Based on a popular trading card series, the film imagines what would happen if a fleet of big-brained, screech-voiced aliens decided to visit Earth.

11. BIG EYES (2014)
“Big Eyes” finds Burton reuniting with his “Ed Wood” screenwriters Scott Alexander and Larry Karaszewski for another oddball biopic. Amy Adams won a Golden Globe for playing Margaret Keane, a painter best known for her portraits of big-eyed waifs. Christoph Waltz costars as her husband, Walter Keane, a mediocre artist who convinces Margaret to let him take credit for her work, since no one in 1950s America would want to buy art from a “lady painter.”

10. FRANKENWEENIE (2012)
Burton returned to his roots with this black-and-white, stop-motion animated adaptation of one of his earliest short films. “Frankenweenie” centers on a young boy named Victor Frankenstein (voiced by Charlie Tahan) who brings his beloved dog Sparky back to life after he passes away suddenly. But Victor can’t keep his creation a secret for too long.

9. PEE-WEE’S BIG ADVENTURE (1985)
Burton made his feature directing debut with this deliriously loopy big-screen adaptation of Paul Reubens’ popular Pee-wee Herman character. When the eccentric man-child’s beloved red bike is stolen in broad daylight, he sets out across the U.S. to find it, leading to the adventure of a lifetime.

8. BIG FISH (2003)
“Big Fish” finds Burton dipping his toes into a more sentimental mode of filmmaking. Luckily, he loses none of his quirk when making us weep. Based on the book by Daniel Wallace, it tells the story of a young man (Billy Crudup) who returns to his Alabama home to be with his ailing father (Albert Finney), a former traveling salesman with a gift for telling tall tales.

7. CORPSE BRIDE (2005)
After finding success in the live action realm, Burton dipped his toes back into cartoons with this macabre romance about a skittish groom (voiced by Johnny Depp) who finds himself married to a murdered young woman (Helena Bonham Carter) after he inadvertently practices his wedding vows in front of her.

6. SWEENEY TODD: THE DEMON BARBER OF FLEET STREET (2007)
With its gruesome subject matter and complicated lyrical compositions, this project would be a challenge for any director. Thankfully, Burton makes Stephen Sondheim and Hugh Wheeler’s landmark stage show into one of the great modern movie musicals. Johnny Depp plays Benjamin Barker, aka Sweeney Todd, a barber who murders his customers with a straight razor and helps his landlady, Mrs. Lovett (Helena Bonham Carter), turn them into meat pies.

5. BEETLEJUICE (1988)
After early success, Burton was let loose with this wildly entertaining ghost story. Alec Baldwin and Geena Davis play a young married couple who are killed in a freak accident. They return as spirits to find an obnoxious new family occupying their home. Desperate to kick them out, they enlist a sleazy demon named Beetlejuice (Michael Keaton) to scare them away.

4. BATMAN (1989)
With “Batman,” Burton brought the caped crusader back to the film noir roots of Bob Kane’s comic books after the 1960s Adam West TV show mired it in camp. In so doing, he helped bring the superhero movie into darker and more mature territory. Michael Keaton plays Bruce Wayne, a billionaire vigilante who dons a black mask to fight crime. Jack Nicholson steals the show as the Joker, a maniacal, clown-faced madman terrorizing Gotham City.

3. EDWARD SCISSORHANDS (1990)
Of all the oddball loners in Burton’s filmography, none is more empathetic than this pale-faced goth boy with sharp iron shears for fingers. Johnny Depp began his long association with the director playing the title character, a shy, sensitive young man with scissors for hands. Abandoned in a gothic tower, he is brought down to suburbia by the friendly Avon Lady (Dianne Wiest) and quickly falls in love with her beautiful daughter (Winona Ryder).

2. BATMAN RETURNS (1992)
The laws of Hollywood dictate that every successful film be given a sequel, and thus “Batman Returns” was born. Yet rather than producing a standard retread of the original, Burton opted to go weirder and darker with the followup, creating a grim, disturbing film that divided critics and disappointed audiences when it was first released. Time has rendered a different verdict. Part two finds the caped crusader (Michael Keaton) doing battle with a pair of deeply deranged weirdos — the Penguin (a gleefully repugnant Danny DeVito) and Catwoman (a scene-stealing Michelle Pfeiffer).

1. ED WOOD (1994)
Who would’ve guessed that a biopic about the worst director of all time would be the highlight of another filmmaker’s career? Yet “Ed Wood” remains the most entertaining and moving entry in Burton’s filmography. Johnny Depp stars as Edward D. Wood Jr., the miraculously untalented auteur behind such z-list classics as “Plan 9 for Outer Space” and “Glen or Glenda” (in which Wood, a famous transvestite, plays both title roles). Martin Landau gives the performance of his career (and has an Oscar to prove it) as washed-up, drug-addicted horror icon Bela Lugosi, who becomes a friend and muse to Wood.