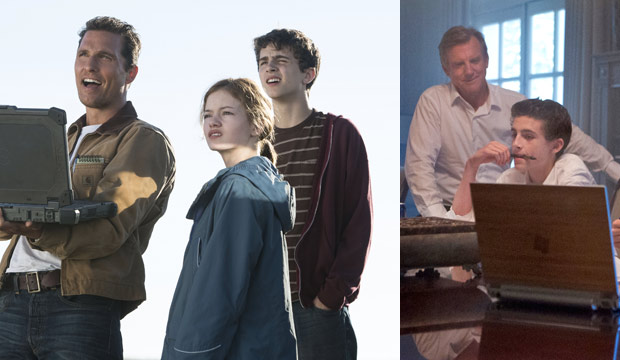 While you likely never heard of Timothee Chalamet‘s name prior to 2017, we’re willing to bet that you saw his face. The breakout actor starred in no less than four movies that were released last year — “Call Me by Your Name,” “Lady Bird,” “Hostiles” and “Hot Summer Nights” — and is now a contender to win Best Actor at the Oscars for playing gay teen Elio in “Call Me By Your Name.” Below, check out four notable projects that helped pave the way for the 22-year-old American actor to become a major awards player in 2018. Do you remember any of these performances?

“Interstellar” — In his biggest pre-“Call Me By Your Name” role, Chalamet played Tom Cooper, the 15-year-old son of Matthew McConaughey‘s astronaut character. Halfway through Christopher Nolan‘s sci-fi film, the plot gets all timey-wimey and Tom ages significantly, so Chalamet is replaced by Casey Affleck. Hey, how weird would that be if Chalamet now wins the Best Actor Oscar for “Call Me By Your Name” just one year after Affleck took home the same prize for “Manchester by the Sea”?

“Homeland” — During Season 2 of Showtime’s drama thriller, Chalamet portrayed Finn Walden, the son of Vice President William Walden (Jamey Sheridan). You’ll be forgiven if you blocked out Chalamet’s storyline, as it took place almost exclusively with Dana (Morgan Saylor), the show’s weakest character. During the Emmy-winning “Q&A” episode, Finn and Dana are on a date when he accidentally runs over a pedestrian with his car and then they — gasp — flee the scene.

“Love the Coopers” — In this 2015 Christmas comedy, Chalamet took on the role of Charlie, the grandson of Sam (John Goodman) and Charlotte (Diane Keaton) who want a divorce after forty years of marriage. The film follows four generations of Cooper hijinks, with Chalamet’s storyline involving Charlie and his childhood crush Lauren (Molly Gordon), whom he finally gets up the nerve to kiss.

“Royal Pains” — As Luke, the nephew of Jill Casey (Jill Flint), Chalamet guest-starred in four different episodes of USA’s medical dramedy: the final two of Season 3 and the first two of Season 4. Chalamet stretches his acting chops in this story arc, as Luke has a mysterious medical condition that results in his being kicked out of chess camp.