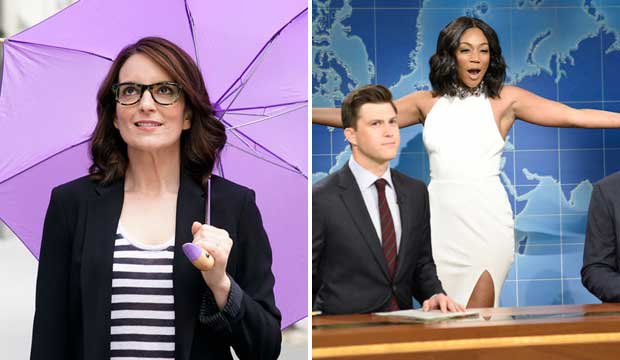 Best Comedy Guest Actress at the 2018 Emmys is a two-way race between “Saturday Night Live” guest hosts, according to our Emmy Experts. That’s not too surprising given “SNL’s” strong track record since the show’s hosts became eligible in comedy guest categories in 2009. In the last nine years “SNL” has won this category four times, including the last two in a row. So who has the edge in 2018: Tina Fey or Tiffany Haddish?

Fey has won Best Comedy Guest Actress twice for “SNL” (2009, 2016), which ties her as the most awarded actress in the category. She has nine Emmys overall as a writer, producer and actor on “SNL” and “30 Rock.” That makes her one of the TV academy’s most admired creators and performers currently working. On top of that she just earned her first Tony nomination for Best Book of a Musical for writing the Broadway adaptation of her film “Mean Girls,” which could further impress voters.

But one of the biggest stories of the season has been Haddish’s career breakthrough: acclaim and Oscar buzz for her breakthrough performance in the 2017 film “Girls Trip,” a starring role in the TBS comedy series “The Last O.G.,” hosting and winning at the MTV Movie and TV Awards, and becoming the first black female comedian ever to host “SNL.”

Do you agree with our Experts that this is a primarily two-way race between Fey and Haddish? Which of them do you think has the edge?

'The Green Knight' composer Daniel Hart: 'More research for this film than any I've ever worked on'…