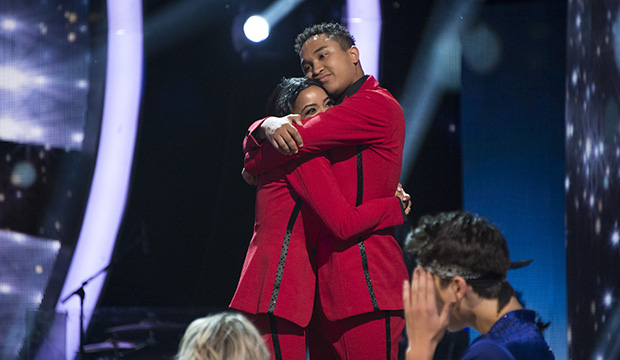 Viewers might still be in shock over Tinashe and Brandon Armstrong‘s “Dancing with the Stars” elimination on Monday, but the couple is taking it all in stride — and joking about it. “Obviously people didn’t vote! That’s what happened!” Armstrong told “Entertainment Tonight” with a laugh. “It’s OK.”

Despite a strong trio tango with Season 18 runner-up Amy Purdy that scored a 26, the singer became the fourth person — and fourth woman — to get the boot this season. Tinashe isn’t too torn up over how things went down. “I feel like we did our best every week, so that’s what’s really important,” she said. “And we had fun. It happens.”

Tinashe, who has the highest average score this season, a 25.6, along with Juan Pablo Di Pace and Milo Manheim, said the outrage over her elimination is “humbling” and “very sweet.” In hindsight, her exit seemed imminent since she was placed in jeopardy last week — which doest not mean she was in the bottom two — but being in the danger zone wasn’t enough to spur people to vote.

Still, while the fans didn’t come through for her this week, she’s grateful for getting this far, even if her time was prematurely cut short. “Thank you to everybody who did vote for us. It was really fun, honestly,” she said. “We appreciate all the support.”

And yes, she’s going to keep dancing, so maybe one day we could see her back if the show does another all-star outing. “Duh! Can’t stop us,” she said. “You can’t get us down!”