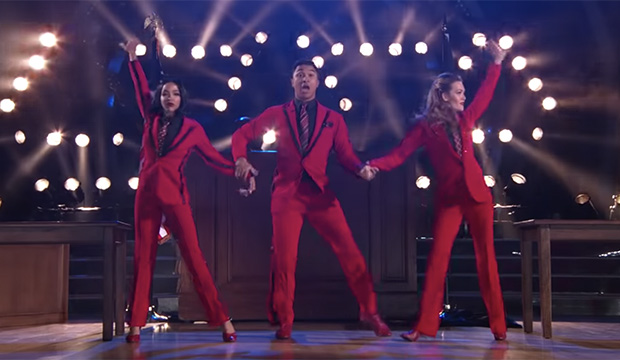 The slaughtering of female contestants on “Dancing with the Stars” this season continued on Monday, but it wasn’t Mary Lou Retton or Alexis Ren — the remaining two women who were in the bottom five the first week — who went home like we had feared. Instead, it was Tinashe, one of the best dancers and top scorers this season, and her partner Brandon Armstrong who got the boot, giving us our first shocking elimination of the season (with Bachelor Nation refusing to quit, Joe “Grocery Store Joe” Amabile might outlast a few more better dancers). How did this happen? Besides, you know, Bachelor Nation. Let’s break it down.

1. Tinashe was getting, like, no votes
This seems obvious, but it must be said. Based on skill alone and her scores — she’s tied with the highest average of the season, 25.6 — Tinashe was a contender for the Mirrorball trophy. But fan votes are the other half of the “Dancing” equation, and she had to have been at or near the bottom in terms of votes if Joe was able to overcome an 11-point deficit between them.

2. Lack of a voting fan base
This is related to the first point. With all due respect to Tinashe, she’s not exactly a household name and arguably not on the same level as past R&B singers who’ve been on the show, like Brandy and Mya. Most “Dancing” fans probably haven’t heard of her, and Tinashe’s core fan base is not the same as the “Dancing” core fan base. Some of her fans probably have never seen the show before and were watching just for her, but she needed to convert some of the regular “Dancing” viewers.

3. The “Dancing” fan base didn’t favor Tinashe
Speaking of “Dancing” fans, it’s no secret that the show’s big demographic is older women, who are more likely to pick up the phone and vote for a guy they were charmed or entertained by than young women. This is not to suggest blanket sexism or misogyny — and to be fair, the show has had an even split of male and female winners — but the voting demographic does skew toward the males. How many times have we seen underwhelming men skate by and go deep into the season while both underwhelming and superior women were eliminated early? The “worst” female contestants who made it far were Marie Osmond (Season 5) and Bristol Palin (Season 11), both of whom came in with large voting blocs and finished in third place. It’s not unlike those couple of years on OG “American Idol” when every winner was a WGWG (white guy with guitar) because of all the young women voting.

4. The revolt against ringers
“Dancing” purists will argue that no one with any dance experience of any kind should be on the show, because the show is for Average Joes and average dancers like, literally, Joe to learn how to dance. Sure, ringer types have won (see: Jennifer Grey, Nicole Scherzinger), but we’ve also had quite a few “shocking eliminations” of high-caliber dancers who — whaddya know? — just so happen to be women (see: Sabrina Bryan twice, Heather Morris).

5. She had a new pro
The popularity and fan base of a pro can go a long way in helping their partner stay on the show. How many times have we seen Derek Hough‘s fans carry a less famous or mediocre celebrity further than any other pro would’ve? Brandon, a former troupe member, acquitted himself very well in his debut season, but he was an unknown quantity to a majority of viewers, who are already familiar with veteran pros not just because they’ve already been on the show but thanks in large part to social media, which makes it feel like you know these people.

6. She didn’t have a standout dance yet
All of Tinashe’s dances were great, but she may have been too consistent for her own good. She didn’t have that spectacular one that was THE dance of the night that could’ve won over new fans. Her dances had a very similar quality to all of them, so it was easy to dismiss her like, “She’s good, she’ll be fine,” or worse, forget about her when the episode is over. This is a double-edge sword, though, because had she had a signature dance, fans could’ve also thought, “She was so good, other people will definitely vote for her,” and not vote themselves. She needed a breakthrough number that only would’ve separated her from the rest but connected with fans enough for them to vote.

7. We were warned this might happen
Tinashe’s elimination was foreshadowed last week when she was put in jeopardy alongside Nancy McKeon and Val Chmerkovskiy. “Being in jeopardy” doest not mean you’re necessarily in the bottom two — the only time this season we’ve known the bottom pack was in the first week when they explicitly announced the bottom six and subsequently the bottom five, which were all women. So Tinashe may or may not have been second from the bottom last week, but the show often puts couples “in jeopardy” to scare/encourage fans to vote and sometimes as a wake-up call to the couples themselves to step it up (on the other end of the spectrum, producers likely have not put Joe “in jeopardy” yet because they don’t want to encourage Bachelor Nation to vote even more). It was definitely the former in Tinashe’s case, but clearly that did not light a fire under anyone to vote for her last week (now that we’re back to one show a week, votes from the previous week are combined with the current week’s scores).