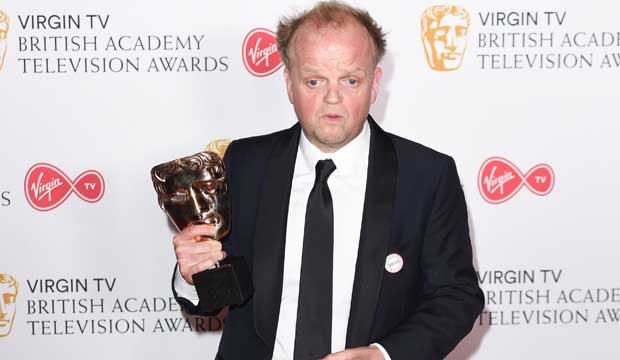 Toby Jones is on this year’s Emmy ballot for his BAFTA-winning performance in the low-key comedy “Detectorists” as a would-be treasure hunter. Thanks to Acorn TV, the third and final season of this hit Britcom is eligible for Emmy consideration. The US-based streaming service co-produced the last six episodes of this delightful slice-of-life created by “The Office” star Mackenzie Crook. He wrote and directed every episode and stars as the archaeologist Andy who spends his free time with his pal Lance (Toby Jones) in search of buried treasure.

Jones was delighted to have won his first BAFTA for a show so close to his heart. “This is just the most wonderful, chilled out job ever,” he readily admitted.  And he loves that his career takes him from this intimate television project to the likes of the upcoming “Jurassic World: Fallen Kingdom,” in which he has a key role.

SEE Emmys spotlight: ‘Detectorists’ is a comedy treasure from Acorn TV that deserves to be found

“So to work on ‘Jurassic World’ and then go down and stay in a pub in Suffolk and make “Detectorists” is great. “Mackenzie [Crook – his co-star and the writer and director of “Detectorists”] and I talk about it a lot because obviously he does ‘Pirates of the Caribbean’ and stuff, and it just is fantastic. Neither one is better, you know. It’s just a huge contrast.”

That this English character actor won over his British brethren for his critically acclaimed performance as the hapless Lance is no surprise. He has been racking up raves for each change-of-pace part for years.

Last year, he had two such roles in the running at the Emmys: his star turn as the a do-good lawyer in “Agatha Christie’s The Witness for the Prosecution” and his scene-stealing featured role as a man bent on murder in “Sherlock: The Lying Detective.” After all, he already earned an Emmy nomination for his astonishing transformation into Alfred Hitchcock in the telefilm “The Girl.” And he first came to fame for his portrayal of Truman Capote in “Infamous.”