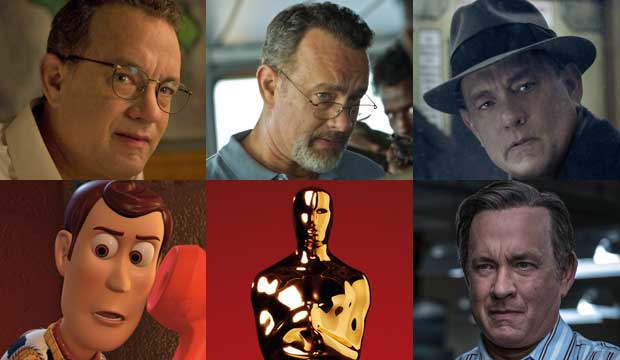 Tom Hanks used to be synonymous with Oscars, earning five nominations and two wins between 1989 and 2001, but lately he can’t get arrested. It’s not that he’s stopped making Oscar movies. Quite the opposite. Since the last time he was nominated by the academy he has been in five Best Picture nominees without a nomination of his own: “Toy Story 3” (2010), “Extremely Loud and Incredibly Close” (2011), “Captain Phillips” (2013), “Bridge of Spies” (2015), and now “The Post” (2017).

Granted, “Toy Story 3” was an animated film, and no voice-over actor has ever been nominated for a competitive Oscar. And his role in “Extremely Loud and Incredibly Close” was relatively brief and would have been unlikely to register with Oscar voters even under the best of circumstances. But he played leading roles in “Captain Phillips,” “Bridge of Spies,” and “The Post,” and he earned major precursor nominations for two of them.

“Captain Phillips” was his biggest snub. For playing the title role in that fact-based thriller, Hanks earned nominations from the Golden Globe, Critics’ Choice, SAG, and BAFTA Awards, but even though the Oscars nominated the film for six awards, Hanks wasn’t among them. “Bridge of Spies” was somewhat anomalous: though it was a major awards player all season and also received six nominations at the Oscars, Hanks was never in the conversation for Best Actor. In fact, he wasn’t nominated by anyone, not a single press or industry group.

For “The Post” his pre-Oscar outcomes were somewhat mixed. For playing real-life Washington Post editor Ben Bradlee he was nominated at the Golden Globes and Critics’ Choice Awards and won Best Actor from the National Board of Review, but the film was shut out at the SAG and BAFTA Awards, perhaps due in part to the film’s late release, and by the time the Oscar nominations came around Tuesday morning no nomination was expected for Hanks.

But still, for an actor who is one of the most beloved in the industry and who was once beloved by the academy — he and Spencer Tracy are the only actors ever to have won back-to-back Oscars — it’s an impressive feat in and of itself to string together five Best Picture nominees without an acting nom to show for it. And that doesn’t even count other Oscar movies he could have been recognized for, like “Catch Me if You Can” (2002), “Road to Perdition” (2002), and “Charlie Wilson’s War” (2007).

Hanks accumulated his five noms and two wins in the span of just 12 years, but it has now been 17 years since his last nomination, Best Actor for “Cast Away” (2000). So what will it take to get Hanks back in Oscar voters’ good graces?