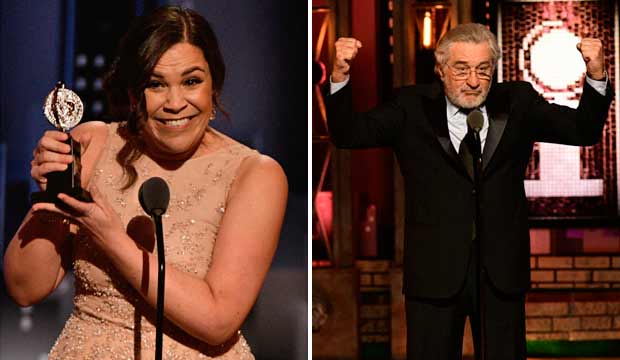 The 72nd edition of the Tony Awards has concluded. While this continues to be one of the best produced award shows on television, some aspects of this year’s presentation were better than others. So sit back and enjoy my take on the good, bad and ugly of this year’s Tony Awards (and check out the complete list of winners here).

The Tony Awards have the best acceptance speeches of any ceremony on television. The gracious nature of so many of the winners is always a highlight, and this year brought several new favorites to the forefront:

John Leguizamo probably had the best line of the night. While presenting Best Revival of a Play he told the story of how he was in Lee Strasberg’s acting class and how the infamous teacher passed away the same day as Leguizamo delivered an awful performance in his class. “My acting killed Strasberg.” There’s no topping that.

Josh Groban and Sara Bareilles also did pretty well as hosts of the telecast. I didn’t know what to expect from the rookie emcees, but they had a good opening number, decent comedy bits throughout the ceremony, and most importantly they kept things moving and didn’t descend into any awful bits that lasted too long. Kudos to them!

And I have to single out “The Band’s Visit” for choosing the “Omar Sharif” number to perform. It’s beautiful, and Katrina Lenk got to deliver some knockout notes, but I particularly enjoyed how the telecast direction captured the intimacy of the show.

It seemed inappropriate to show brief clips of Chita Rivera and Andrew Lloyd Weber accepting their Lifetime Achievement Tony Awards only to spend an extended amount of time with Groban and Bareilles singing songs associated with the two theater legends. Couldn’t they have included their speeches in the telecast rather than a hasty tribute by the hosts?

Robert DeNiro’s exclamation of “F*ck Trump!” got a round of applause from the audience at Radio City, but it was uncalled for in my opinion. By no means am I defending Donald Trump‘s performance as president, but during an evening that included so many eloquent speeches about bringing people together and rising above divisions, this just felt unnecessary.

The “In Memoriam” segment was respectful, but there could have been a bit more to highlight each person’s achievements than just a photo of them.

I said it last year, and I’ll say it again: I don’t need the segments of Rachel Bloom talking backstage, wearing different-sized hats, and wishing me a “Happy Daddy’s Day.” It didn’t add anything to the telecast.

It seemed like the Tonys were finally finding proper ways to showcase the nominees for Best Play. Last year each author briefly discussed their nominated show, and that focus on playwrights was well received. However, all of that was scrapped this year, and the telecast just showed brief clip montages as each name was read as a nominee. And if that wasn’t bad enough, the producers of the telecast completely cut off Jack Thorne, the author of “Harry Potter and the Cursed Child,” when he was accepting Best Play.

The producers also decided to take the Best Score category out of the main telecast and instead presented it during a commercial break, showing just a brief clip of the award on the air. At an awards show honoring the best musical theater on Broadway this is clearly one of the most important categories of the evening. But the time that could have been spent letting us see David Yazbek accept the first Tony Award of his career for “The Band’s Visit” was instead taken up by a number from the Donna Summer musical (which wasn’t even nominated for Best Musical) and, it pains me to say, a rambling monologue by Special Tony winner Bruce Springsteen.