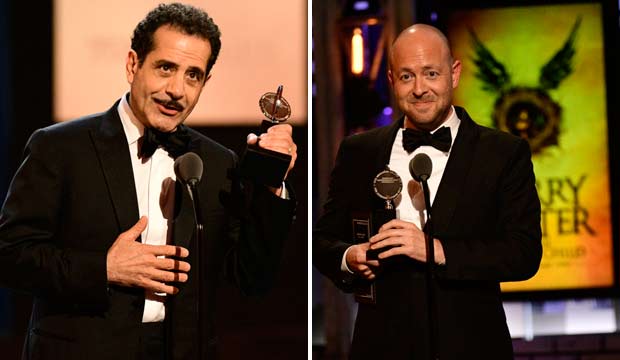 Out of all the winners (and losers) in the 26 competitive categories at the 2018 Tony Awards, several of them stand out as particularly noteworthy when considered in the context of history. So what were this year’s most interesting facts, records and milestones?

“The Band’s Visit” is the first Best Musical winner to have been based on a movie since “Kinky Boots” in 2013. Of its 11 Tony nominations it managed to win a whopping 10 awards (including Best Musical). The only prize it didn’t end up taking home was Best Scenic Design of a Musical for Scott Pask. It is now tied with “Hello, Dolly!” (1964) and “Billy Elliot” (2009) as the third most awarded production in Tony history, behind “The Producers” with 12 wins in 2001 and “Hamilton” with 11 victories in 2016.

“The Band’s Visit” is also the first Best Musical winner to have won every single acting award it was nominated for since “Jersey Boys” in 2006. And Tony Shalhoub and Katrina Lenk are the first pair from the same musical to have won both lead acting categories since Marissa Jaret Winokur and Harvey Fierstein for “Hairspray” in 2003.

But while “The Band’s Visit” achieved almost a clean sweep of its nominations, poor “Mean Girls” received no awards out of its 12 nominations, tying it with “The Scottsboro Boys” (2011) as the biggest shutout in Tony history.

“Harry Potter and the Cursed Child” is the first Best Play winner to have not won an acting award since “Vanya and Sonia and Masha and Spike” in 2013. It is also the first play to have completely swept all four design categories (Scenic Design, Costume Design, Lighting Design and Sound Design) since “Peter and the Starcatcher” in 2012.

After having previously won on the musical side for “Once” in 2012, director John Tiffany not only received his second career Tony for helming “Harry Potter,” but he also becomes just the sixth to win directing prizes for both plays and musicals. He joins the ranks of Michael Blakemore (“Copenhagen” and “Kiss Me, Kate,” both in 2000), Stephen Daldry (“An Inspector Calls” in 1994, “Billy Elliot” in 2009), Nicholas Hytner (“Carousel” in 1994, “The History Boys” in 2006), Joe Mantello (“Take Me Out” in 2003, “Assassins” in 2004) and George C. Wolfe (“Angels in America: Millennium Approaches” in 1993, “Bring in ‘Da Noise, Bring in ‘Da Funk” in 1996), who’ve all managed to win Tonys in both directing categories.

“Once on This Island” is the first production to have won Best Revival of a Musical and nothing else since “Hair” in 2009. But it actually fared better than the original production of the show, which sadly went home empty-handed on Tony night back in 1991.

This year marks the first time that the nominees for Best Musical Revival (“Carousel,” “My Fair Lady” and “Once on This Island”) each took home at least one award since 2011. But that season there were only two revivals: “Anything Goes” and “How to Succeed in Business Without Really Trying.”

When the original Broadway production of “Angels in America: Millennium Approaches” competed at the 1993 Tony Awards, Ron Leibman won Best Actor as Roy Cohn while Stephen Spinella won Best Featured Actor as Prior Walter. But with both parts of the play performed in repertory this year, that was reversed at this year’s awards: Andrew Garfield won Best Actor as Prior Walter while Nathan Lane won Best Featured Actor as Roy Cohn.

Also, after winning two Tonys for Best Actor in a Musical (“A Funny Thing Happened on the Way to the Forum” in 1996, “The Producers” in 2001), Nathan Lane has now claimed his first prize for his performance in a play.

Jackson’s victory also means that three out of the last four winners for Best Actress in a Play have managed to complete the triple crown of acting in the process. Helen Mirren (“The Audience” in 2015) and Jessica Lange (“Long Day’s Journey Into Night” in 2016) prevailed after having already won Oscar and Emmy, and now so did Jackson.

After having won as a Best Actress last year for the play “A Doll’s House, Part 2” Metcalf is now just the third actress in history to have won Tonys for lead and featured performances in consecutive years. The other two were Shirley Booth (Featured for “Goodbye Mr. Fancy” in 1949, Lead for “Come Back, Little Sheba” in 1950) and Sandy Dennis (Featured for “A Thousand Clowns” in 1963, Lead for “Any Wednesday” in 1964).