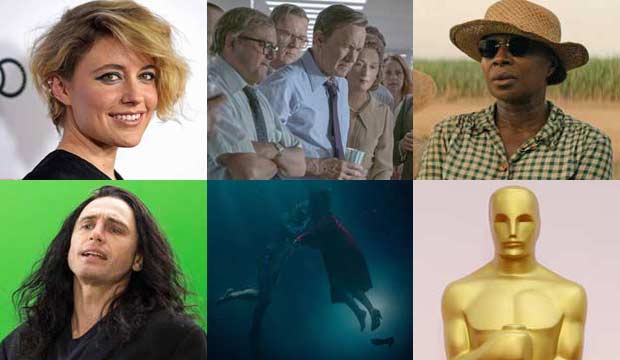 What shocking Oscar snubs could happen Tuesday morning? They might not be as surprising as you think. Though the odds may be in their favor, these contenders throughout the major categories might be losing sleep tonight as they await the nominations announcement. Here are the top five jaw-dropping omissions that might conceivably happen:

SEE2018 Oscars: Predictions in all 24 categories at the 90th annual Academy Awards

Okay, this one is a little out there, but hear me out. Despite its Golden Globe, BAFTA, WGA, and Critics’ Choice nominations, “The Shape of Water” is competing in one of the most jam-packed Original Screenplay races in recent history. There are close to a dozen viable contenders, including guild nominees “The Big Sick,” “Get Out,” “I, Tonya,” and “Lady Bird,” Globe winner “Three Billboards Outside Ebbing, Missouri,” and Best Picture possibilities “Darkest Hour,” “Dunkirk,” “The Florida Project,” “Phantom Thread,” and “The Post.” What makes “The Shape of Water” vulnerable despite its fourth place odds of 15/2 is that it’s viewed as a directorial achievement above anything else. Guillermo Del Toro, in fact, is favored to win Best Director after his Critics Choice and Globe victories. Will the writers branch assume he’ll reap his reward elsewhere?

Given recent events surrounding the #MeToo movement, this one may not seem that unreasonable. But remember, stories of James Franco‘s sexual impropriety allegations didn’t break until the day before Oscar voting ended, so he might not be affected by that. However, he might have been vulnerable anyway. Sure, this fifth-place competitor with 10/1 odds won the Golden Globe as Best Comedy/Musical Actor for embodying cult filmmaker Tommy Wiseau in “The Disaster Artist.” But he missed at the BAFTAs despite reaping SAG and Critics’ Choice noms (he won their award for Best Comedy Actor the day the news broke). And if enough academy members waited until the last minute to cast their ballots, they may want to avoid controversy and support someone like Denzel Washington (“Roman J. Israel, Esq.”) or Tom Hanks (“The Post”) instead.

Singer Mary J. Blige won raves for disappearing into the role of a 1940s farm worker in “Mudbound.” Nominations at SAG, the Golden Globes, and Critics’ Choice Awards propelled her to 4th place odds of 9/1. Yet is the academy ready to embrace Netflix? After all, Idris Elba looked like a sure thing for their flagship film “Beasts of No Nation,” but the Oscars snubbed him despite Globe, BAFTA, and SAG noms (Elba eventually won at the guild, making him the only person to do so without a corresponding Oscar bid). BAFTA, in fact, omitted Blige in favor of Lesley Manville (“Phantom Thread”) and Kristin Scott Thomas (“Darkest Hour”). That may just be the Brits supporting homegrown talent, but it could also be a sign of things to come.

Yes, Gerwig received DGA and Critics’ Choice nominations for her solo directorial debut “Lady Bird,” giving her third place odds of 5/1. And yes, the #MeToo movement increases the pressure to recognize a woman in this category for only the fifth time in history, especially after Natalie Portman called out the Golden Globes for their all-male nominees. Yet not only did the actress-turned-filmmaker miss both Globe and BAFTA directing noms (though she was recognized for screenwriting at both events), but her film went home empty-handed at both SAG and Critics Choice. Is the film not as strong as we think? And while the guild recognized her achievement, the more mercurial academy directors branch may resist the notion of having to vote for someone under pressure just because it’s the right thing to do.

On paper, this should be a slam dunk Oscar contender. Directed by Steven Spielberg, starring Meryl Streep and Tom Hanks, and centering on timely subject matter, “The Post” was as close to a Best Picture lock as you could get. Seth Meyers even joked about its inevitable victories during his Golden Globes monologue. Yet it went home empty handed that night despite six nominations. It then lost all eight of its Critics’ Choice bids before missing out entirely at SAG, WGA, DGA, and BAFTA. What happened? Did its December release date hurt it? Even 20-time nominee Streep is vulnerable given her SAG and BAFTA snubs. “The Post” has slipped from its perch to sixth place in our predictions with 10/1 odds, but is even that too generous? It seems inconceivable given its pedigree, but baitier flicks have gotten the shaft.

'Puss in Boots: The Last Wish' director Joel Crawford on doing a sequel over a decade after the first one [Exclusive Video Interview]