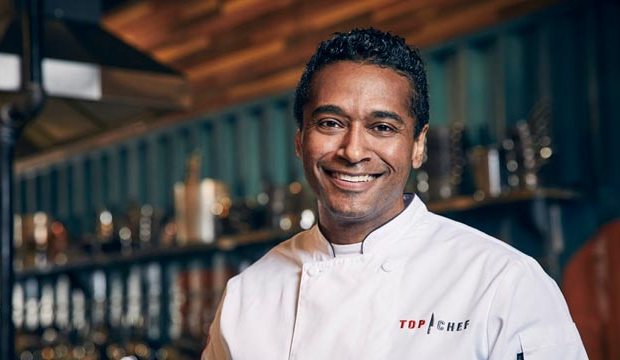 Thursday night on Bravo, the remaining four “Top Chef” contestants eagerly awaited to find out who would re-enter the competition from Last Chance Kitchen. Later, the Final 5 players had to create a dish using the medical beverage sarsaparilla. With the season finale around the corner, Season 15 is still anyone’s game to win. Who failed to make the cut with the judges this week?

Below, check out our minute-by-minute “Top Chef” recap of Season 15, Episode 11, titled “Cooking High,” to find out what happened Thursday, February 15. Then be sure to sound off in the comments section about your favorite chefs, which dishes from the episode looked the tastiest and who you think can go the distance to join the “Top Chef” winners list. Keep refreshing/reloading this page as we’ll be updating live.

8:59 p.m. – In last week’s 10th episode Christopher Scott won the Quickfire challenge, his second of the season. Bruce Kalman was the unlucky chef who was asked to turn in his knives thanks to his dish (roasted duck with toasted barley and corn, topped with salsify) having technical issues. Whose dreams will go up in flames tonight?

9:02 p.m. – To kick off the finals, the chefs depart Denver and head to scenic Telluride, Colorado. In their hotel room, they have a note from Padma Lakshmi instructing them to meet her at a saloon in town the following morning. There she introduces the first stage of the finals with guest judge Wylie Dufresne and series judge Tom Colicchio. With the saloon beverage, sarsaparilla, as inspiration, the chefs must cook their final Quickfire of the season.

9:06 p.m. – Tom is on hand to bring in the fifth finalist, winner of Last Chance Kitchen, Joseph Flamm! He’s joining in on the Quickfire and will compete in the finals going forward.

9:16 p.m. – In the challenge, the judges preferred Christopher’s chicken fried steak, Joe Sasto‘s halibut crudo, and Carrie Baird‘s crostini, but Adrienne Cheatham‘s glazed chicken and Joseph’s pork porterhouse both lacked a sarsaparilla so they were on the bottom. The winning dish was the one that highlighted the sarsaparilla the best and that was Carrie. Her second win for toast!

9:19 p.m. – For the main challenge, the chefs will be cooking a high concept dish at high altitude and must incorporate at least one baked element into their plate. This is a daunting task because cooking at high altitudes changes boiling and baking temperatures from what chefs are used to.

9:31 p.m. – The challenge takes place at 12,000 feet at Alpino Vino, the highest restaurant in America. The night prior, the chefs are visited by the judges and given tips on how to properly cook at altitude, but that doesn’t fully settle their nerves as they prep their dishes in the high altitude kitchen.

9:39 p.m. – In sequence, the chefs present: Joseph’s buttermilk pork loin with a baked component of a goat cheese-buttermilk biscuit has a lot of texture and the judges refer to it as well-balanced; Carrie’s wagyu ribeye with a baked component of corn bread lacks a point of view, but is executed properly; Joe’s roasted duck with a cherry puff baked on the side is cooked perfectly and one of the season best, but the cherry puff lacks the excitement the judges were looking for; Adrienne’s lobster with mountain bread and caviar brought smiles to the judges’ faces and they’re impressed by the confidence in her dish, and; Christopher’s black pepper quail with corn pudding and maple & bacon cornbread is delicious, but the fry on the quail comes out overcooked.

9:50 p.m. – At Judges’ Table, Tom called the food collectively the best they’ve presented all season. The three favorite dishes came from Joseph, Joe and Adrienne. Joseph’s was focused and layered, Joe’s was perfectly cooked and had dimension and Adrienne’s was a classic updated perfectly and she exhibited a transformation in her own cooking. The overall winner had the clearest vision and best high altitude baking, Joe!

9:52 p.m. – That left Christopher and Carrie in the bottom. All of the judges loved Christopher’s cornbread, but the rest of the dish lacked vision. The struggle with Carrie’s dish was the cohesion despite each part being delicious.

9:59 p.m. – With a difficult decision of eliminating a chef for a dish they generally loved, the judges ultimately decide that Christopher fell a little bit short and would be leaving the competition for his few technical mistakes.

Who will be eliminated? Christopher Scott

Who will be in bottom 2, but safe? Carrie Baird

Who will win the main challenge? Joe Sasto

Who will win the Quickfire challenge? Carrie Baird

Be sure to make your predictions so that the contestants can see how they’re faring in our racetrack odds. You can keep changing your predictions until just before the next episode airs on Bravo. You’ll compete to win a spot on our leaderboard and eternal bragging rights. See our contest rules and sound off with other fans in our reality TV forum. Read more Gold Derby entertainment news.

Are Emmy wins on the menu? 'Top Chef's' Tom Colicchio shares his reaction to his show's 4…

'Top Chef' host Tom Colicchio on the key to winning: 'When you can cook using your personality it seems…

'Top Chef' winner Melissa King on that last challenge: 'All three of us felt so proud of what we had…

'Top Chef' finale recap: 'Finito!' was an epic Italian showdown for the last 3 All-Stars, so who won the…

We've underestimated 'Top Chef' All-Star Stephanie Cmar all season, and now she could win the whole…

Can Bryan Voltaggio make a comeback to win 'Top Chef: All-Stars L.A.' after those brutal critiques in…

Is Melissa King a lock to win 'Top Chef: All-Stars L.A.'? She has the best track record by far, but…