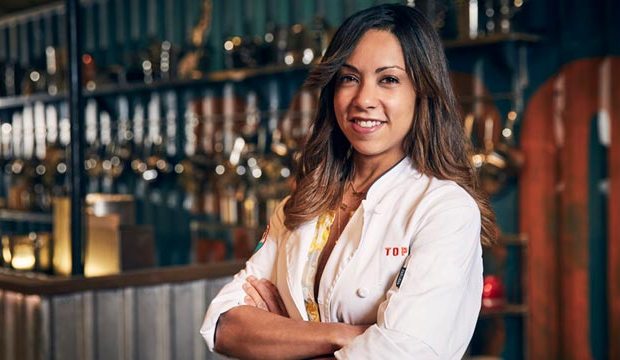 Which aspiring chef failed to impress the judges this week in Season 15 of Bravo’s “Top Chef”? In Thursday’s seventh episode, the chefs were tasked with creating a breakfast dish using Nutella. Later, Olympians Meryl Davis, Gus Kenworthy and John Daly instructed the chefs to focus on precision, speed and creativity in a special challenge dubbed the Top Chef Olympics.

Below, check out our minute-by-minute “Top Chef” recap of Season 15, Episode 7, titled “Olympic Dreams” to find out what happened Thursday night. Then be sure to sound off in the comments section about your favorite chefs, which dishes from the episode looked the tastiest and who you think can go the distance to win the title of “Top Chef.” Keep refreshing/reloading this page as we’ll be updating live.

9:59 p.m. – In last week’s episode two players went home: Brother Luck was eliminated for veering too far away from the scope of the challenge and all star alum Lee Anne Wong voluntarily left the competition after a severe bout of altitude sickness. Hopefully we only see one chef head to “Last Chance Kitchen” tonight, but who will it be?

10:03 p.m. – Surprising the chefs at home at six in the morning, host Padma Lakshmi introduced the contestants to Brooke Williamson, past champion of the series, who served as a guest judge for this week’s Quickfire Challenge. The early start to the day was because for this challenge the chefs cooked breakfast featuring Nutella. Winner of the challenge won immunity in the Elimination Challenge and $5,000.

10:13 p.m. – With very little room in their standard home kitchen, the hardest part of the Quickfire was definitely finding space and tools to properly cook their dishes. The chefs that managed to overcome that obstacle best to present Padma and Brooke with their favorite dishes were Carrie Baird, Claudette Zepeda-Wilkins and Fatima Ali. On the other side of things, they weren’t as impressed with Joseph Flamm‘s salty oatmeal, Tanya Holland‘s over-sweet waffle and Adrienne Cheatham‘s dry french toast waffle. In the end, the winner was Carrie for her savory eggs benedict.

10:17 p.m. – After breakfast, Padma told the contestants that for their Elimination Challenge they’d be inspired by the upcoming Winter Olympics as they compete in teams of three in a head to head showdown to display their teams speed, precision and creativity. In the first round, one chef would feed diners in 45 minutes (speed), in the second round another chef would cook a protein perfectly while showing off three distinct knife cuts (precision) and in the last round the third chef would create a freestyle dish (creativity).

10:30 p.m. – In the speed round, it was Bruce Kalman vs. Claudette vs. Fatima. In the precision round it was Joseph (chicken) vs. Tanya (lamb chops) vs. Adrienne (filet). And in the third round, Christopher Scott vs. Carrie vs. Joe Sasto all cooking short ribs. At the start of the challenge, Tanya, already disappointed that she got stuck with precision over speed, gets frustrated by how often Claudette is pulling her away from her attention to her precision cuts to help her on the speed dish instead.

10:39 p.m. – In the speed round, Bruce prepared a creamy polenta, Fatima cooked a seared scallop and Claudette served pork belly with grits. Of the three, the judges scored 47 for Fatima (red team), 41.5 for Claudette (white team) and 50 for Bruce (blue team).

10:43 p.m. – In the second round, Tanya and Claudette continued to butt heads, creating unneeded tension in their part of the kitchen. For the temperature part of this stage, Tanya’s temp was far off, deducting 6 points straight off the top of any of her team’s scores for the round. That’s a huge blow for the white team that already scored the bronze medal in the first round!

10:49 p.m. – Adrienne roasted a filet with a kale salad, Tanya did a leg of lamb with couscous and Joseph  served a roasted chicken with squash. According to the judges, Tanya really suffered on her knife cuts as well as her temperature. For the scores, Adrienne (red team) earned 40.5, Tanya (white team) earned 18.5 and Joseph (blue team) earned 42.5 for the gold once again.

10:54 p.m. – And in the final round, Carrie made beef short ribs with fettuccine, Christopher braised his short ribs Korean style and Joe used the short ribs for a casoncelli. For scores, Carrie (red team) got 35, Christopher (white team) got 51 and Joe (blue team) got 51.5, barely earning the third gold for his team and likely sending the white team to the bottom.

11:02 p.m. – At Judges’ Table, the blue team were the obvious group to choose the challenge winner from. Joe, Bruce and Joseph were applauded for how in synch they were throughout the competition as well as how fast, precise and creative each of their dishes were. But the overall winner was Joe, who Tom said executed a flawless dish.

11:04 p.m. – With the lowest overall team score, Christopher, Tanya and Claudette were called forward as the three chefs that would be up for elimination. Though they liked Christopher’s dish a lot, the judges said the tofu cream on the plate was a bit unnecessary and detracted from the otherwise great components. Tanya was knocked for her poor knife skills as well as the huge mistake of not knowing which temperature she’d be cooking her lamb at which caused a huge deduction of points despite cooking it perfectly. Claudette was called out for not completing her speedy dish, but her explanation came out as mostly excuses and when Tanya was asked by the judges for her side of the story, Tanya gave a lot of attitude to the judges and the whole deliberation became pretty uncomfortable.

11:13 p.m. – At the end of the day, the judges’ decision came down to which chef’s skills weren’t demonstrated in the task that they were asked to compete in and that was Tanya. She’ll now head to “Last Chance Kitchen” for a chance to re-enter the competition later.

Who will be eliminated? Tanya Holland

Who will be in bottom 2, but safe? Christopher Scott and Claudette Zepeda-Wilkins

Who will win the main challenge? Joe Sasto

Who will win the Quickfire challenge? Carrie Baird