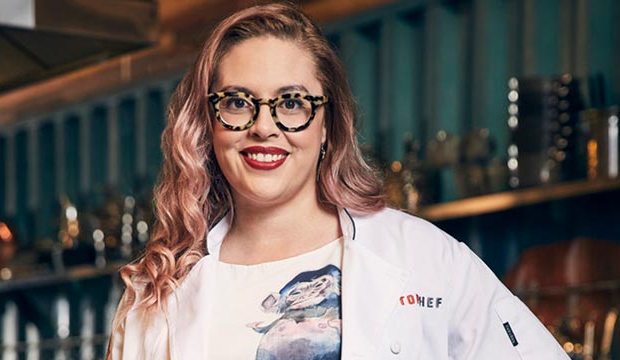 Which aspiring chef failed to impress the judges this week in Season 15 of Bravo’s “Top Chef”? With only eight chefs currently in the competition, in Thursday’s eighth episode, it was time for the seasonal tradition: restaurant wars! The chefs were divided into two teams of four, each tasked with creating a pop-up restaurant on the fly that would host a full night of service to patrons and the judges.

Below, check out our minute-by-minute “Top Chef” recap of Season 15, Episode 8, titled “Too Cold and Too Hot,” to find out what happened Thursday night. Then be sure to sound off in the comments section about your favorite chefs, which dishes from the episode looked the tastiest and who you think can go the distance to win the title of “Top Chef.” Keep refreshing/reloading this page as we’ll be updating live.

9:59 p.m. – In last week’s episode we said a temporary goodbye to Tanya Holland who joined previously eliminated Brother Luck in “Last Chance Kitchen” to compete for a chance to re-enter the main competition later in the season. Brother defeated Tanya in that showdown and awaits a new challenger. Which chef will exit the main competition to night to face off against Brother? Restaurant wars has been the unlucky for challenge for frontrunners in the past so anything is possible tonight!

10:17 p.m. – Arriving at Mile High Station, a huge empty space perfect for what they’re all expecting (restaurant wars!), Padma Lakshmi has the chefs draw knives to determine which two will be team captains. Carrie Baird and Christopher Scott draw the captain knives. Carrie chooses Bruce Kalman, Joseph Flamm and Adrienne Cheatham. Christopher goes with Joe Sasto, Fatima Ali and Claudette Zepeda-Wilkins. This season, each team is asked to produce a menu with a three course meal, where each course has three options. That’s right, that means they’ll have to prepare nine unique dishes for their patrons to choose from.

10:20 p.m. – Because of the large work load, each team was also given the chance to choose one of the eliminated chefs to join their team just for this challenge. Carrie added Tyler Anderson and Christopher picked up Brother!

10:23 p.m. – Christopher’s team names their restaurant Common Place, inspired by them bringing all of their different experiences and styles into one vision. When deciding on a menu, the group disagrees about what direction they should go in regarding their menu. Carrie’s team on the other hand immediately decides on a Italian-Mediterranean menu and takes Carrie’s suggestion of calling their restaurant Conifer.

10:28 p.m. – As far as roles go, Conifer chose Claudette and Common Place chose Bruce to be executive chefs, managing the back of the house for each space.

10:48 p.m. – During prep time, Common Place had turned their chemistry around to get to a place where they were working really well together and as a cohesive unit while Conifer was intimidated by how well the others were working and found themselves struggling to get to the same place.

10:53 p.m. – At service time, as executive chef, Bruce got off to a rocky start on the line being fussy with the presentation of the dishes and being a little more bossy than his chefs would have liked. The judges were pleased with the design of Conifer’s space and referred to their menu presentation as one of the nicest they’d seen. In terms of their food, their first courses were crowd pleasing if not safe and second courses had outstanding flavors, but the plates were too hot when the food was put on them and it impacted the quality of the sauces and overall taste of the food.

11:03 p.m. – Halfway through service, Common Place had developed a wait at their restaurant and Fatima, in the front of the house there, became worried that if the judges arrived during the wait that they’d be delayed in getting to a table. Back at Conifer, the judges were impressed by all three of the options for their third course (desserts!). Overall, the judges found Conifer’s presentation to be a success.

11:04 p.m. – When the judges arrived at Common Place, although they didn’t have to wait they did notice that other patrons were waiting. In terms of reactions to their food, the first course suffered from a lack of flavor and the menu items themselves didn’t seem cohesive, the second course was an improvement especially in terms of presentation but the quality of cooking and flavor was inconsistent and by the third course the vision of the concept was still missing.

11:15 p.m. – At Judges’ Table, the decision was unanimous that Conifer performed better than Common Place and was the winning team. The cohesion of their concept was pivotal in their decision, but Joseph’s front of house presentation was also highlighted as well as Joseph’s duck (cooked for him by Adrienne), Carrie’s beet salad and Bruce’s polenta. The overall winner though was an easy call for the judges and it went to Joseph’s exceptional hospitality.

11:19 p.m. – The criticisms of Common Place were Fatima’s lackluster presence in the front of the house, Joe’s dishes and the group’s overall lack of flavor across the board. There was also the lack of cohesion of their menu items and the concept of the restaurant. Christopher came under fire as the team captain and his decision to forego being executive chef and putting Claudette in the role instead.

11:27 p.m. – Ultimately, the judges felt like Common Place had a good idea, but the execution of it failed to come together. As an executive chef that wasn’t owning up to her responsibilities, Claudette was eliminated. She wasn’t happy about it and kind of stormed off. She’ll return to Last Chance Kitchen for her second chance to re-enter the competition!

Who will be eliminated? Claudette Zepeda-Wilkins

Who will be in bottom 2, but safe? Joe Sasto, Fatima Ali and Christopher Scott

Who will win the main challenge? Joseph Flamm

Who will win the Quickfire challenge? n/a